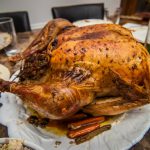 Thanksgiving is a holiday that’s rich with traditions. Families and friends gather together to enjoy each other’s company and express their gratitude towards one another. Televisions emit various football games and “Black Friday” commercials, as the family kitchen becomes a hotbox of seasonal flavors and scents. Yeah, this is one holiday you can count on for endless traditions.Personally, one of my favorite Turkey Day traditions is something that a lot of fellow smokers also partake in. While it may differ from family to family, the main thing I look forward to on this fateful day, is my pre-dinner “walk.” SEE ALSO: Get Ready For The “Big Game” With THC Buffalo WingsThis usually occurs when I hear that dinner is going to be ready within an hour. At this point, me and some equally-stoney family members and friends, excuse ourselves from the household altogether. Obviously, the goal here is to avoid being seen on the way out, but should any curious family members genuinely inquire about our destination, the best answer has, and always will be, “going on a walk.”For those who aren’t exactly “picking up what I’m putting down” I’m referring to us going out for a quick smoke session before dinner is served. This quick stone-and-stroll around the block always serves for some quality conversation and hearty laughs. SEE ALSO: Step-By-Step Recipe For THC Crab CakesAnd it's the perfect time of day to do it. People are busy inside their kitchens at this time, putting the finishing touches on their bird. Or, they’re like us, and going on a blaze-and-graze of their very own, in order to muster up a massive amount of hunger for that enormous dinner that awaits them. In which case, we merely offer them a smoke-filled nod of appreciation, as we continue our quick lap back to the house for some truly amazing food of our own. I mean, if you ask me, Thanksgiving just isn’t “Thanksgiving” without a “walk.”Speaking of, I firmly believe that this November holiday wouldn’t be as beloved as it is without its main component. And no, I’m not talking about turkey. I’m talking about everybody’s favorite dinner table superstar: gravy.Gravy just takes everything it touches to new heights of enjoyability with the utmost ease. That savory sauce never fails to brighten up a dish. That’s probably why it’s been a mainstay on Thanksgiving tables for centuries. While this brown boat of greatness is basically untouchable when it comes to Turkey Day, I have a way to increase its value tenfold – and it has everything to do with THC.SEE ALSO: Impress Your Friends With Some Cannabis-Infused Chocolate Banana MuffinsWe’re about to make some Cannabis Gravy, my fellow pilgrims. Excited? You better be, because this recipe is guaranteed to be a hit at the dinner table when that late autumn holiday rolls around. So tighten up those buckled hats, and let’s get down to business.But before we start breaking out the pots and the pans, we are going to have to make sure we have some THC-infused butter. Without that, this will just be a normal serving of yawn-worthy gravy. You can easily pick up some cannabis butter from your local dispensary. Most locations have more than a few tubs of this stuff, so feel free to stock up if that is the route you are choosing to take.Personally, I find myself so inspired by holidays, like Thanksgiving, that I’m damn near compelled to whip up a batch of my own. If you are wondering how to do the same, the process couldn’t be easier.While most of these recipes wait until the mid-to-end part of the process to add the cannabis-infused butter, we’re kicking things off with it for this gravy. This Cannabis Gravy is not only a delicious way to elevate your already-amazing Turkey Day, but it’s a super tasty way to get even higher during the meal.
Calories: 1941kcal

Now that you have some THC butter, we can move onto this Cannabis Gravy recipe (finally).