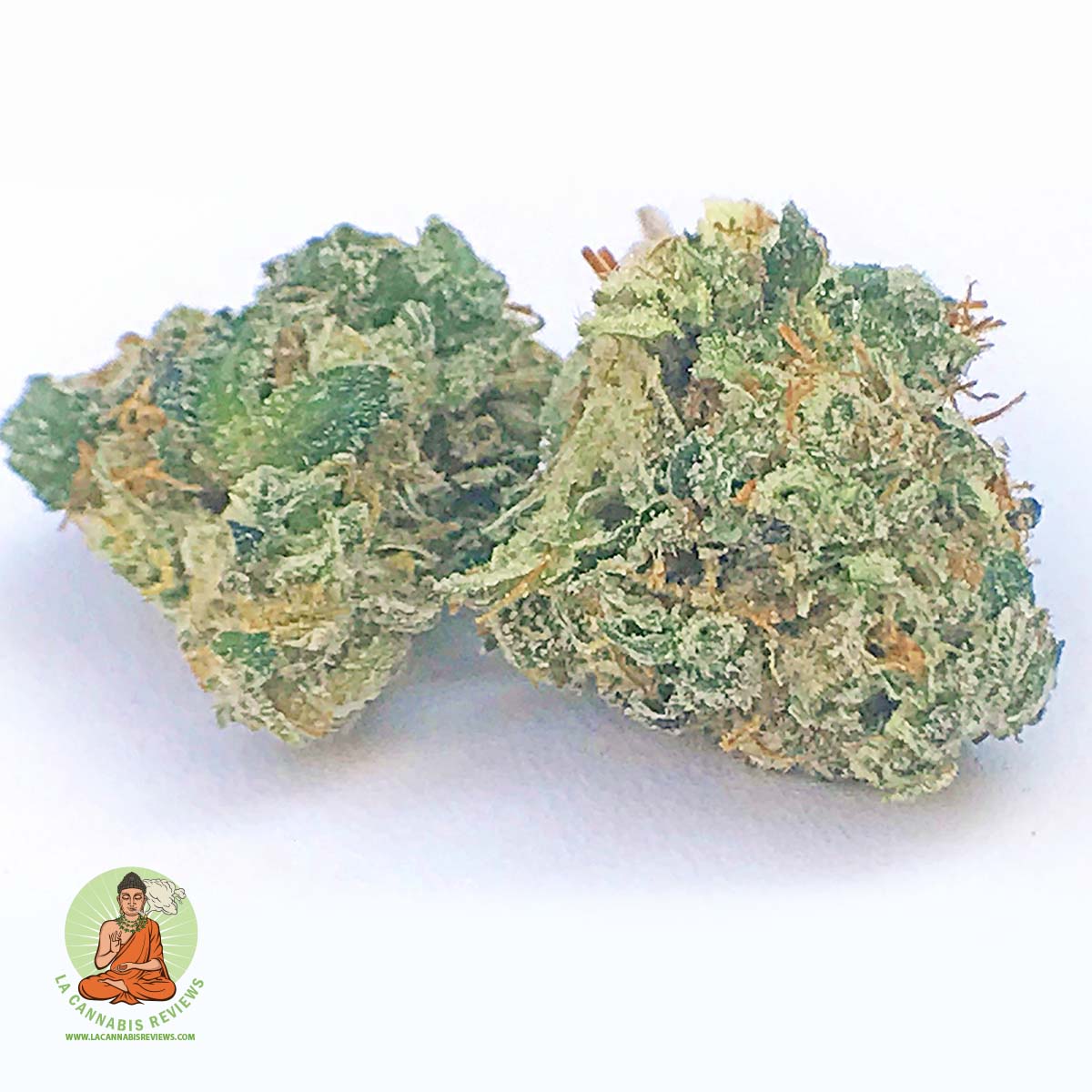 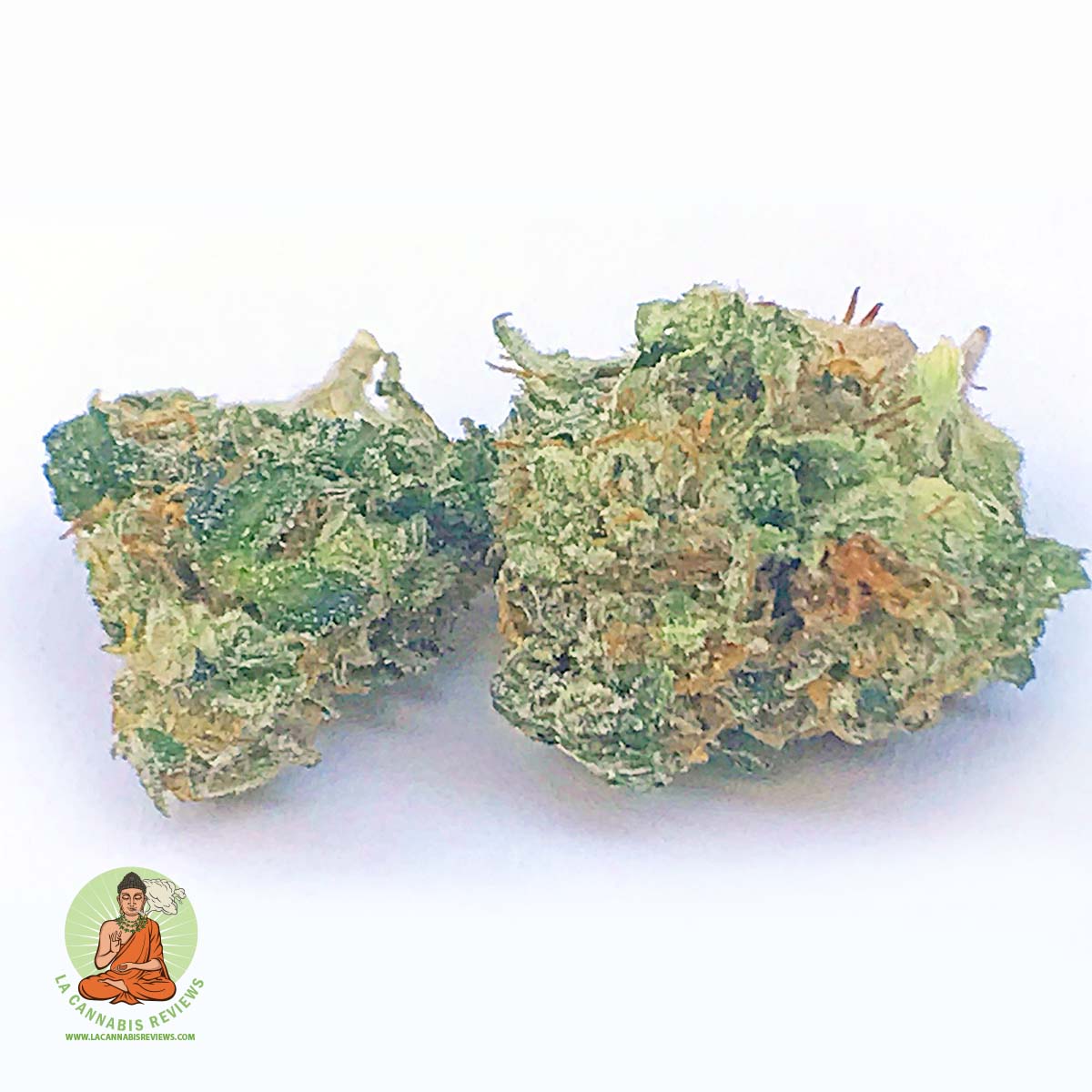 Appearance
The leaves of this plant possess a pattern of light and dark shades of green 80%
Aroma
This plant smelled fresh and natural, giving off a peppery aroma 80%
Taste
The smoke had a strong flavor, tasting quite dirty 40%
Effect
We were feeling really stoned really fast 80%

Full disclosure -- we saw Superbad five times while it was in theaters. We truly love this movie. And once we saw there was a strain named after it, we had to pick some up.

Appearance 4/5
The leaves of this plant possess a pattern of light and dark shades of green, alternating wonderfully like a quilt. The undersides of the pods are covered with white fuzz, making the light green appear even brighter. The pods of the flower, themselves, were spread open and loose, making it very easy to break apart.

Aroma 4/5
Perhaps we've been spoiled by the unicorn-like nature of most marijuana strain scents, but this flower gives off a much greener, earthier smell than we’re used to. This plant smelled fresh and natural, giving off a peppery aroma. It was strong and sour, sort of like a combination of Arugula and seaweed. We didn’t mind the deviation from the norm, in fact, we found it to be a breath of fresh air.

Taste 2/5
While we admired the fresh aroma of this flower, we didn’t care for how that fragrance left our tongue, as we burned it. The smoke had a strong flavor, tasting quite dirty, and the combination of the leafy greens and saltiness created a pungent, perfumey aftertaste that lingered, as we kept smoking. The heavy smoke only added to our distaste. While it didn’t have the carbon taste of truly bad bud, it was one of the harsher strains we’ve smoked in quite some time.

Effect 4/5
This may have been a Hybrid strain, but it’s effects came on like an Indica almost immediately. We were feeling really stoned really fast. We even experienced that sense of tunnel-vision, which distracted us from everything. Besides that, we were feeling other classic Indica symptoms, like the “munchies.”

Then, feeling weighed down by the high, we laid down, and didn’t do much else for a long period of time. Anyone wrestling with insomnia, or appetite issues, would do themselves a favor by picking this up. In our experience, we didn’t necessarily want to crawl under a blanket after we smoked this strain, but the effects were so powerful we found ourselves “under its spell” for a good long while. It’s not a bad thing, per se, it’s just not what we wanted.

Superbad is a Hybrid strain that left us feeling under a cloud, rather than taking us to “cloud nine.” Despite its Hybrid label, this smokes like an Indica, and has a powerful high that brings out all the classic pothead behavior -- including big appetite and sleepiness. If you’re looking for something to knock you out, or kickstart your appetite, this might be the bud for you. Otherwise, we would advise caution, since this strain carries such a strong kick.

Superbad is a classic movie, and we’d like to shout out this Superbad strain for giving us a classic stoned experience. Next time you want to chill at home with a movie, pick up this strain to create the perfect pairing.

What’s your favorite movie to watch while stoned?

This question was on our minds, as we dropped into Downtown Fantastic 20 Cap the other day. While we were picking up our bud, we threw the question out to the budtenders at the shop.

Which movie was their favorite?

All the obvious titles were brought up -- Half-Baked, How High, Pineapple Express, Friday, Harold and Kumar Go To White Castle, Cheech & Chong’s Up in Smoke -- all pretty good movies. They’re funny, fast-paced, and if you’re smoking weed, they’re very relatable.

But for our money, none of these movies were at the top of our list. We suggested our alternative titles, and were shocked to realize that the budtenders had not heard of most of them. If these movies have somehow flown under your radar, allow me to sell them to you...

Smiley Face: Anna Faris stars as a struggling actress (and stoner) named, Jane. She gets high and accidentally consumes an entire batch of her roommate’s cannabis-infused cupcakes. The rest of the movie is her trying to navigate the wild, wacky streets of Los Angeles -- all while being stoned out of her mind. This is a great stoner movie, and parts of it are so trippy, it could double as a great acid movie (just saying).

Everybody Wants Some: If you’re a cannabis connoisseur, then you’re no doubt familiar with that classic 90s comedy about the 70s, Dazed and Confused. This film was the spiritual sequel to that movie. It was also written and directed by Richard Linklater, and it follows the members of a college baseball team getting to know each other over the weekend before classes start in the fall of 1980. Sporting another killer period soundtrack, this is great “hangout movie” that captures the spirit of spending a lazy weekend with your friends perfectly. The jokes, the jockeying, the partying, the hangovers. Our favorite character is Willoughby, the stoner/philosopher played by Wyatt Russell. His performance was so epic, he deserves to be in the pantheon of great stoner characters of all-time.

The Naked Gun: This is our dark horse choice. Mainly because there’s zero drug content in the film whatsoever. But, to be fair, it is one of the funniest movies ever made. It’s an extremely silly parody of cop movies ( before parodies were just pop culture references).

Leslie Neilsen deadpans his way through an increasingly-absurd number of jokes and visual gags, which come at the viewer at a fast and furious pace. That’s what makes this movie a great stoned watch; you can still enjoy it without devoting your full attention to it.

Maybe it was because we had movies on our minds, but we ended up grabbing a strain named after another one of our favorite stoner comedies: Superbad.