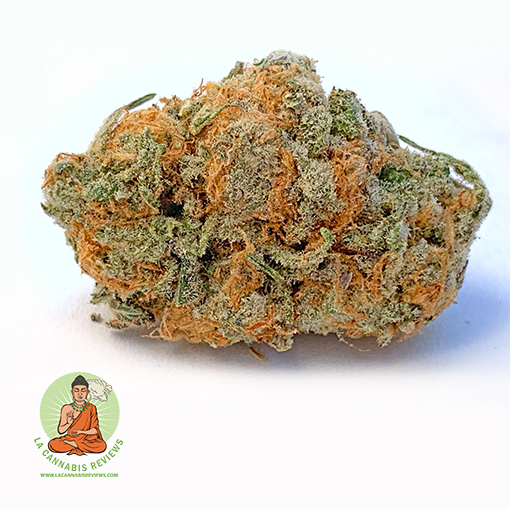 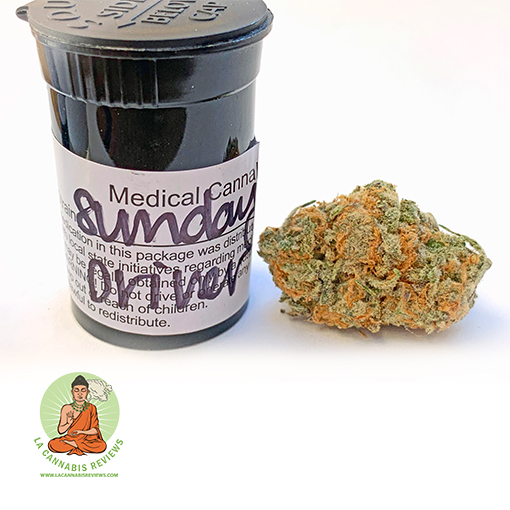 Appearance
Truly a beautiful plant 100%
Aroma
It’s sweet and floral, with some scents of banana and papaya shining through 100%
Taste
It was strong and acrid, and cut our throats like a razorblade 80%
Effect
Calm, peaceful, beautiful. Far out, groovy 80%

Where we come from, a “Sunday driver” usually pertains to someone who isn’t out on the road very much. Or, it’s a classic car, a real cherry ride, that only deserves to be driven on Sundays (usually, because it’s a gas guzzling road monster). It’s not just a ride, it’s a reward.

This Sunday Driver, however, wasn’t a car, it was a plant. So this strain of the ol’ “Sunday D” had better be something special, or it’s going to get left in the dust.

Appearance 5/5
One of the few strains of flowers where there’s actually more orange than green along the surface. The orange tendrils have taken over this plant, covering most of the pod, leaving the green, crystal-coated leaves in an alternating pattern - like a Hybrid chess board. Truly a beautiful plant.

Aroma 5/5
This Sunday Driver has a full-bodied aroma that is a virtual bouquet of fragrance. It’s sweet and floral, with some scents of banana and papaya shining through. All the aspects blended together into a tropical mix that had us wishing we had a tiki drink nearby.

Taste 4/5
There was a very light flavor to the smoke of this joint, but what stood out the most was its harshness. It was strong and acrid, and cut our throats like a razorblade. We would have lowered the rating even further, but despite the bad taste, it wasn’t harsh enough to ever get us coughing. But be warned that this is no ice cream sundae.

Effect 4/5
This medium strength Hybrid really hit us in both our Indica and Sativa spots. We felt the high in our brains instead of our sight, and our thoughts (and words) were both noticeably slowed. Not only that, but this smoke helped us drown out distraction from the rest of the world. It was like we had carved out our own little cosmic space to just be ourselves for awhile. Calm, peaceful, beautiful. Far out, groovy.

You know what?  We dug this ride. It was pretty cool.  A little heavy on the exhaust, but it was a smooth ride that slowed down time and made you feel like you were all alone in the world… just like being behind the wheel on a slow weekend morning.  While this won’t hold a permanent spot in our garage, we’re happy to tool around with this Hybrid for a little while.

We all wish that Security Guards weren’t part of the equation when we shopped at dispensaries. Not because we don’t like them, but because we just want to live in a world were such precautions would be unnecessary, or draconian, at best. But until the world becomes a better place -- which it might if more people got stoned more often -- we’ll accept dealing with Security as a necessary step in the process. Besides, in our experience, friendliness has always been met with friendliness, so we really can’t complain about anything.

Like our Mom used to say, “kill ‘em with kindness.”

When it comes to marijuana dispensaries, we often talk a lot about the location, the general vibe of the store, the product selection, the budtenders, etc. But what isn’t discussed as often, even though its a crucial element to the experience - both in the showroom and behind the scenes - is the Security.

Every dispensary we’ve ever been to has had some kind of Security Guard on duty. How that guard (or that shop) defines “on duty” is quite varied. We’ve seen fully armed and armored guards standing in the corner at the ready. We’ve also seen average looking dudes wearing a “Security” windbreaker sitting behind a counter playing on their phone with the occasional glance up to make sure there’s nobody trying to rob the place. Sometimes, they double as the person at the check-in desk, and sometimes they’re a free-floating entity that doesn’t have anything to do with the operation besides being a deterrent against shenanigans.

At best, they’re friendly and courtesy. At worst, they take their job too seriously, and they can be a nuisance. Indeed, one of the most common complaints on comment threads about dispensaries are rude or overly aggressive Security Guards. Most of the time they just yell at absent-minded customers to put their phones away while in the showroom, but sometimes they can be overly curt or stand-offish when checking you in.

This method of trying to “alpha” a customer before they enter the shop is mostly fear-based, since they can throw you out. But they cannot arrest you or harm you in any way. They just want to act like a tough S.O.B., so you don’t do anything “stupid.” Which, understandably, is their job, but you catch more flies with honey than vinegar, and sometimes these Security Guards leave your with a sour aftertaste.

On our last visit to the House of Herbal Healing Church -- which for the record, is a totally dope spot to buy your ganja -- we were greeted by Security at the check-in counter up front. They scanned our IDs, and returned them to us, and proceeded to point to two signs hanging on the wall. Then, gruffly told us to “read these rules” so we would not forget them. The two signs read -- “No cell phone usage” and “$10 Minimum Purchase.”

Obviously we read them very quickly. And we understood one of them -- a ban on cell phones in showrooms is standard operating procedure all across Southern California. But the second sign gave us pause, especially since we were pretty sure there was nothing for sale inside the shop that was less than ten dollars. At least, nothing that mattered anyway. It seemed very likely we would spend at least ten bucks, and extremely likely that it would be more than that. But a job is a job, and the Security Guard was just doing his. Honestly, it could have been a lot worse.

It’s a small price to pay for the opportunity to shop at HHHC, because they have some really great flowers. They have the best collection of untamed, non-corporate plants in the area, hands down. This time we went with a Hybrid strain that we hoped would take us for a pleasant ride -- Sunday Driver.