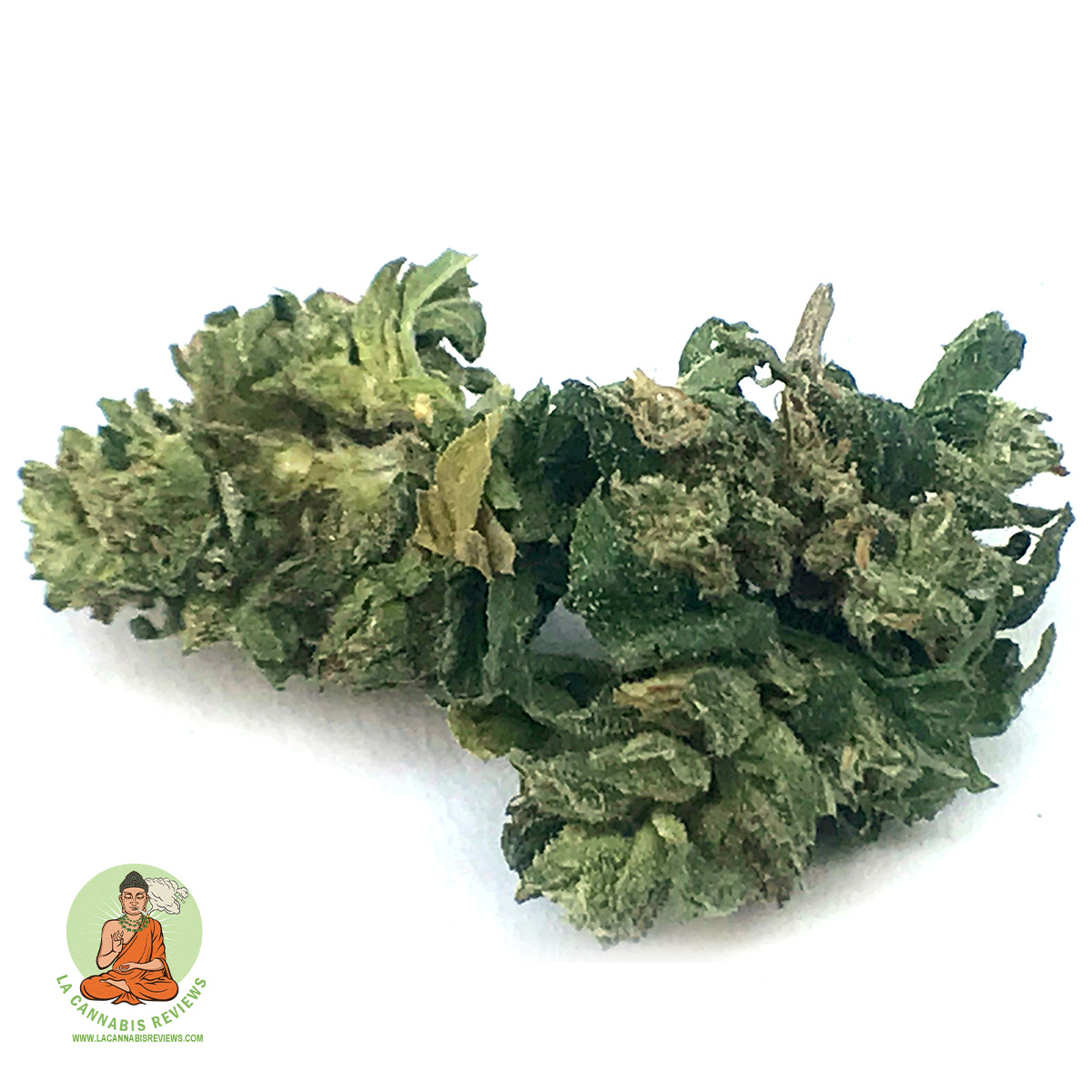 Appearance
This is one healthy-looking plant. 80%
Aroma
A very plum-like aroma. 60%
Taste
Beefy flavor as we exhaled 60%
Effect
My brain went into overdrive, and my synapses started firing at a rapid fire pace. 80%

SFV OG
SFV is an acronym for ‘San Fernando Valley.’ What was once a wide expanse of orange groves and other farmland, is now filled with movie studios and suburban developments. However, it has once again transformed itself into the northern neighborhood sprawl of Los Angeles, offering houses for sale with front yards and swimming pools, even with the grit, glitz, and glamour of Los Angeles being not too far away. Its reputation as a bedroom community or a suburban nightmare is undeserved, with several hip pockets of art and culture lingering around every corner. There’s also plenty of great restaurants to be found in this area. Would this Hybrid strain of SFV OG live up to these expectations, or would it be crushed by the weight of its reputation?

Appearance 4/5
This is one healthy-looking plant. The leaves here are a medium dark shade of green, with little pockets of orange that pop up. And they’re so dark, they almost look brown. We believe this plant was grown outdoors. Which would be very much in-line with the Valley and its mercury-breaking summer heat waves. It would also explain the overall darkness to the flower. Another symptom that leads us to believe this strain was grown outdoors is how leafy this bud was. It felt like it had been just pulled off a plant.

Aroma 3/5
This flower gave off a light, muted aroma that didn’t call much attention to itself. We dipped our noses down and took a strong whiff to get a better sense of what was going on. It was earthy, sweet, and almost sour. A very plum-like aroma.

Taste 3/5
While we had fruit on our minds when we were sampling this flower’s aroma, we experienced something else entirely once we started smoking it. Our inhale was unremarkable, but the smoke took on a more “beefy” flavor as we exhaled. It was dark and savory, like beef bullion, akin to that salty zing that comes from teriyaki sauce. It was quite an impressive feat, to say the least.

Effect 4/5
While I may cop to being a somewhat nervous person, I don’t have anxiety issues anywhere close to some people that I’ve known whom, incidentally, use marijuana to medicate themselves. So I’ve had experience with weed calming me down, but this might be the first time that weed actually gave me anxiety.

After smoking this strain, my thoughts tumbled down a rabbit hole, and I followed right along with it. My brain went into overdrive, and my synapses started firing at a rapid fire pace. It was certainly a boost, but the signal was too strong that I got lost in my surroundings. Needless to say, I was incredibly stoned.

Our experience with this SFV OG was surprising. This flower defied our taste and smell expectations, then took us for a ride through our own thoughts that ended up being wild and out-of-control like a game of Crazy Taxi. This Hybrid strain leans Indica, and produces a sensation that helped us focus our attention, but in an introverted type of way. If anyone has a problem with focus, or needs something to goose their productivity, this might be the strain for you.

Everybody wants something for free, and that’s the unfortunate truth that’s subsequently allowed this crooked system to continue operating. We don’t want to sound hypocritical, because not only are we customers of HMU, but we’ve perpetuated this cycle in the past, as well. We’re just not the biggest fans of it, that’s all.

We don’t want to call anyone out, including the competition, but there’s no way around it when discussing the issue we’re about to get into. It’s a simple fact that (until recently) Weedmaps was the only service of its kind. It was the first widespread catalogue of dispensaries that not only included the vital statistics, but the menu and pricing of a dispensary, as well. And it created a harmonious relationship with the dispensaries that it catalogued, often leading it to be the most common answer to that oft-asked question, “How did you hear about us?”

But there is a scam, or an obvious loophole, inside this system that works for nobody’s benefit. It’s something that most Angelenos have come across in their travels. It starts with a simple proposition, most likely posted on a sheet of paper and hung inside the showroom -- “LEAVE US A FIVE STAR REVIEW ON WEEDMAPS AND GET A FREE ______!”

It’s a pretty enticing offer. All you have to do is click five stars on an app, and you get something for free, usually a joint that’s been rolled in-house. So, it’s not even necessarily a great “something”, but it is for free. This tactic really works, though. For example, look at the dispensary, HMU.

HMU is not listed on Weedmaps. The listing that brought us there was for another dispensary, Angels Kush. That spot, for whatever reason, does not exist. HMU does exist, however, but at an address that’s next door to the one listed online. Which leads us to ask the questions: Why does Angels Kush still exist on Weedmaps? And why do they have current (and glowing) reviews?

We suspect that these reviews are the by-product of HMU’s offer to receive a free in-house joint in exchange for an excellent review. Most dispensaries disallow cell phone use inside their showrooms, but HMU’s budtender was willing to let us bust out our iPhone, so long as it meant writing a positive review.

This allows misinformation to be spread in exchange for a (token) prize. Notice how these free offers are never anything with real value. Usually they’re giveaways of dirt weed that the dispensary has in excess amounts. This system allows the listing for Angels Kush to thrive, even when almost everything about it is false.

In a perfect world, the users would use check-and-balances to help eliminate these white lies, much like the Wikipedia community. But, when the community is paid off, that’s when the system no longer works for us, but for those trying to swindle us.

We wish we could back up our vitriol by saying that we walked away from this false shop out of principle, but we did not. Instead, we participated in a broken system anyway, although we stopped short of leaving our own review.

Our injustice fires were burning, so we needed to burn some flower to calm down. That’s why we picked up some SFV OG.