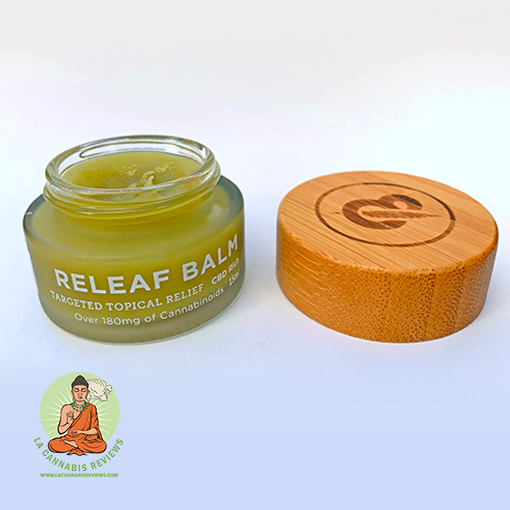 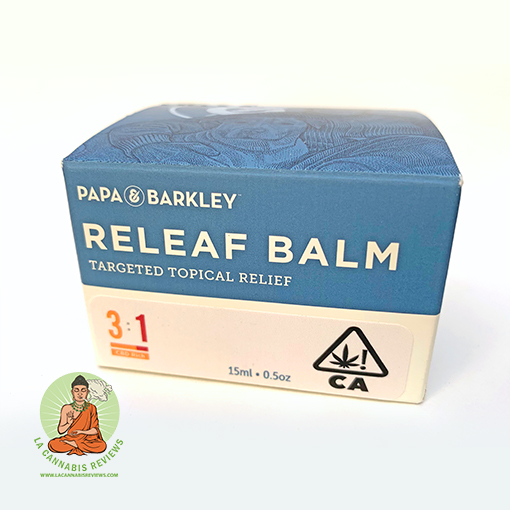 Appearance
The green shade it’s been given to remind you that it’s been infused with cannabis. 80%
Aroma
This balm was wonderfully aromatic 100%
Touch
This balm was surprisingly soft 100%
Effect
Our pain was markedly lessened, with movements and motion becoming easier and less painful 100%

This product is made by the Papa & Barkley company. Named after the founder’s father and his loyal pitbull (both immortalized on the product box), this company specializes in weaponizing THC and CBD for pain relief. They offer a number of exciting products, from topical patches to tinctures, and even bath salts. But this balm seems to be their flagship product, and we were excited to finally get our hands on some… so we could get it all over our hands.

Appearance 4/5
If we were talking about the packaging/presentation of this product, then we’d have to give it a five out of five. It comes in a solid glass jar with a wooden top. But the balm itself looks pretty ordinary, except for the green shade it’s been given to remind you that it’s been infused with cannabis.

Aroma 5/5
This balm was wonderfully aromatic. It smelled strong and sharp like a balm should, with that menthol crisp. But there were also tones of lavender underneath that, which gave both, the supply and the applied area, a fragrant but sweet scent that we absolutely loved. No hints of THC or dank flower whatsoever.

Touch 5/5
Since you don’t actually eat this guy (at least, we think you’re not supposed to), we going to reclassify this category as “Touch.”

This balm was surprisingly soft. We expected a firm texture that we would rub away. But instead, this was much softer (like a lotion), but still greasy (like a balm). That’s a long way of saying that it spreads fast. So applying any to an area of your body is going to coat your hands pretty thoroughly with the stuff.

Effect 5/5
Unfortunately for us (but fortunately for the purposes of this review), we fell into some back pain shortly after we purchased this balm, which gave us ample opportunity to test its effectiveness. And boy, were we pleased with the results.

The balm goes on with the same bright intensity that most balms do, but it doesn’t have a deep burn like IcyHot or Tiger Balm. Instead, it’s a cool feeling that’s both soothing and relaxing. After only a few minutes, our pain was markedly lessened, with movements and motion becoming easier and less painful. A light coat on another affected area only reinforced the fact that this balm did its job amazingly.

This Releaf Balm really hit the spot.  Strong and effective without burning the skin, this was an absolute lifesaver for us.  The balm smells great and goes on smooth, and the effects were fast-acting.  We felt pain relief and our skin was smooth, refreshed and relaxed.

While we have dreams of improvements for MedMen, their DTLA location is still a rocking great place. It’s got a fine selection of products, all laid out beautifully for you to see. Any questions can be directed to one of their (usually many) employees, but as anyone who ever walked onto a car dealership can tell you, they’re either on your a** or nowhere to be seen. Maybe one day, MedMen will take greater steps towards pairing you with your plants. But for now, the system is slightly flawed, but hey, it still works.

We smiled and nodded. Yep, it sure was.

This brief conversation took place while we were in line waiting to checkout at MedMen in DTLA. It wasn’t our first MedMen experience, but it was our first time at this location. It had everything we expected to find from a typical MedMen establishment -- minimalist design, interactive product displays, identically dressed employees, and a free-range approach to window shopping.

It’s true that all these things are symptomatic of an Apple Store, and that’s obviously by design. MedMen has even called itself an Apple Store equivalent, which means that this feeling isn’t just the result of coincidental design choices, but out of solid, strong branding.

But is this really the right approach to purchasing marijuana? It might be a slick and comforting retail environment, but computers and plant-based medicines are not the same thing. Apple Stores were designed to sell computers. Computers are manufactured machines under warranty that often require troubleshooting, help setting up, and a system in place for replacement of faulty equipment. None of that has anything to do with marijuana.

I might not know what strain of flower is best for me, and that answer requires a bit more nuance than, say, “Is that going to be enough storage space for me?” and things of this nature. I also might now know about the uses or benefits of certain products. And I may never, unless I do my own due diligence when browsing the MedMen selection. That might be fine if you miss out on a bluetooth speaker or some other piece of technology, but when it’s the difference between benefits of THC, the stakes are a little higher.

This is a long way of saying -- MedMen, you can do better. The Apple Store thing was a great hook to get people walking in the door, but your customer service and expertise shouldn’t stop at an iPad on a table. So, in my opinion, I say that you should push your Apple Store analogy even further and complete the tableau -- open up your own Genius Bar.

This could be a place where customers stop by to get an almost medical-style consultation about what they’re looking for with THC, as well as which products would be best for them. It could be by appointment, or on a walk-in basis. You’ve got the knowledge and the products, now it’s all about pairing the right person with the right product. If you can do that, you’ll have taken the Apple Store model and totally surpassed it. Beaten it at its own game, so to speak.