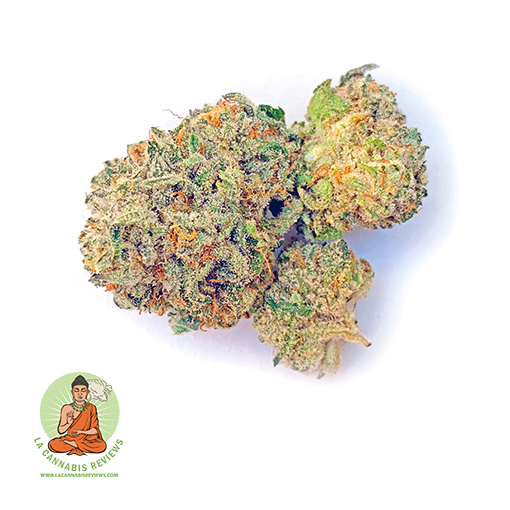 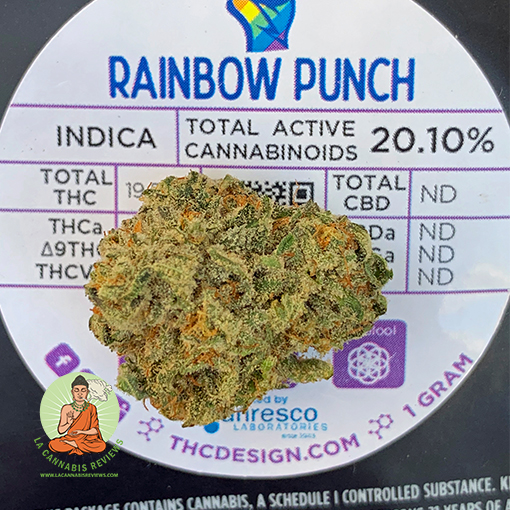 What if, instead of finding gold at the end of a rainbow, you found a nice crop of sweet, sweet Indica flower? Sounds like “gold” to me.

This Indica strain comes to us via, THC Design. Packed inside a vacuum-sealed bag (with a pop top container on the inside) there is little information about it, except the basics -- name, strain type, and a bunch of numbers about potency and THC percentages. Do these numbers mean anything to us? Not really, but maybe they will after we smoke it.

Appearance 3/5
Despite the name, this Indica flower does not possess any full technicolor glory. Instead, this plant is actually a little light on color. The leaves carry a medium shade of green that skews darker on the outer edges, with small pockets of orange nestled in between the bigger leaves.

What this flower does have is a lot of crystals. There are a ton of crystal deposits in every nook and cranny of this flower, making it very dusty and white. While that does possibly mean good things are to come, we were a bit disappointed that this didn’t rock more color up front.

Aroma 5/5
If we were less than impressed with the look, we were knocked out by the aroma coming off of this flower. It’s got a warmth and sweetness to it that we’re not used to with marijuana. It’s got hints of caramel and coconut wrapped together, almost like this is the weed version of a Caramel Delight. And we’re hoping it gets us “baked” - that’s for sure.

Taste 3/5
Despite the great smells that we were getting from this flower, none of that translated into an exciting or interesting taste. In fact, we noted the absence of taste when we smoked this strain. The primary taste on our tongue when we took an inhale was mostly burning, with a light, hollow aftertaste that lingered on our taste buds long after. It wasn’t bad, but it did nothing to make us excited about smoking this flower.

Effect 4/5
So far, this Rainbow was less of “an arch” and more of a “roller coaster.” When we actually lit up and smoked a bowl, we didn’t know what to expect. And what finally happened was… we got stoned. Which was good, but it wasn’t great.

This is a medium strength Indica; a slow-burn high that never gets you too buzzed or buried in your couch. You’ll feel stoned, but never enough to get lost in time or thought. If anything, this is a great strain for someone what wants the Indica high, but isn’t ready to get obliterated. It will help quiet a restless mind, tune out distractions, and even jumpstart your appetite. Also, it should be noted that we got ravenously hungry on this strain, so enjoy this one with dinner plans already set.

THC Design’s Rainbow Punch turned out to be a good, lightweight Indica.  It provides a solid high that never overwhelms the user, and won’t induce paranoia or tunnel vision.  Pair it with an activity, or a day when you need to be functional but needing to take the edge off.

MedMen DTLA is a solid dispensary in a historic part of town.  While we normally might say something like -- “Next time you find yourself in DTLA’s Broadway District, stop in at..” -- but let’s be honest, what we should say is -- “Hit up MedMen DTLA, then stick around and take a walking tour of some honest-to-goodness Los Angeles history.”

One of the coolest, most forgotten parts, of Los Angeles history is the Broadway District. The Broadway of Downtown Los Angeles was the first (and largest) collection of movie theater palaces in the United States. Most of them are still standing today. Giant, art-deco styled theaters, with grand marquees and wonderfully opulent designs. They open (sometimes) as venues, but mostly remain under private ownership as filming locations. You might want to pay them a visit, especially if you’re headed to one of Broadway’s newer tennants -- MedMen - DTLA.

Located in a building with a giant theater-style marquee hanging above the front entrance, the shop fits in with the rest of the street, but don’t worry, it won’t be easy to miss (there’s a giant red and white MedMen sign hanging on the marquee).

If you’ve been to a MedMen location before, then you know what to expect.

Most folks call it the “Apple Store for Weed,” but we prefer to think of it as the “McDonald’s for Marijuana” -- cribbing from their famous philosophy of brand consistency over multiple locations. Having said that, the thing we love about visiting different MedMen locations is how they manage to distinguish themselves with varying details and design. And housing yourself in what potentially was an old movie theater -- well, that’s distinguished, baby.

After checking-in out front, you’ll be led into the long, narrow establishment. What you’ll see immediately upon entering are product display tables. Each broken down by product type (flower, edibles, wax, vapes, etc). You’ll see their selection laid out (without packaging) kept inside small display jars, with magnifying windows and smell flaps. In the middle of each table is an iPad that can be used to access any more relevant information about the products on display. Pretty standard stuff, but the presentation this time is what counts -- instead of the stark white aesthetic, this MedMen location is bathed in dark, deep wood grain.

If you look along the wall, you’ll find more products that don’t fit the display table mode, including lots of topicals and CBD products. (Please note: while some other MedMen stores we’ve visited had a 50% off table, this location currently does not.) Finally, at the back of the store, you’ll find the registers where you can make a purchase, check-in with a budtender, or pick up your online order.

Another great thing about MedMen -- you can order online. Their website provides a store-specific inventory and confirmation emails for when your order has been placed, along with when it’s ready to be picked up.

(Another note: MedMen will only hold your items for that day only.)