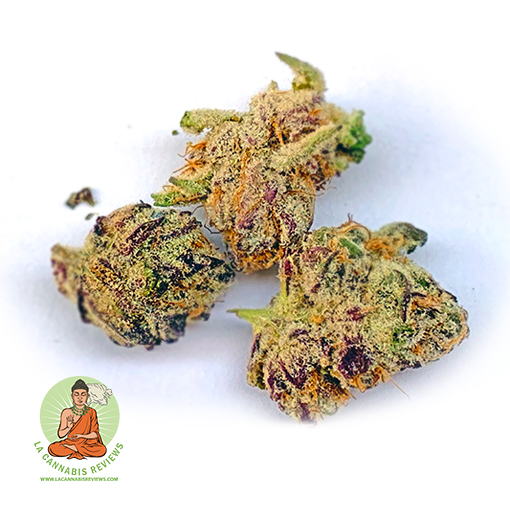 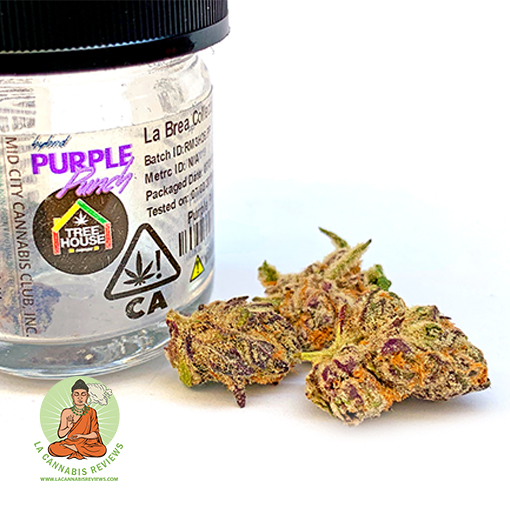 Appearance
Green shade that was barely visible underneath the fuzzy deposits of crystals 100%
Aroma
. It was both sweet and citrusy 100%
Taste
My throat became very irritated and raw 60%
Effect
It was a heady, buzzy feeling 60%

When it comes to marijuana, purple is almost always a good thing. I love any strain that flashes some purple on its leaves. It usually means I’m in for a very tasty treat. That’s why I snatched up this Purple Punch strain as fast as I could.

Appearance 5/5
If the strain has purple in its name, it better have purple on its leaves. I feel like that’s a simple request, and this strain came through for me in spades.

The pods of this plant were covered with so much “fuzz,” I thought I was about to be arrested. The outermost leaves, themselves, took on that so-dark-green-they’re-purple color that I absolutely love. There was also a medium green shade that was barely visible underneath the fuzzy deposits of crystals that found themselves in between.

Aroma 5/5
Anyone expecting this flower to smell like grapes will be a bit disappointed. In fact, the aroma of this plant reminded me of orange juice, as strange as that may sound. It was both sweet and citrusy. This odor was cool and frosty, as I took a whiff. While not a very fragrant flower, it does excite and appetize me enough to want to smoke it.

Taste 3/5
This smoke provides a big kick, but in a bad way. The inhale doesn’t taste like much, with a hint of green underneath the heat. And the exhale scratched up my throat like an angry cat. As I smoked on, the feeling only got worse -- my throat became very irritated and raw. It wasn’t enough to make me stop smoking it, of course, but it was enough for me to get annoyed.

Effect 3/5
If this flower was going to make me feel so unpleasant with its taste, then I hoped that the effect would be worth it. However, it was not.

This Indica strain produces a middle-of-the-road high that makes you feel stoned, but doesn’t make you feel much else. The feeling was heavily concentrated in the brain. It was a heady, buzzy feeling -- Indica typical -- but it didn’t spread anywhere else or relax the body, at all. It was all in my head, and after a while I started to feel worn down by the feeling.

Seeing as how I was comparing this high to a headache, it’s probably not a good sign.

I was a bit disappointed by this strain of Purple Punch. For me, it was not the good-time, chill-out Indica that I was hoping for. It produced a very heavy feeling with a head buzz that weighed me down until I eventually wanted to sleep.

In that respect, I do think that anyone with sleep issues should look up this strain. Or possibly anyone who needs help slowing their brain down. For that, this strain might be the way to go.

Discovering LBC was a total clutch move. With the proliferation of dispensaries in Mid-City, this one stands out as one of the best. Next time you’re in the area and looking to get smoked out, definitely hit up this spot.

The Mid-City neighborhood of Los Angeles has been experiencing a renaissance in the past few years. As gentrification starts to take hold -- and their many late night taco trucks become busier and busier -- the cannabis industry is ahead of the curve with a firm foothold in the area. Boasting a handful of shops all within a few miles radius, that means you (as the consumer) have the power to vote with your dollar, so to speak. Your support could be the difference between helping establish a dispensary as a neighborhood staple, or banishing it to obscurity - as the waves of change come crashing down.

To that note, I’d like to recommend a spot that I hope sticks around for a very long time -- the La Brea Collective. More affectionately known as, LBC.

This place is definitely one of the most impressive shops in the area. It even has parking! Although, there are only a few limited spots on the side of the building. I found one easily and walked around to the front door, where the Security Guard seated outside waved me in.

Just inside the door, I found another Security Guard ready to check me in. As I entered the showroom, I passed through a full-on metal detector. Too much security anywhere makes me a little nervous, especially at a dispensary. But don’t let these things dissuade you -- it’s totally worth pushing through to get inside.

The showroom itself is ginormous! A huge space with the products to the right, a wall of art on the left, and a big line set up in the middle of the floor. Even though this shop is designed to handle a huge number of customers, I dropped by at a very chill moment, and was the only person in line behind the customer currently being assisted by the budtender. It was a short wait, but it gave me time to browse their product selection, which looked fantastic.

The display case is a custom design -- made of stained wood and big glass panels. Products are laid out in decorative ways, and they’ve spread their selection out so you’ll want to look over the entire case to see their full inventory of flowers, edibles, waxes and CBDs. There’s more stuff hanging on the back wall, as well -- mostly vape cartridges and disposables, along with a tall bookshelf that houses the majority of their pre-rolled joints.

But the flower is what they put front and center. The big digital display behind the counter gives you the pricing per quantity (please note that most plants come in 8ths, and anything less than that is in limited supply), and the budtender allows you to look at any jars you’re interested in. I saw a lot of great looking flower here, and the budtender was very easily able to let me know, in real time, what was in stock and what was out.

Of all the great things that I saw, there was this strain of Purple Punch that looked too good to pass up.