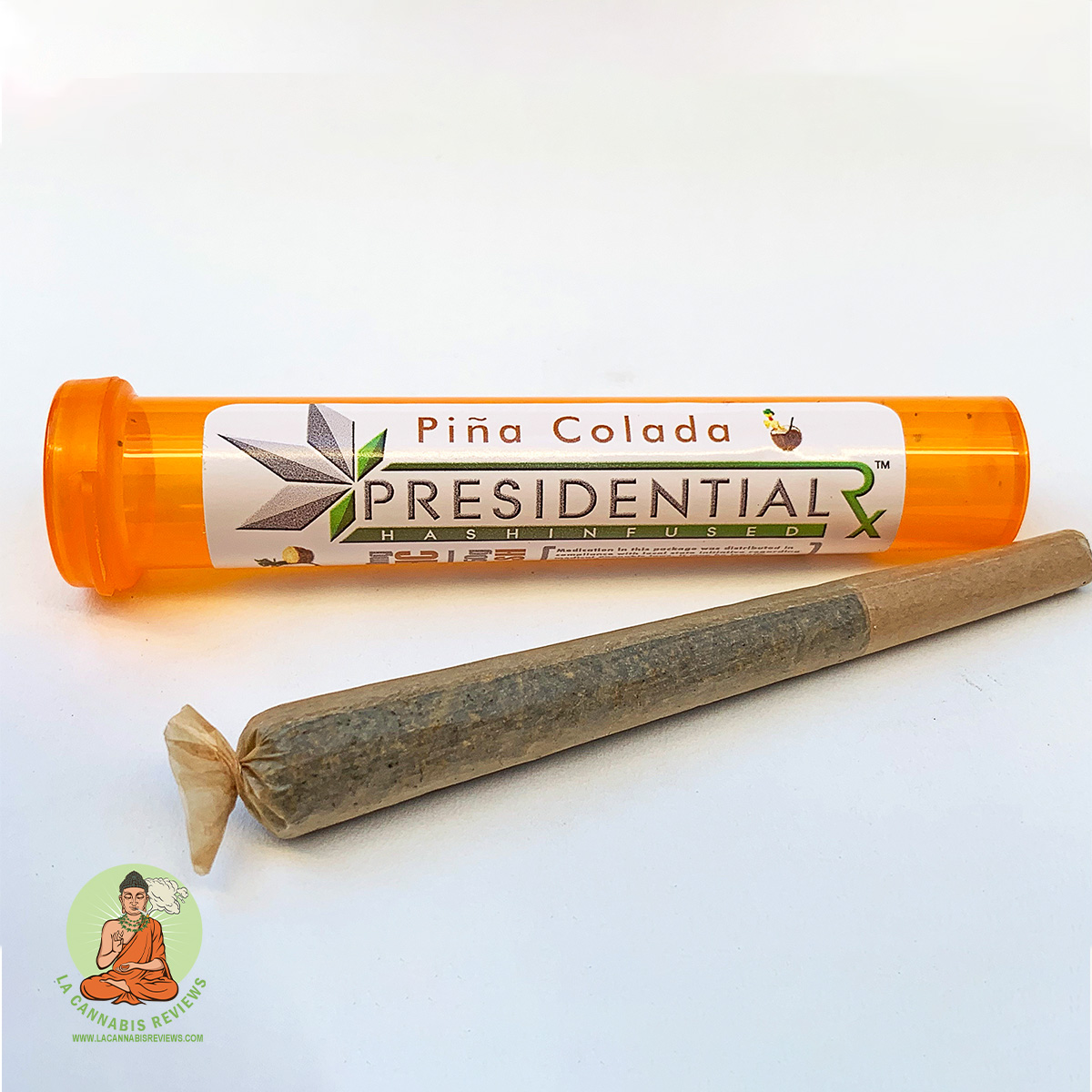 Presidential Rx Pre-Roll Joint (Pina Colada)
These came recommended to us by our budtender. We were looking for a good pre-roll joint, and they said this was the one they enjoyed the most. This cone is packed with flower that’s been infused with a half-gram of hash. And TreeTop LA offers these things at a sweetheart deal -- one for $18, two for $25.

Appearance: 4/5
It sure didn’t look like much when we took it out of the tube. You could call this a model of simplicity. It was a well-packed and evenly rolled cone, with a short “firestarter” twisted on the front. You could see the shallow outline of flower beneath the paper, but that’s it. No hints of hash. That makes this joint a bit of a sleeper. But we’re hoping it doesn’t put us to sleep.

Aroma: 4/5
Considering we chose Pina Colada flavor, we were going to be disappointed if this thing didn’t smell like a tiki drink. And we were not disappointed -- this twist had a sweet, subtle odor to it. To us, it smelled like mango candy. It was tangy and tropical, but it also had that hint of artificial sweetness to it.

Taste: 3/5
Whoo-boy. This joint had us coughing up smoke like a chimney. From our first hit, this pre-roll produced a big smoke that was very harsh and hot. We started coughing immediately, and kept it up as the rest of the joint burned down. We’re normally not like that -- this isn’t our first rodeo -- and to our credit, the experienced smokers were shared this twist with were coughing too, so we didn’t feel too bad about the whole thing.

When we were hacking up a lung, we noticed that there was a nice hint of mango candy flavor. It was surprisingly pronounced and not too sweet, which was nice. Too bad we couldn’t have enjoyed it a bit more. You know, because of all the coughing and whatnot.

Effect: 4/5
Well, this joint certainly did its job. The hash-infused power packs a strong punch, and not just to your lungs. A joint like this is only going to lean one way or another. And this one was leaning towards a heavy Indica high. We felt very buzzed in our brains, with almost that fried egg feeling of being too blessed out. Everything slowed down, but mostly in our bodies. We became sedentary, and focused on the task at hand. We became so engrossed in its effects that we would look to the clock and be amazed at how much time had actually passed.

Thankfully, this joint wasn’t too strong to induce sleep. That simply would have been a waste.

This Presidential Rx pre-roll was hash-infused for maximum kick. And it kicked us pretty hard, which got us really high, so… everything went sort of according to plan.

We ultimately do recommend this joint, but we also suggest that you use caution while smoking it.

Let’s keep it simple -- TreeTop LA is a great dispensary. They carry great flower (plus other stuff) that’s super affordable. Their employees create a chill vibe that allows you to get the most out of, not only your dollar, but your time inside the shop, as well. Go check this place out. You won’t regret it.

Let’s be honest -- when it comes to finding a great marijuana dispensary, we’re all just looking for a good deal. Who’s got the best bud at the lowest price? In today’s burgeoning marijuana market, that question is becoming increasingly difficult to answer.

In LA today, there are three things you have to ask yourself about a dispensary -- Is it cheap? Is it cool? And, most importantly, is it legal?

Most shops can only answer yes to two of those three. If your spot is really cool and really cheap, then it’s probably an illegal operation. If you shop somewhere that’s really cool and legal, then it isn’t cheap, because it’s ponying up all the proper sales tax. And if you somehow manage to find a shop that’s both cheap and somehow legal, then it’s not going to be cool, because everybody is going to be going there. These places are like going to the DMV of weed -- DMWeed, if you will.

But sometimes, and only sometimes, in this cruel, cruel world, you can find a place that magically checks all three of those boxes. And one of those magical places is called, TreeTop LA.

We know what you’re going to say: Is it chill?

Yes. This place is totally chill. Everyone who works here - from the check-in counter, to the budtender, to the Security - was friendly and seemed happy to be there. Even though we dropped by at a busy time, we were treated to a one-on-one experience by our budtender, who had all the answers and tons of recommendations.

Yep. It’s a legal spot. It may look like it’s not -- occupying a brick warehouse space off San Fernando Road and sporting a large, heavy black metal door -- but we assure you, everything about this place is legit. The inside reminds us of the outlaw days when there were pretty much only illegal dope holes scattered around the city, but that’s only for show. Plus, there are enough real deal amenities -- a water cooler, an ATM, product displays -- that makes it feel like an authentic establishment.

So, what? Is it expensive?

That’s the best, most amazing part. This shop carries tons of products -- flower, edibles, waxes, vapes, CBD -- and all of them are reasonably priced. They’ve also got deals for each day of the week, and distribute Loyalty Cards to patients that can be punched with each purchase. Not only that, but we arrived during one of their Happy Hours, which meant they didn’t charge any tax on us.

Affordable, chill, and legal? That’s not a dispensary, that’s a unicorn.

You got that right!