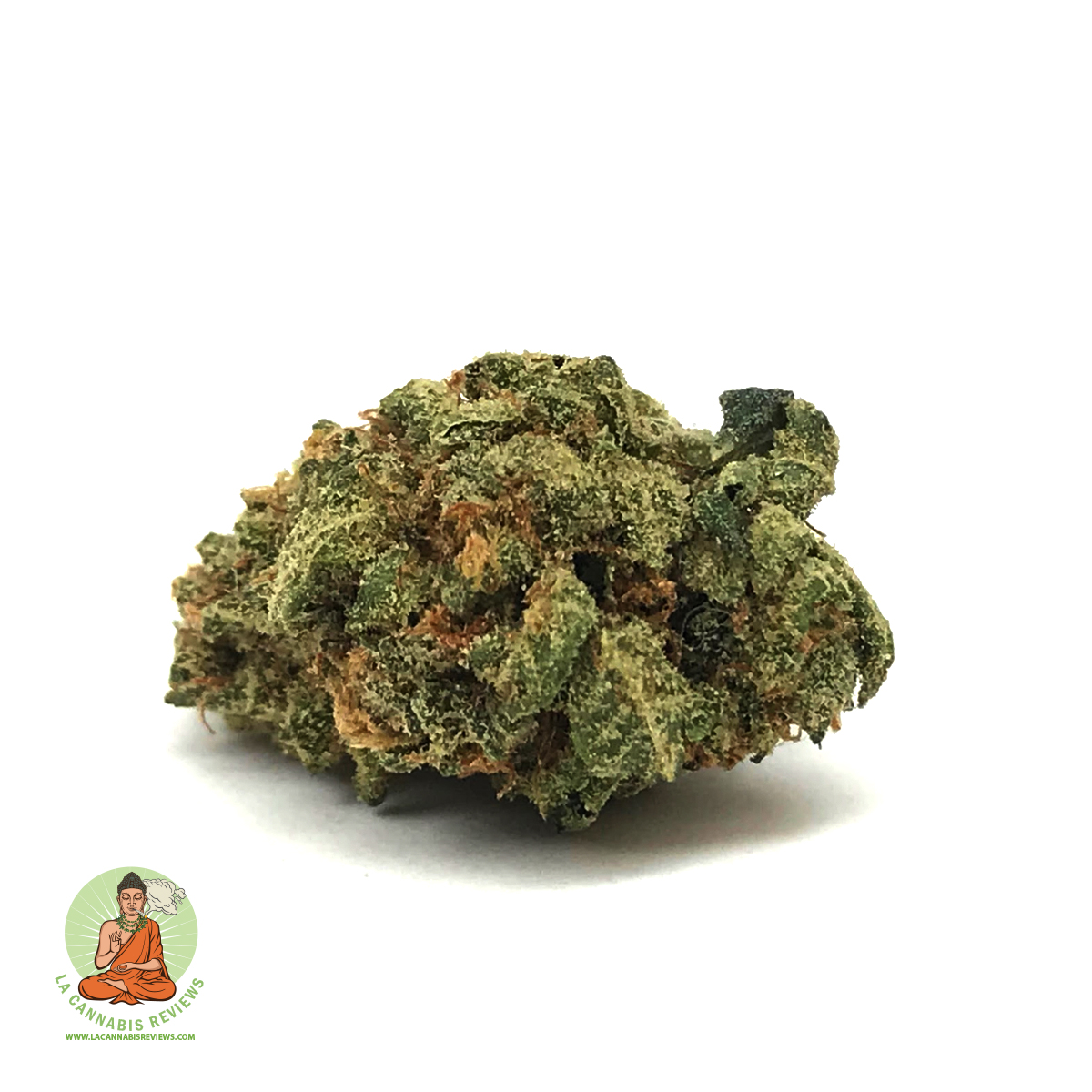 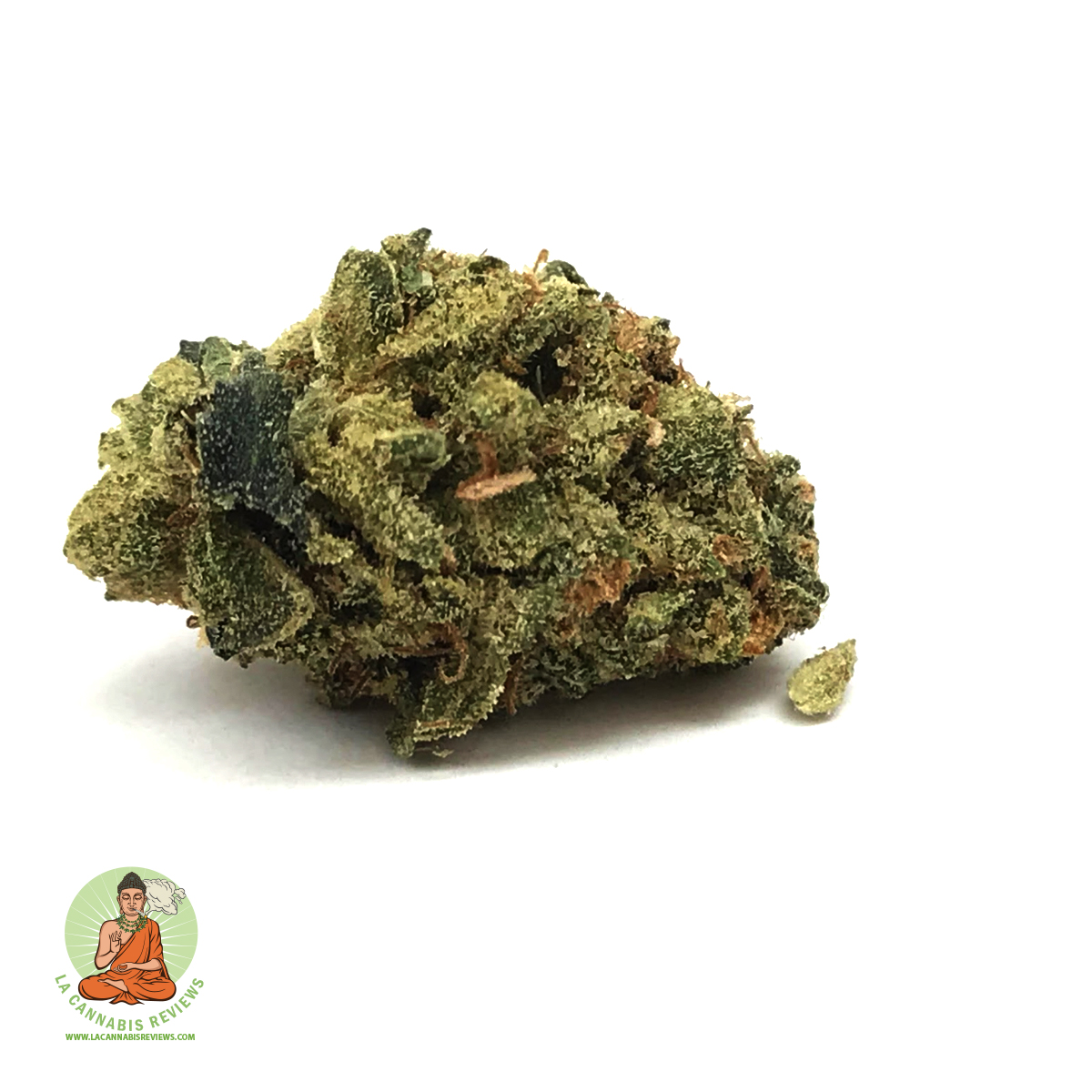 Appearance: 5/5
First off, let’s admire how beautiful this bud looks. It has a rich green color, with lots of orange spots, combined with shiny crystals all over the leaf. If there were awards for best-looking bud (which we think that there are), then this would definitely be a first place, blue ribbon winner, in our eyes.

Aroma: 3/5
With a name like Gorilla Cookies, you’d assume this strain would fill up a room with its scent profile. Unfortunately, that was not the case with this bud. Which is fine, we don’t need to be blown away by a strain’s smell, but it would’ve been nice to inhale a bit stronger of an odor, to be honest.

Flavor: 4/5
This cookie carries a mild flavor. It was a sweet, slightly spicy taste. There was no coughing fits or throat-clearing moments, which is always nice. And the overall flavor was enjoyable. No complaints here.

Effect: 4/5
This was our hybrid choice, and unfortunately, it was the least impressive of the bunch. Not to say that it wasn’t great bud, it just lacked the powerful punch of other strains that we’ve picked up from Korea Town Budz. Instead of a Gorilla, this strain came on like a softer and sweeter animal, kind of like a capuchin monkey. Think “Marcel” - the pet monkey that Ross had on Friends.

That’s a good thing though, since this less aggressive bud has a surprisingly long-lasting effect that you won’t mind hanging out with for a while.

While we were not initially taken aback by the first hit effects, we were surprised by how long-lasting this buzz wound up being. Our taste test turned from a light high to something heavier. So much so, that we were questioning whether or not this hybrid was actually a mislabeled Indica.

Not only that, but the body buzz that came along with it created a nice, tactile feeling in our fingertips. Like one of those stereotypical acid trippers in bad movies, we were running our hands all over everything just for the feeling of it.

While this strain might not come on strong like King Kong, it’s an enjoyable daily companion that winds up feeling very Indica dominant.

Consider this cookie best for late nights, early evenings, or anytime you want to kick back on the couch and not move for a little while. Be sure to curl up with your favorite fuzzy blanket, too. You won’t regret it.

Boy oh boy, did this place make us feel like a kid in a candy store. The showroom features glass cases fully stocked with pre-rolls, mostly Golani, with all the colors of the rainbow. That, combined with the colorful Hubby Bar edibles that they have laid out neatly, this was like something a stoner Willy Wonka would go crazy for.

Customers enter one at a time, which means shopping feels more like a personal experience when it comes time to meet and greet your budtender. We were shopping around, and they showed off a lot of their plants. All of which are displayed in tall glass jars, with strains and prices printed on the side. Some of them were halfway gone, or even less! But they had plenty of other options to get us excited.

With the help of our crazy kind budtender, it only took a couple minutes for us to land on a certain strain of flower that we had never heard of before. Typically, when we see a unique sounding strain, we jump on it immediately. And this, my friends, was no different.