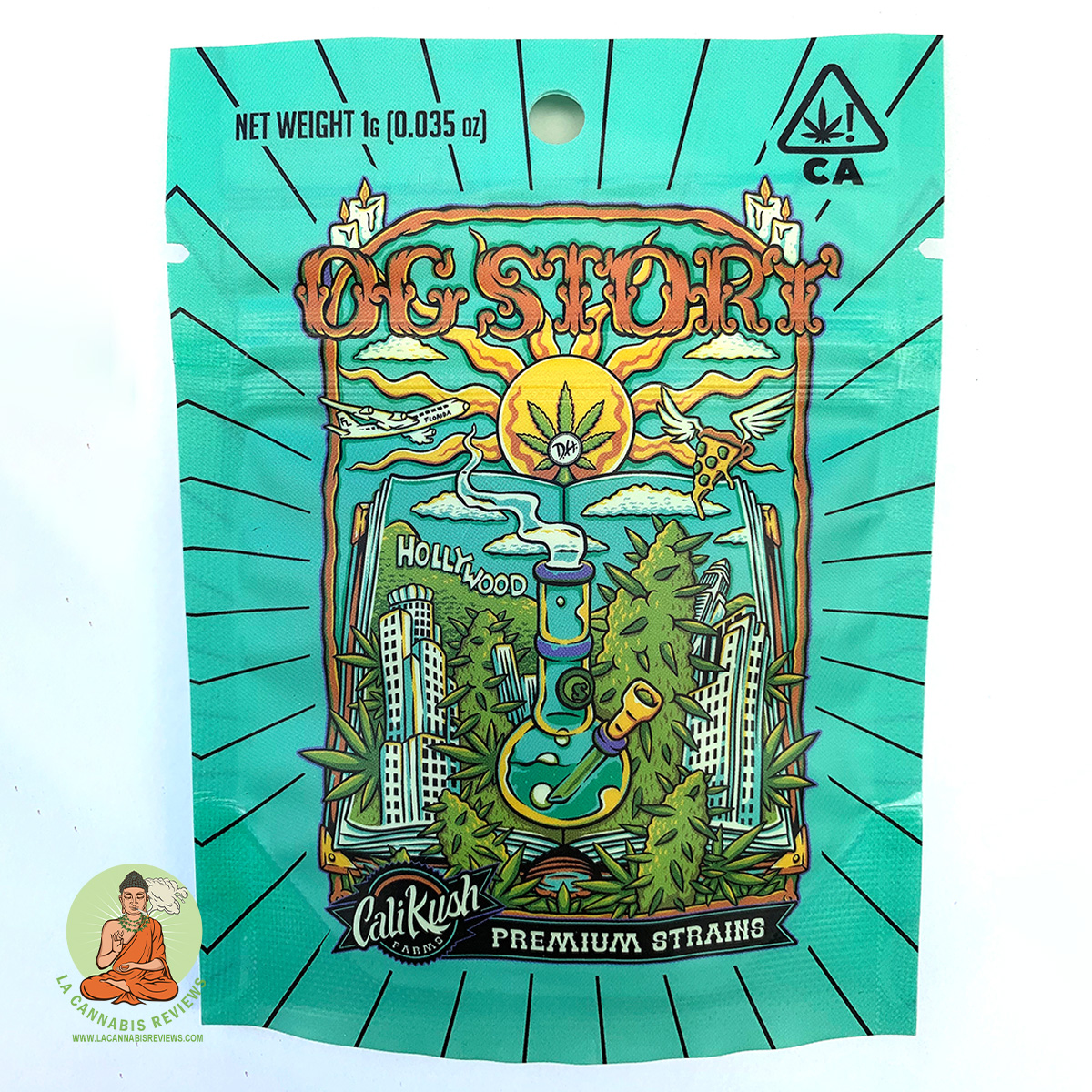 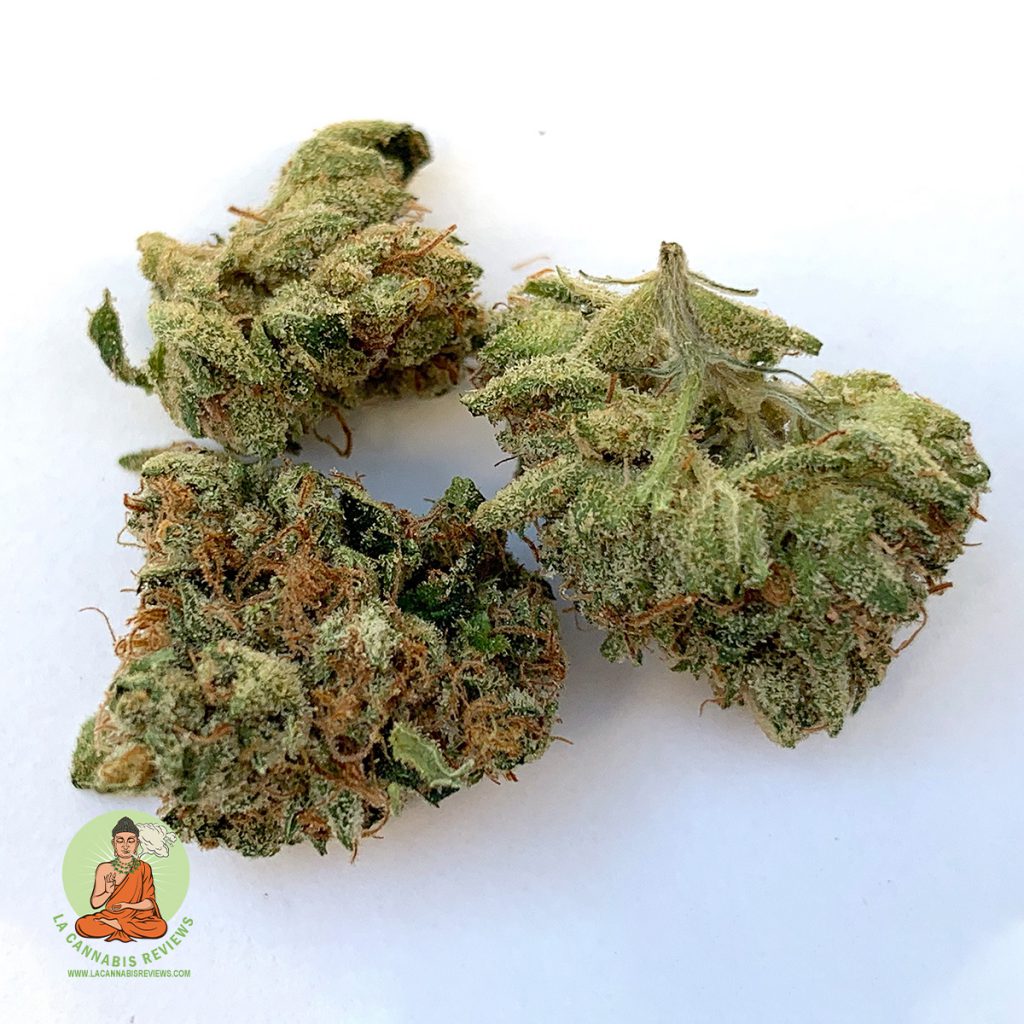 OG Story (Indica)
I’m usually not a fan of plant packaged in vacuum-sealed bags, but this Indica strain from Cali Kush Farms came with a super cool piece of art emblazoned on the bag. A painting of a bong set against the city of Hollywood that’s (literally) overgrown with green. It’s the kind of package that I love to see. It’s unique, interesting, and really cool to look at. It also makes me want to look up other strains from Cali Kush to see if they have the same art.

Did I mention I’m a sucker for advertising and collectables? If you’re like me, then this OG Story will satisfy you in more ways than one.

Appearance: 4/5
This flower came to me as a bunch of small, cloud-shaped pods. They were fluffy to the touch and very tough to break apart. The leaves, themselves, were mostly a dark green, and the undersides colored a lighter shade, with only a few orange tendrils popping up here and there. You’ll have to take a very close look to spot the light dusting of crystals on the plant, which are mostly tucked away in the nooks and crannies.

Aroma: 5/5
I thought this flower had a very fresh look, but it has an even fresher smell. The odor off this plant is very green, earthy, and mossy. Like it had been delivered straight from the field only a short time ago. There’s even a faint sweetness to the smell, but that might just be my brain throwing that in there because I love it so much.

Taste: 5/5
Smoking this flower was a wonderfully smooth experience. The smoke had a medium flavor that wasn’t too heavy, or too strong. It was very easy to puff on, and I detected a sweet and earthy aftertaste after I exhaled. There was even a slight popping of sweetness and spice on the tongue that reminded me of drinking an IPA.

Effect: 5/5
Wonderful. This Indica high is intense without being overwhelming. It’s a strong hit of focus, intensity, and energy. I felt a nice head buzz, as well as an electric feeling in the muscles that extended all the way from my spine to my fingertips. Unusual for an Indica, but very welcome.

This OG Story strain was a delightful treat. It’s a strong Indica that delivers some Sativa style body buzz to compliment the focus and energy of the Indica high. I think this would be perfect to smoke before a trip to the gym, or anything physical. It really makes you want to get up and go.

I ignored this amazing dispensary for way too long because of my own misconceptions. All I saw was the rush hour traffic on the street, and not one of the best weed spots in the city. That was my mistake, and I won’t make it again. I hope you learn from my error, and check out The Kind Center. Don’t let the traffic fool you, this spot is worth the effort.

Location is everything. And I can’t help but wonder if the location was what kept me from visiting The Kind Center before. It’s not that it’s terribly inconvenient, it’s that I always perceived that it was.

After all, this dispensary is located on the north end of Cahuenga Blvd in Hollywood, just before the road turns into a straight shot into the The Valley. While not a scary neighborhood, per se, the traffic is what scared me the most. It’s a bumper-to-bumper roadblock during Rush Hour, which is an extended five to six hour ordeal in Los Angeles, but especially in central Hollywood. I usually avoid that part of town at all costs, but unfortunately that means I’ve unintentionally steered clear of this spot for way too long.

Making my visit before lunchtime, I found the traffic to be virtually non-existent. Not only that, but I discovered that this shop has its own parking lot in the back. That’s clutch for the area, and would definitely make me reconsider stopping by during busier hours.

I stepped inside the cool, air conditioned waiting room. You’ll find it beautifully furnished with wood grain, and decorated with furniture that looks like its been cut from tree logs. I got a definite doctor’s office vibe, as I checked in with the employee behind the glass.

Inside the showroom, I found the room covered in that same light brown wood grain, and I was amazed by the gigantic, custom-made wood and glass display case. Not only was it impressively built, but it was stuffed with tons of great-looking products. I saw that they had something for everything -- flowers, edibles, waxes, topicals, vapes, disposables, pre-rolls, even a big ol’ drink cooler.

My budtender greeted me, and asked what I was interested in. That day, it was flower, and they showed me their selection. This shop mostly deals in eighths, but they have grams available, sometimes. I asked if they had any grams, and they literally only had one left -- a vacuum-pouch stuffed with some OG Story.

Only one gram left? It was meant to be!