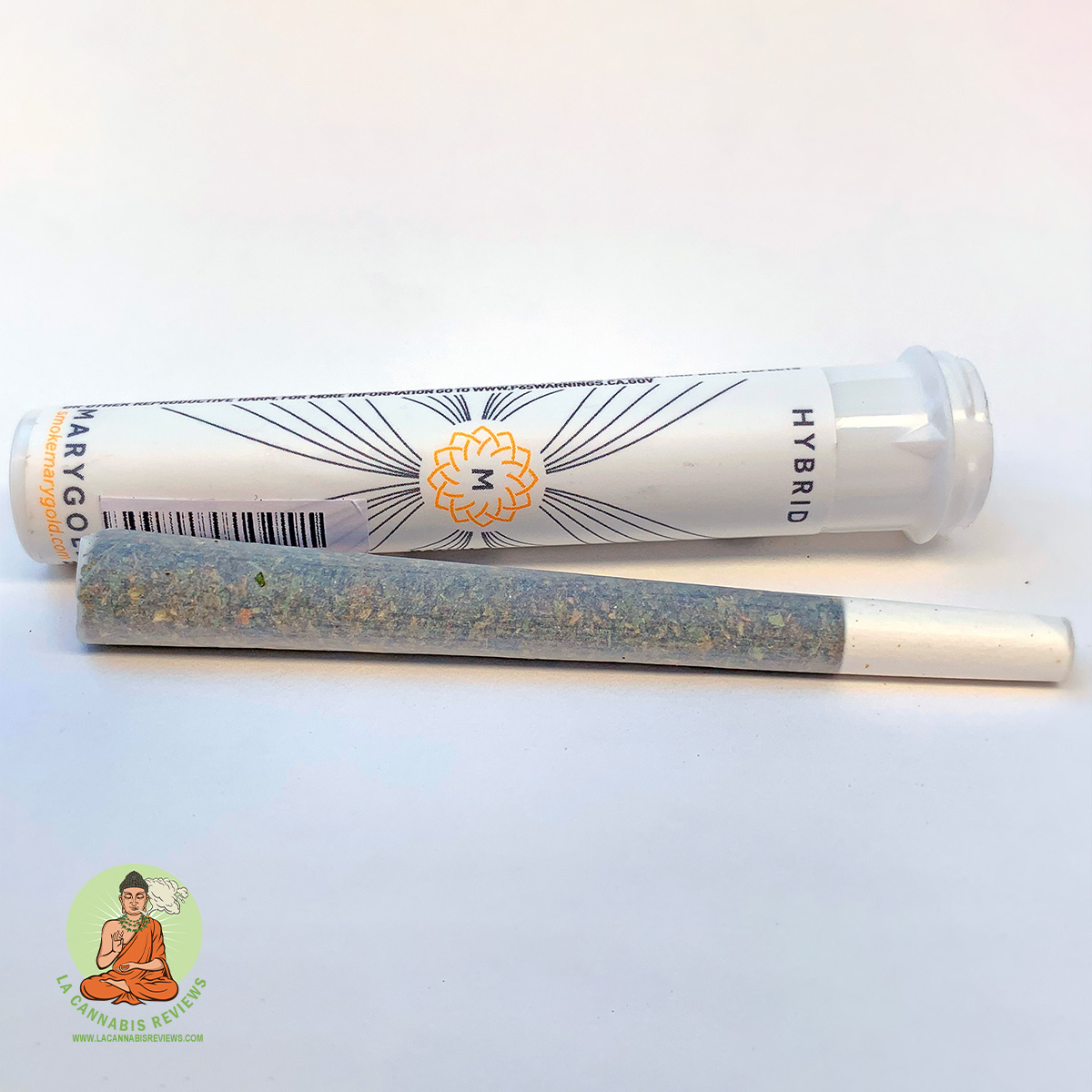 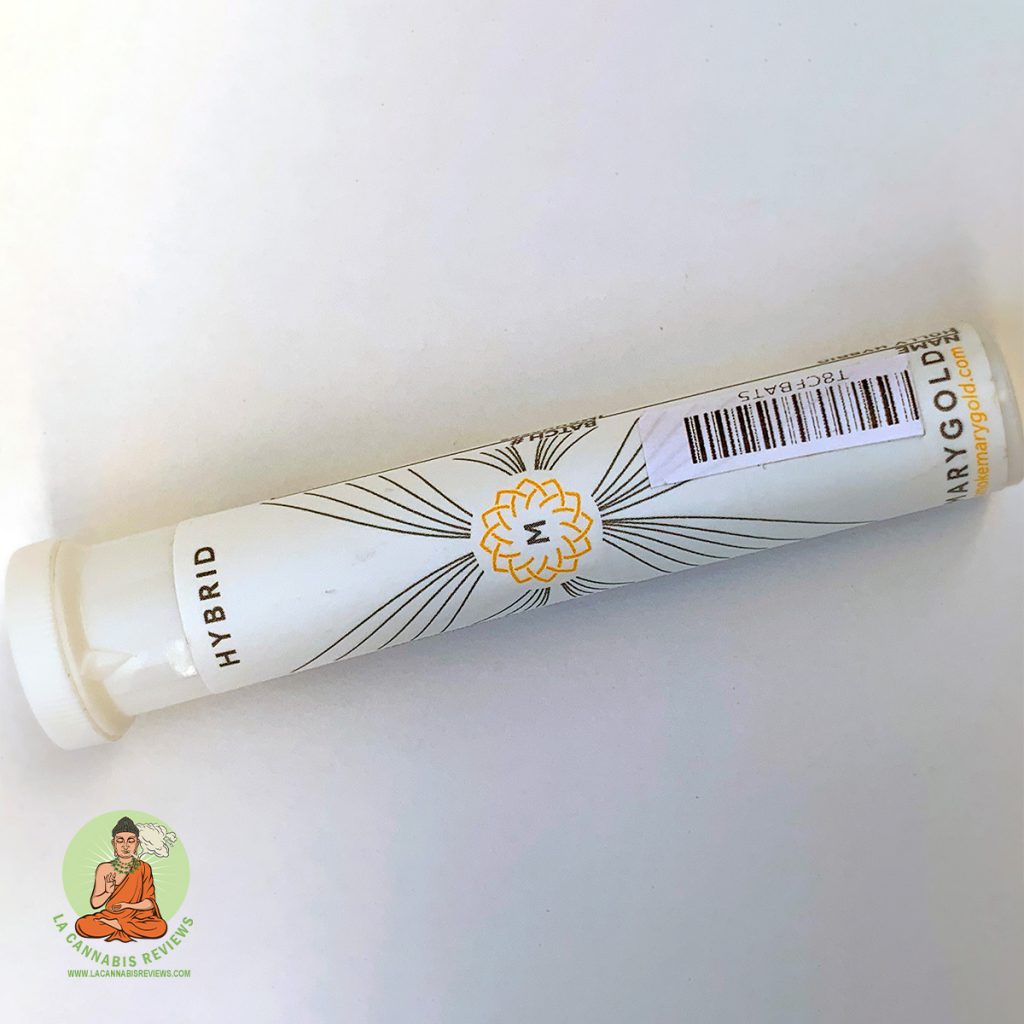 Appearance
The joint is wrapped with a white paper cone 60%
Aroma
no aroma to be detected at all 60%
Taste
very bitter, dry smoke 60%
Effect
Everything slowed down as soon as I started puffing 100%

Marygold Joint (Hybrid)
According to the label, this cone is packed with 0.8 grams of flower named: Holly Hybrid. Pleasure to meet you, Ms. Hybrid of Marygold. Let’s see what you’ve got.

Appearance: 3/5
As far as looks go, they can be deceiving. The joint is wrapped with a white paper cone and folded down at the end, instead of a twist. Cute, but would it burn evenly?

The answer is: no. The joint went limp as soon as it was lit, revealing empty spaces inside, and it started to canoe immediately. Not a great performance, Ms. Hybrid.

Aroma: 3/5
What about the smell test?

I can’t say it passes or fails this test, because there was no aroma to be detected at all. I couldn’t smell anything but the paper when I put my nose to this joint. No matter how hard I tried, all of its pleasures and secrets had been folded away. Too bad.

Taste: 3/5
Another poor mark on this report card. As soon as I lit the joint, I took a giant puff of very bitter, dry smoke. The flower tasted very stale, and a lot like cardboard. It did not taste great, and the only saving grace of the joint was that it burned for a very long time. Which drew out my displeasure, but also made my joint last longer. It was all very… confusing.

I felt like I had all the time in the world, and it left me feeling happy and calm. This Hybrid satisfied both of my Indica and Sativa cravings, but also delivered something so strong and unique that I had a hard time classifying it. It was a very subtle feeling that stayed in the background -- like music playing from your neighbor’s stereo - but it’s so good that you can’t help but dance to it anyway.

After careful consideration of the test results, I find that Ms. Holly Hybrid passed the exam with flying colors. I might even say, high flying colors. This strain of Hybrid weed was fantastic, even if it was rolled into a less-than-desirable joint. But whatever qualms I had with the delivery system, Ms. Hybrid certainly got the job done.

While the retail experience at The Kind Center was a bit dodgy, the results cannot be argued. Turns out that budtender knew what they were doing after all. This won’t turn me off from going to The Kind Center again, but next time, I’m not making sure that I’m getting all the possibilities up front. Also, I’m buying another Marygold joint.

There’s a phenomenon I’ve noticed as I go out shopping at dispensaries. It’s not a marijuana exclusive practice, but it does happen often. We’ll call it, “the selective show.”

The selective show is when you, the customer, enter a dispensary and ask to see a certain type of product. Let’s use my latest trip as an example. I made my way to The Kind Center the other day, seeking refuge from the heat (and relief from my sobriety). I entered the treehouse -- er, excuse me, the showroom -- and was greeted by a friendly budtender. He peered out at me from behind the large, fully-stocked display case and asked what I was looking for.

I told him that I wanted some pre-rolled joints, if they had any.

He said, “of course we do.” And then he showed me some joints. He grabbed them very quickly, pulling them from a display that was no longer than an arm’s length away.

If you have not been to The Kind Center yet, you should. But you must understand that this showroom has products everywhere. Not only behind the glass of the display case, but also hanging on the back wall, stocked on shelves behind the counter, and even inside the large cooler next to the register. So for the budtender to pull these joints from this giant inventory so quickly and easily…it felt like a magic trick.

He showed me some good looking joints from brands I had heard of before -- Canndescent, Cali Kush, etc. There were also others that were new to me, like Marygold.

I chose the Marygold joint because it looked to be the best of all the options presented (and because I like to try new things). With my selection made, I was guided over to the cash register where the budtender started to ring me up.

As I waited to pay, I saw something on another shelf stocked with more pre-rolled joints. Not like a couple more, a lot more. And different varieties, too. Different brand names -- like Lift Tickets and Three Kings -- stuff that I hadn’t noticed before.

I had to ask. “What are those over there? More pre-rolls?”

“Yep.” The budtender said, not slowing down the transaction.

That’s when I realized I had been victims of the “selective show.”

Now, it’s dangerous to presume that those joints would be somehow better, or more satisfying, than the purchase I made, but it is annoying to ask to see something for purchase only to realize later that you didn’t get the full array of options.

It’s also dangerous to assume that this budtender had any ulterior motive for this move. Perhaps they didn’t like those joints, and didn’t want to personally recommend them. Maybe they forgot they were there in the first place, but that solution provides little relief. All I can say is that I wished I had known about all the joints. That’s all I want. I wanted to know about all the joints.

Show me something new, and I might give you all of my money. Show me only half the supply and you just lost half your opportunity.