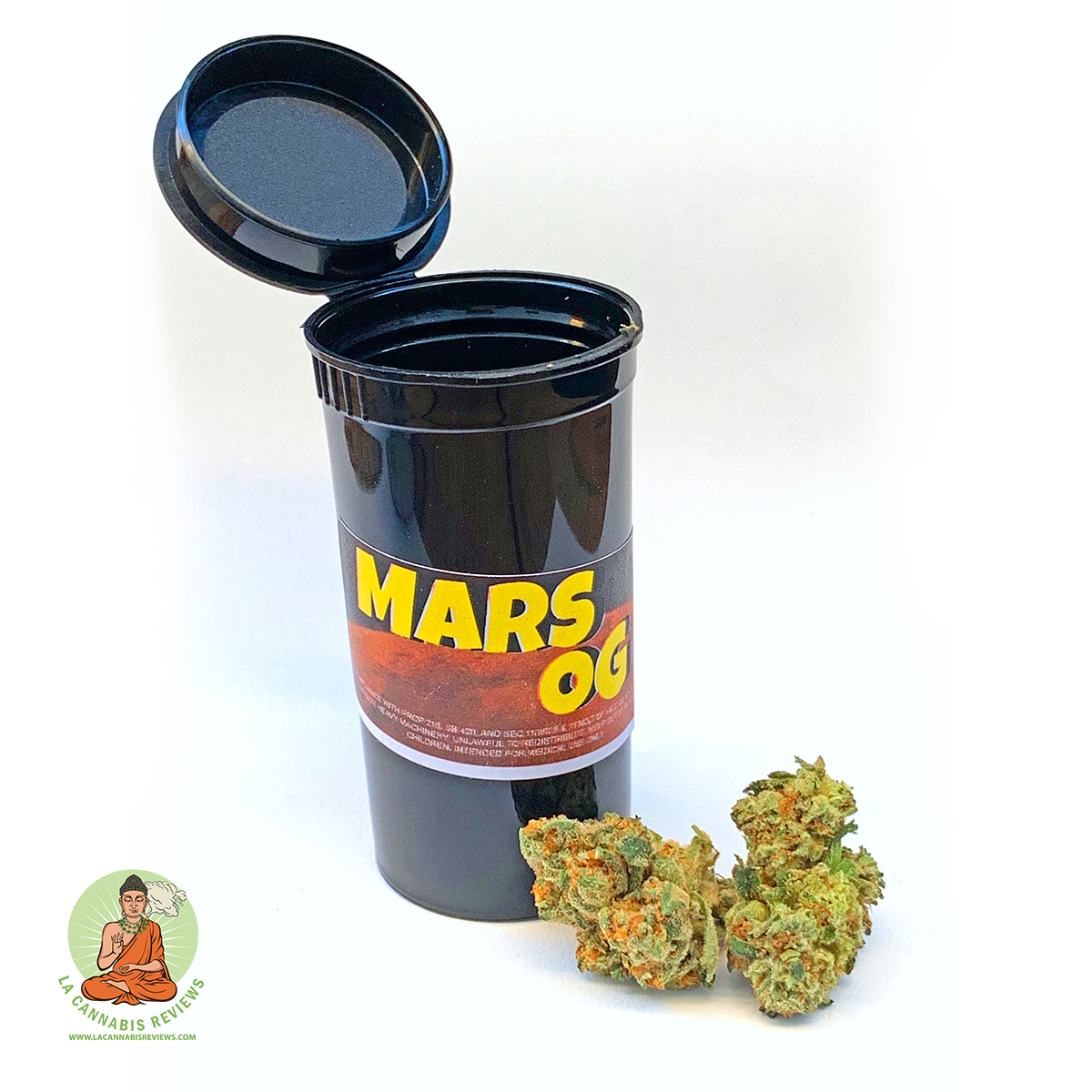 We’ve seen this strain pop up on menus all around town, but we’ve never been able to score some at a dispensary - it’s always been out. Which only added to the legend that this must be some really great flower. So when we finally found some in stock, there was no way we were leaving without any of this amazing, Mars OG.

Appearance 5/5
This was a really healthy looking plant. The leaves were still sticky, difficult to pull apart, and they were covered with fine, fuzzy crystals that rubbed off on our fingertips. The flower is a mellow shade of green with tons of orange threaded throughout the pod. Breathtaking.

Aroma 4/5
While the name might have been otherworldly, the aroma that this plant gave off was very reminiscent of terra firma. It gave off a very earthy scent that was dusty and dark. Even though this flower was bone dry, it smelled like it was soaking wet. It was musty and dank, but not overpowering.

Taste 5/5
Once we sparked our lighters, we blasted off with this flower on a ride that was as flavorful as it was surprising. Our inhale tasted very sweet and fruity. It was only when we exhaled that we could taste the earthiness on our taste buds. The combination of sweet and earthy was quite nice, and it gave this bowl an unexpected kick.

Effect 5/5
It wasn’t until we got high with this plant that we realized where it got its name from -- this Mars OG definitely made us feel spaced out. We had that bug-eyed sense of fuzziness. You know that feeling when your depth perception is slightly off? We were experiencing a severe slowness in all of our movements.

Despite these feelings, we didn’t feel like freaking out or anything. This is a super chill smoke that relaxes you - Indica style. Meaning you might not feel like moving much, but that’s only because your troubles have melted, just like you into your couch. We felt ultra-focused, and ready to dive into any subject and get lost in it for hours. Or at least, until we wanted another hit.

This flower was totally worth the wait.  It’s a powerful little Indica that’s got a unique smell and a surprisingly sweet flavor to it.  Honestly, we think that if Matt Damon had had some of this flower with him, he might not have been trying so hard to get off that “Red Rock.”

Treetop LA is your friendly neighborhood shop on a stretch of San Fernando Road that might not look very inviting, but if you stop here, you’re going to find more than just some great bud.  You’re going to feel like you’ve found something else, a place you want to visit because it’s got the one thing that money can’t buy -- friendliness.

Truth be told, there’s plenty of places to buy bud in Los Angeles. And there’s more popping up everyday, both legitimate and illegal. That means that a dispensary has to be really special for Angelenos to hop into our cars and fight traffic to travel between neighborhoods. TreeTop LA is one of those dispensaries that makes the trip worth it. Not because they have killer products, but because they have a killer vibe.

That vibe is friendliness.

It’s a feeling of chill - a sense of being welcome without them ever having to say it. On our last visit, while we were waiting for our turn to head inside the showroom, we noticed a “regular” enter the shop.

We could tell he was a “regular” right away. He seemed to know the spot, and had a slow, easygoing manner that told us that he (subconsciously) knew exactly what he wanted. The employee at the check-in window gave him a hearty welcome, and they talked for a bit while she checked him in. They obviously knew each other. Apparently, his son had just dropped by recently for the first time.

As two customers exited the back, we were both allowed to go inside. As soon as “Mr. Regular” entered the showroom, all the budtenders gave him big hellos. He knew them all by name, and immediately started asking who had helped his son when he had arrived.

Another available budtender helped us while “Mr. Regular” went about his business, teasing the budtender he spoke to, and even shaking hands with the Security Guard.

To be honest, we were amazed. This guy walked around like he owned the place, and everyone loved him for it. It’s not like we wanted that kind of attention; it’s that we were shocked a dispensary could induce this type of patronage at all. There are certain dispensaries that we love, but very few of them feel like hanging out among friends.

But TreeTop LA is the kind of dispensary that makes you feel that way. Not only do they have “Daily Deals,” but they also have multiple “Loyalty Cards.” Wherein purchases equals punches on the card and, in turn, that equals good deals for you.

Our budtender on this visit was super-cool. They were calm, relaxed, and helped us out with every question we had. We wanted to check out a lot of flower this time, and they showed us everything we asked for, including certain strains based on how we wanted to feel, rather than percentage of potency. They had a lot of great things, but most importantly, they had a strain that we couldn’t say no to -- Mars OG.