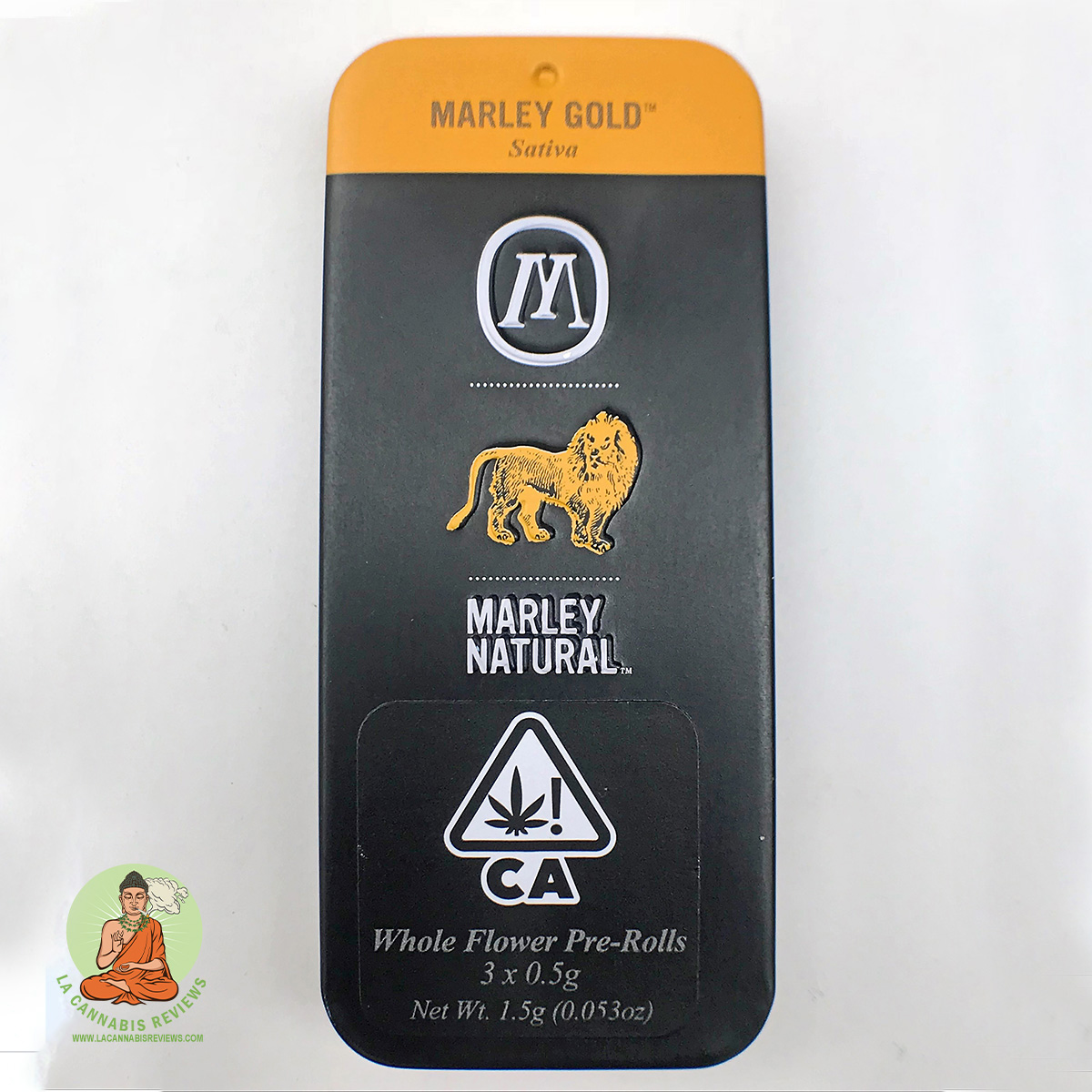 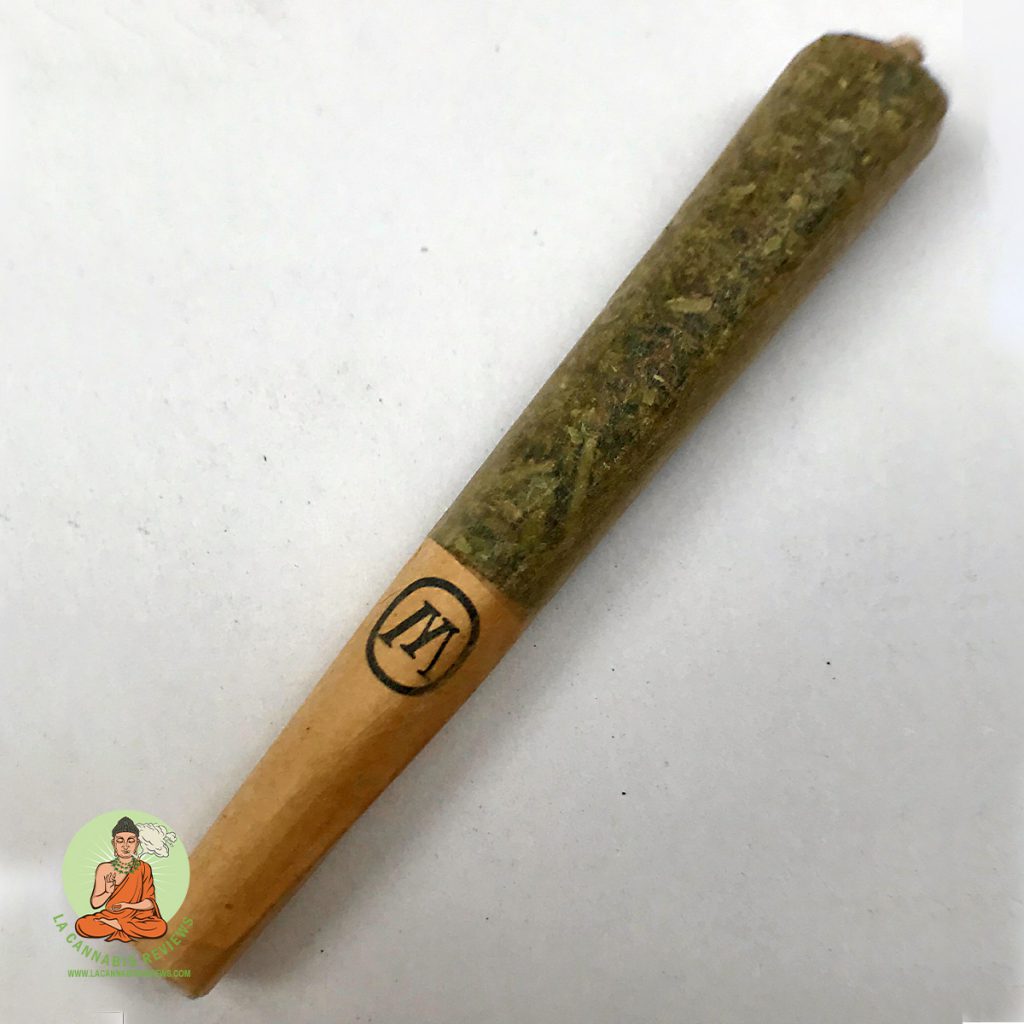 Marley Gold (Sativa)
Bob Marley is famous in the cannabis community. He was a musician, Rastafarian, and marijuana advocate back in a time when such a thing was not commonplace. Marley left his imprint on the smoking world forever. His legacy lives on, both as an icon to be overused on t-shirts, posters, and college dorm room “tapestries,” but also as the namesake of this certain brand of flower named, Marley Natural.

Appearance: 5/5
We love everything about the look of this product. First of all, the packaging is wonderfully simple and elegant. A small metal tin with a sliding top. No larger than it needs to be, perfectly pocket-sized. And surprisingly unpretentious, too. That is, until we noticed the Bob Marley quote on the inside. Oh Marley Natural, you were so close!

Now, the pre-rolls, themselves. They’re small and simple, with half a gram rolled into a cone that’s about the size of a Bic lighter. The wrap is that onion brown color, with the flower itself visible through the paper.

Aroma: 3/5
These pre-rolls came with an absence of aroma. While we appreciate the clandestine quality of a joint, sometimes we miss the smell that comes from fresh flower. Considering most pre-rolled plants are no longer fresh, we couldn’t really count the absence of aroma against this product too much. We love when a joint smells good, though. But, we must admit, it’s not a requirement for a joint to be considered “good.”

Taste: 3/5
Just like the aroma, there was a very bland flavor to these joints. We tasted some oniony hints that we can only assume came from the paper, but otherwise there was just an overall bland, stale taste to this flower. It wasn’t as bad as some pre-rolls we’ve smoked, but it definitely had an herbal aftertaste.

Effect: 5/5
While these joints might not have been a treat for our senses before we started smoking, all of that changed once this thing was lit up. These joints pack a powerful punch, getting us more stoned than we’ve gotten on joints with twice as much flower.

These Marley Natural pre-rolls provided a high that kept us focused and fixated on whatever was on our brains at the moment. We were centered and felt great. By the end, we started coughing on the inhale, and that boosted us even higher. After coughing, we had some of that head buzz that is typical of Indicas, but it was short-lived and not too heavy.

We cannot speak highly enough about these Marley Natural pre-rolls. This 3 pack of joints is small, discreet, and gets the job done right. We can’t wait to throw down on the other varieties. In a perfect world, we’d always have a tin of these in our pockets.

This was a great pack of pre-rolled joints. They were compact but powerful, and we think you’d like them for any occasion. Also, if you ever find yourself in a situation where the salesperson is ready to end the transaction, but you aren’t, just ask to see a few more products you weren’t interested in. That ought to keep them on their toes.

Sometimes awkward things are unavoidable -- you’ll be out shopping, engage with a salesperson, choose an item to purchase, and while deciding on another potential buy, the employee tries to cut things short. They probably just misunderstood your intentions. And, chances are, they aren’t trying to hustle you out the door. Either way, there’s nothing more disengaging than an interaction wherein one person wants it to end too abruptly.

This happened to us the last time we stepped into AHHS in WeHo.

We browsed the menu board while waiting in line, then we stepped up to our budtender. They smiled and asked us what we wanted to look at. We engaged them about something or other, saw a product we liked, and decided we wanted it. As we were thinking about something else, they interjected with a grand total.

“Okay,” the budtender said. “Your total is going to be…”

No annoyance, no harm done. They assumed we were ready to check out, but we were not. They rolled with the punches and asked, “Sure. What would you like to see?”

More browsing and questions resulted in various products being seen and subsequently dismissed. We grabbed something else, and now had our eye on another product. But before we could say anything...

“So your total is now going to be…”

“Um, could we take a look at this over here?” we asked, sheepishly.

They did a double-take, having misread the room for now a second time. It didn’t bother us, but it did seem to throw off their game. They recovered quickly, “Oh...Of course. What else?”

More browsing, questions, deciding, etc. Shortly thereafter, we were loaded up with everything that we had come looking for. But, just as we were about ready to finalize the purchase, we spotted something else that caught our eye. It was in their pre-roll display, a three pack of Marley Natural pre-rolled joints.

But we knew exactly what was coming next. We waited, didn’t say anything through their pause, and then like a broken record, the same words came out again: “So, all of this together…”

“Uh, actually, we’d like to maybe grab one more thing.”

They might have been annoyed with us this time, but we couldn’t help ourselves. How many times do we have to have an awkward moment before they change their question to: “Will there be anything else?”

Now we’re not trying to call anyone out, or put this shop on blast for having terrible employees. When it comes to the service industry (in which medical marijuana is rapidly becoming a major player), we realize that everyone has a “bad day.” And we always try to give everyone the benefit of the doubt.