We match two pre-rolled joints against each other in a head-to-head smokedown.

Ladies and gentlemen, welcome to Light Club.  Both will be lit. Only one will win.

After a while, the same thing just gets boring. Even if there is a variety, eventually that variety will become pedestrian.

When it comes to pre-rolled joints, you typically see all the same flavors everywhere — Strawberry, Raspberry/Blue Raspberry, Banana, Grape, and Vanilla.

It’s not their fault. It’s the repetition of them all over the map. We like flavored joints, but we want to see something different. Something new. Something that will make us sit up and go, “ehh?”

On our last visit to the Church of Walnut, that very thing happened. We looked at their pre-roll selection and said, “ehh?” Mainly, because they had flavors that we weren’t used to seeing, along with a variety of different brands. It’s truly a great selection at a great shop. We recommend you check out both.

We picked up a few unique choices, and decided to pit them against each other in a Battle of Forgotten Flavors. 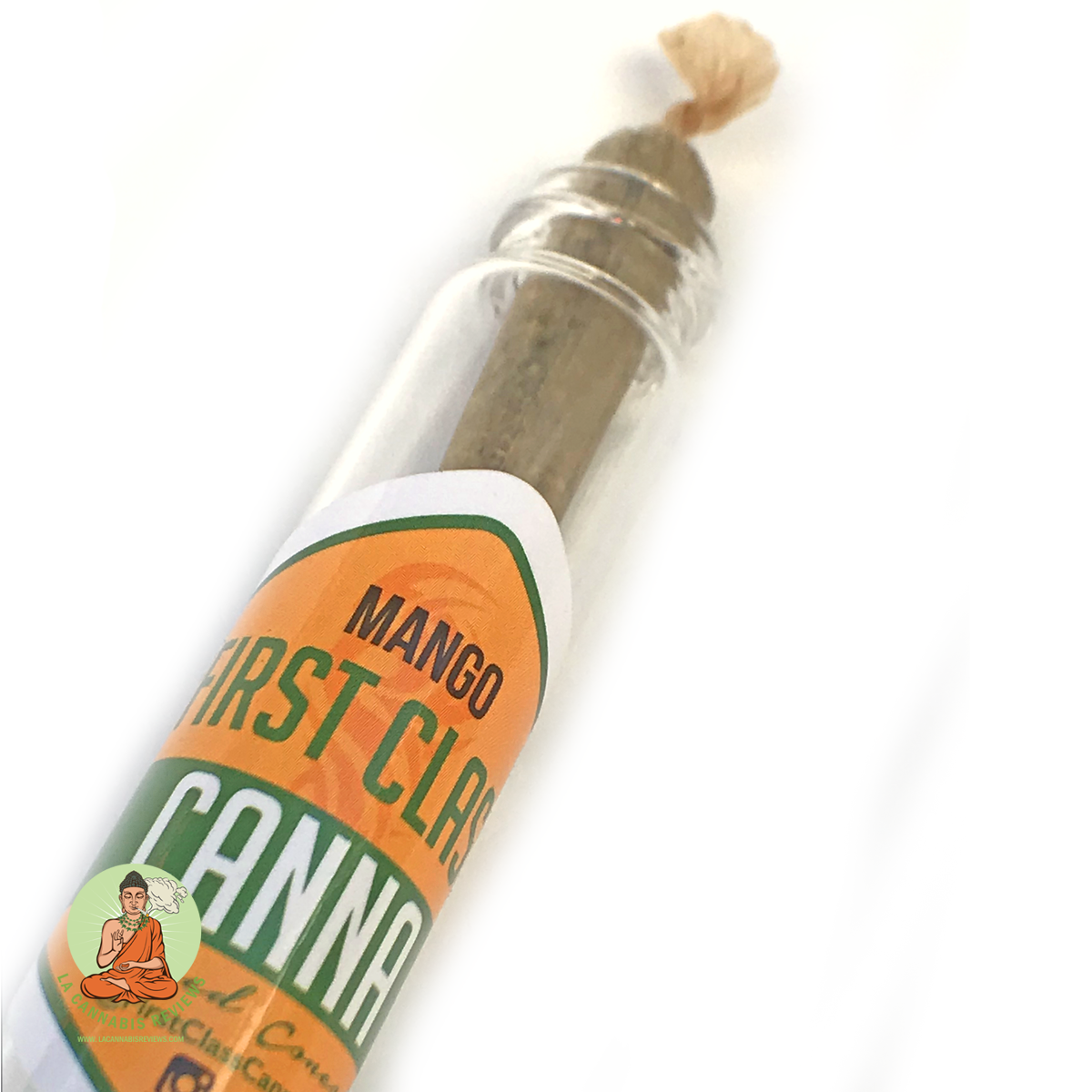 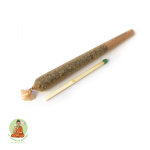 We were familiar with this brand, but we didn’t know they made pre-rolls. The First Class Canna offers a great selection of flower that’s been infused with oil, and dipped in kief. A “moonrock” in everything but name only, it’s our favorite super-strong bud to pick up when we need that extra boost. How would their flower smoke when it was in a pre-roll? We didn’t know, but we were going to get to the bottom of it. Inquiring minds are desperate to know.

Appearance: 5/5
Not only does this joint look great, but it gets an A for presentation, as well. Coming to us inside a glass tube with two strike-anywhere matches included, this joint is rolled and ready to go at a moment’s notice. It’s a very clean looking cone, well-rolled, and evenly proportioned. The paper is dotted with dark spots, but we suspect those are little bits of goodness waiting for us, like M&M’s inside a McFlurry.

Aroma: 4/5
There was a definite sweetness to the smell of this joint. It was fruity, too, but not overpowering – nor was it sickly sweet. The odor reminded us of an air freshener, but a good one.

Taste: 4/5
This smoke came with mango flavoring, but what was more prominent was how harsh this smoke was. Perhaps it was the process the flower had been subjected to, but this pre-roll made us cough and had a rather tough bite.

Usually with pre-rolled joints, you smell the flavor a lot more than you taste it. But this was the opposite — there was more mango in the smoke than there was when we took a whiff.

Effect: 5/5
We knew that since this cone was packed with First Class Canna that it was going to be strong. But this high was so strong, it surprised us. And the effects came in waves.

First off, before the joint was even finished, our peripheral vision was blurred. That was our first, “hey we might be feeling something” moment.

Then, we went into Attack Mode. Full productivity, wanting to get stuff done, and we were multitasking like a mother. We were moving around like the Energizer Bunny after a battery change. It was crazy. The sidelines of our eyeballs were still blurry, which threw off our sense of space, so moving around was a bit awkward.

And then, the crash. Suddenly, we were seated, nearly laying down, about to doze off. This Mango joint lifted us up and dropped us super hard. And we loved every second of it.

Recommendation
We were very impressed with this joint. It tasted great, looked appetizing, and took us on a roller coaster of sensations after we smoked it. It might have started to canoe at the very end, but by then we were so high that it didn’t even matter to us. 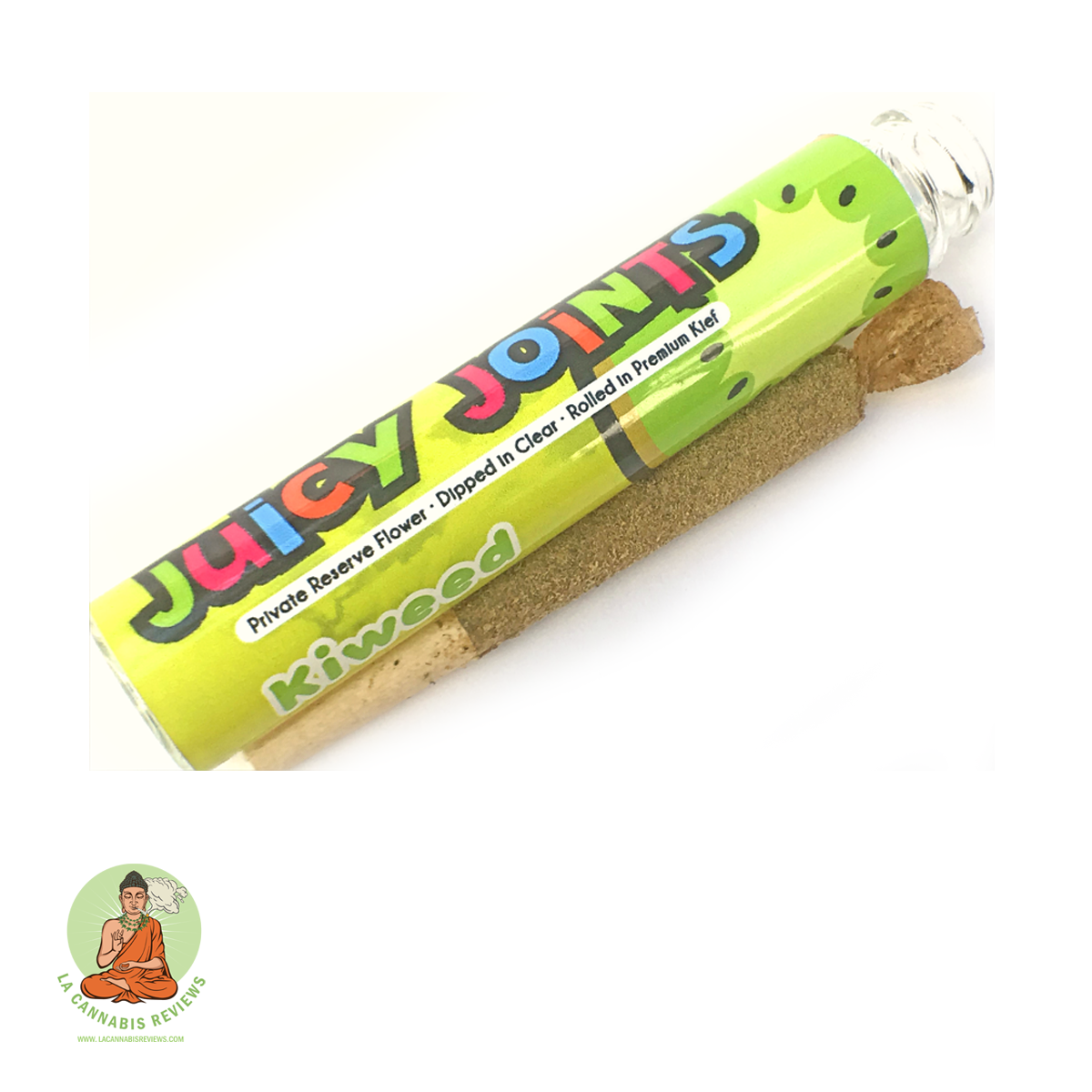 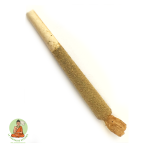 We had never heard of Juicy Joints, but they entertained us with their flavors. They had marijuana themed names like “Cotton Candy Mouth,” “Strawberry Short Baked,” and of course, “Kiweed.” How would this Kiweed joint stack up against a First Class Canna joint? As we’re fond of saying around here, there’s only one way to find out.

Appearance: 3/5
This joint sports the credentials that it’s been rolled with premium flower, dipped in clear (whatever that means), and rolled with kief. While all of these things might be true, it didn’t produce a great looking joint. The cone appears evenly rolled with a nice shape and size, but the twist at the end appears to be extra long, as if they ran out of flower while filling it. The extra twist gives the entire production a rushed, haphazard feeling. Hopefully they took more time and care than things appear.

Aroma: 3/5
This joint had an interesting odor, but it wasn’t very kiwi-like to us. It had a sweetness that was both rich and natural. It was a little strange since both aromas seemed to be competing with each other, blending into something that resembled the smell of chocolate-covered blueberries.

Taste: 4/5
While the aroma was unexpected, things got back on track once we started to smoke it. The cone burned very well and evenly. And the smoke we tasted was fruity, but not very sweet. Overly sweet joints can be hard to smoke, so we were grateful that this one came with a little restraint.

Effect: 3/5
Just like the taste, the potency of this joint wasn’t as strong as we were expecting. But unlike the taste, we were disappointed by the lack of strength.

It was past the halfway mark on this joint before we started to feel anything, and the effects were pretty mild at that. There was no strain classification on this joint, but we felt like it was a Sativa dominant high. We felt peppy, happy, and talkative. An overall injection of positive vibes washed away our worries and made us recenter ourselves. For us, at the end of a long day, it was just what the doctor ordered.

Recommendation
We walked away a little disappointed with this Juicy Joint. It raised eyebrows with the sight test, and the smell/taste tests were passed, but the joint didn’t smoke as strong (or as well) as we would’ve hoped. It started to clog near the end, and we had to ditch the wrap and place the end of it in a bowl in order to finish the cone. Which, as you could imagine, was not ideal.

Not only did the First Class Canna joint deliver more on its promise, but its effects were long-lasting and took us to more interesting places. Apologies to the Kiwi (and to the people of New Zealand), but the Mango won out at the end of the day.