There wasn’t much information we could find about the VVS brand. Their website had frequent reloading issues, and beyond the label, there wasn’t much else to be known about this mysterious company.

Opting for gold lettering against a black background, we thought it represented an outdated aesthetic of excess wealth that felt more at home in the Luxor Casino, than it did inside a marijuana dispensary. But the proof is in the pudding, as they say. And as long as they smoked great, who really cares what the package looks like?

So it was on our last visit to Dope Girls LA that we decided to grab a couple of VVS cones and see how they squared off against each other — a King Louis XIII OG pre-roll versus a Blueberry Diesel joint. 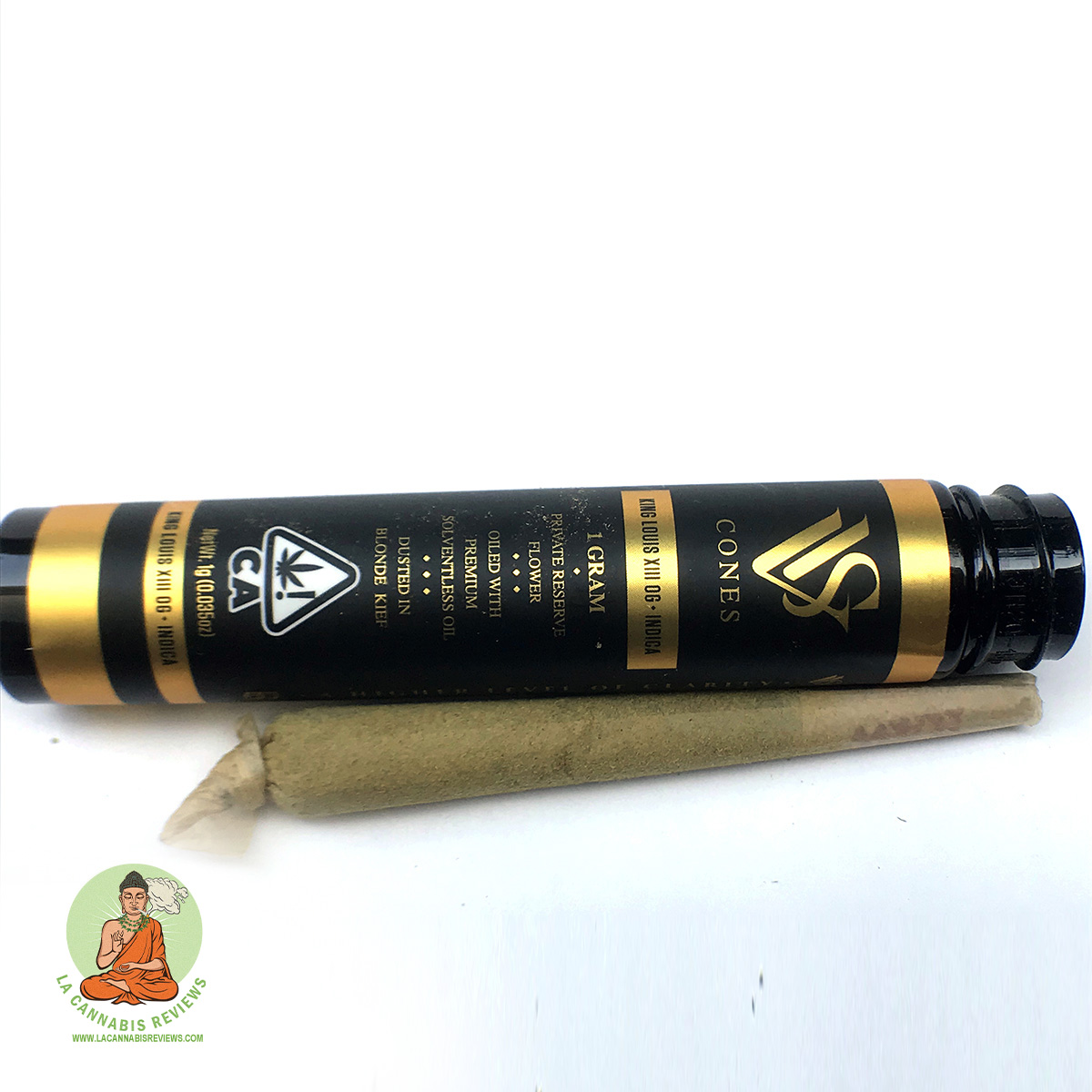 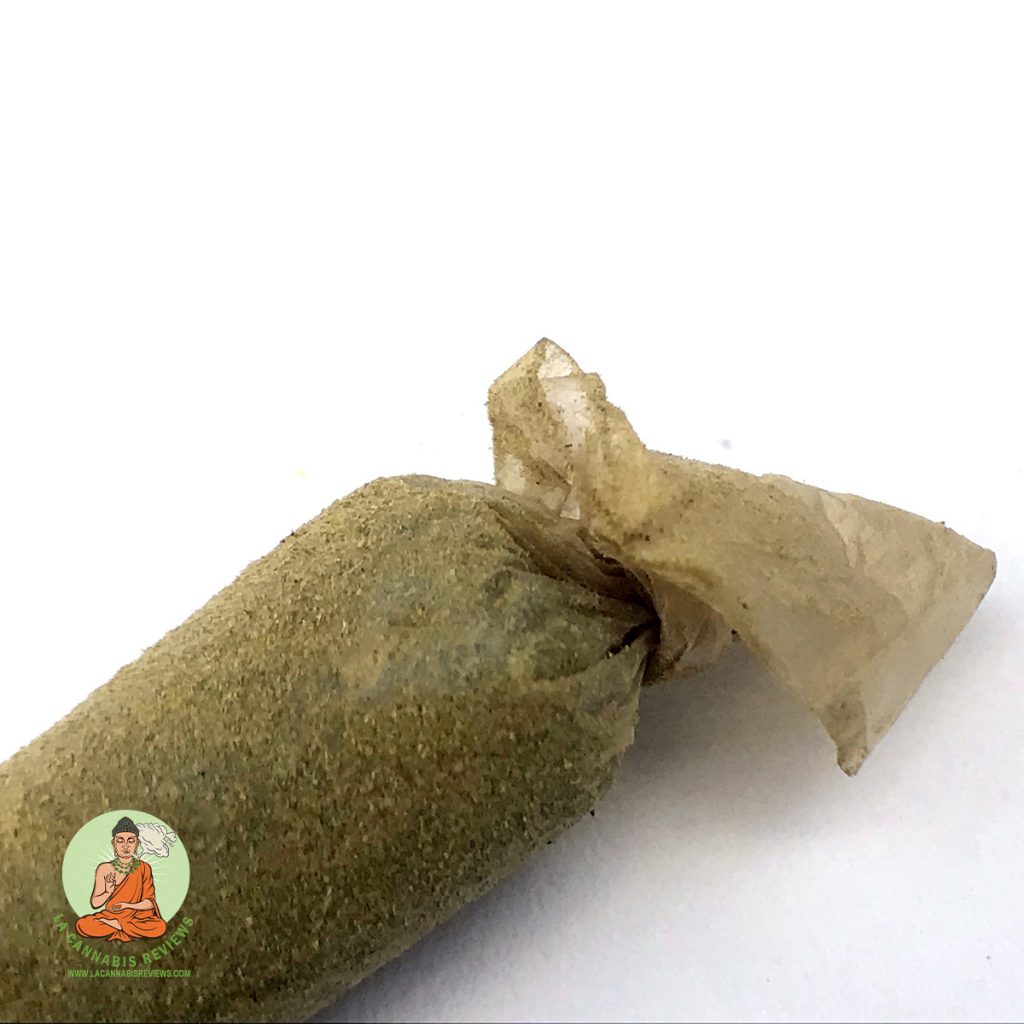 King Louis XIII was a boy king who inherited the throne before his ninth birthday, and ruled for decades, purportedly while suffering from mental instability and chronic illness. We’re not sure why that makes him such a “household name” in the cannabis community, but it sounds like he could have used some herb, to be honest.

Appearance: 3/5
We’re not sure what happened here, but this joint came to us with an extremely long twist at the end of it. The size of the cone is comparable to our Blueberry Diesel contender, so it doesn’t feel like we’ve been short-changed any bud. There just happens to be an extra big twist at the front of this joint. In other words, this King Louis joint needs a haircut!

Besides that, this joint was covered with golden kief, which gave it a lovely color and look. But the flower was not evenly packed. There was some extra space and creases visible upon first removing it from the package. This did not bode well for the future, and we hoped that this King wouldn’t disappoint us.

Aroma: 3/5
This joint had an odd odor. It was bitter and musky, smelling like a combination of dust and black pepper. Sort of like the cannabis equivalent of Axe Body Spray. Not our favorite, to say the least.

Taste: 3/5
While we weren’t fans of the fragrance, thankfully this joint smoked had a very neutral flavor. The strongest taste on the tongue was the carbon of burnt flower, with hints of dust and pepper making the flavor bitter and dark. It wasn’t a great taste, but it was hardly offensive enough to toss away.

Effect: 5/5
While this joint failed to “wow” us up to this point, everything changed once we started to smoke it. The effects were mild, but they were ultra-pleasant and positive. This joint totally energized us. We weren’t super-stoned, but we were super-motivated. It was like getting the most bang for your buck, and it was definitely a surprising turn around.

Recommendation
This King Louis XIII OG joint did not seem like it was going to smoke as great as it did. It didn’t look like much, but we’ve always been taught to never judge a book by its cover. And good thing, too, because this cone hit us just right when we lit it up. 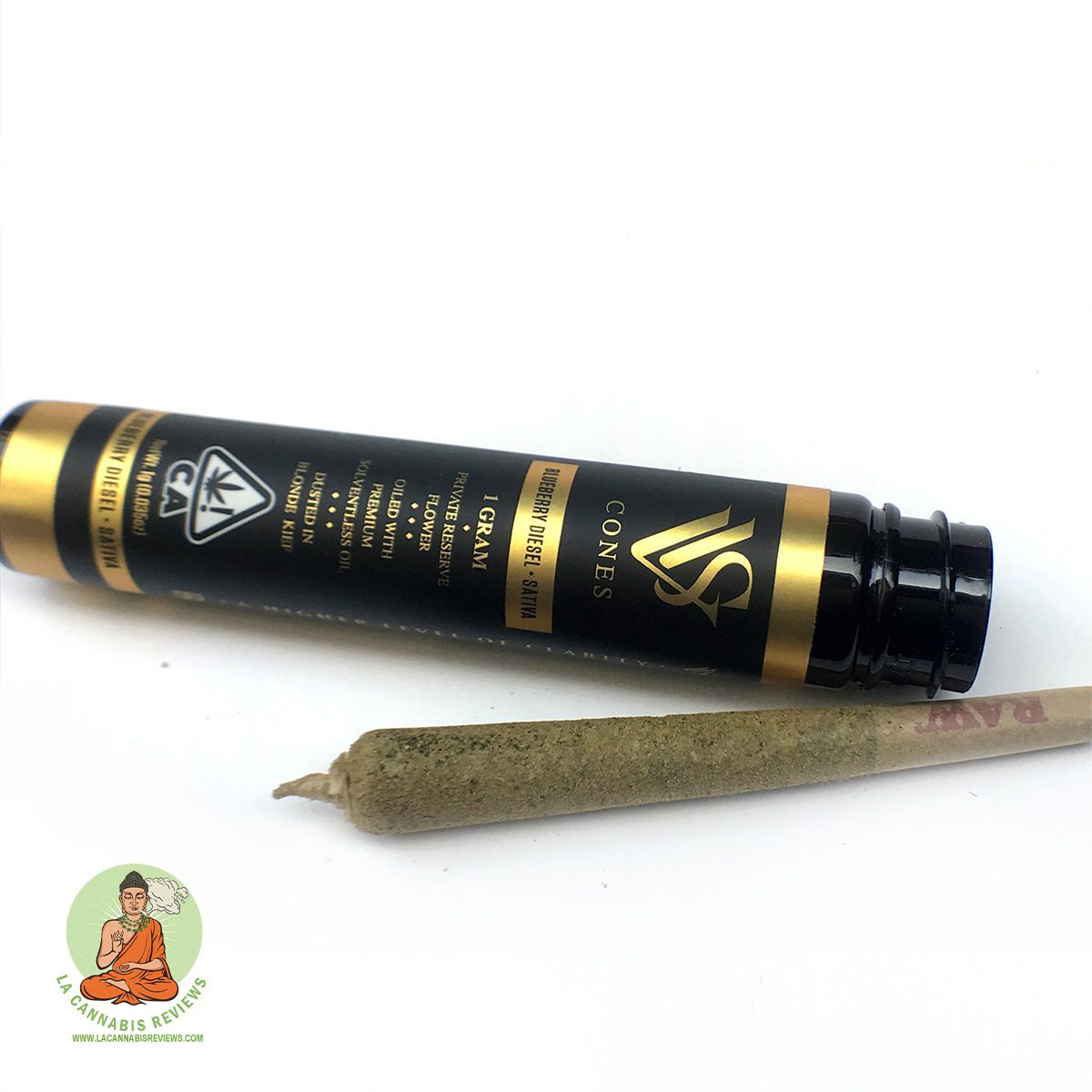 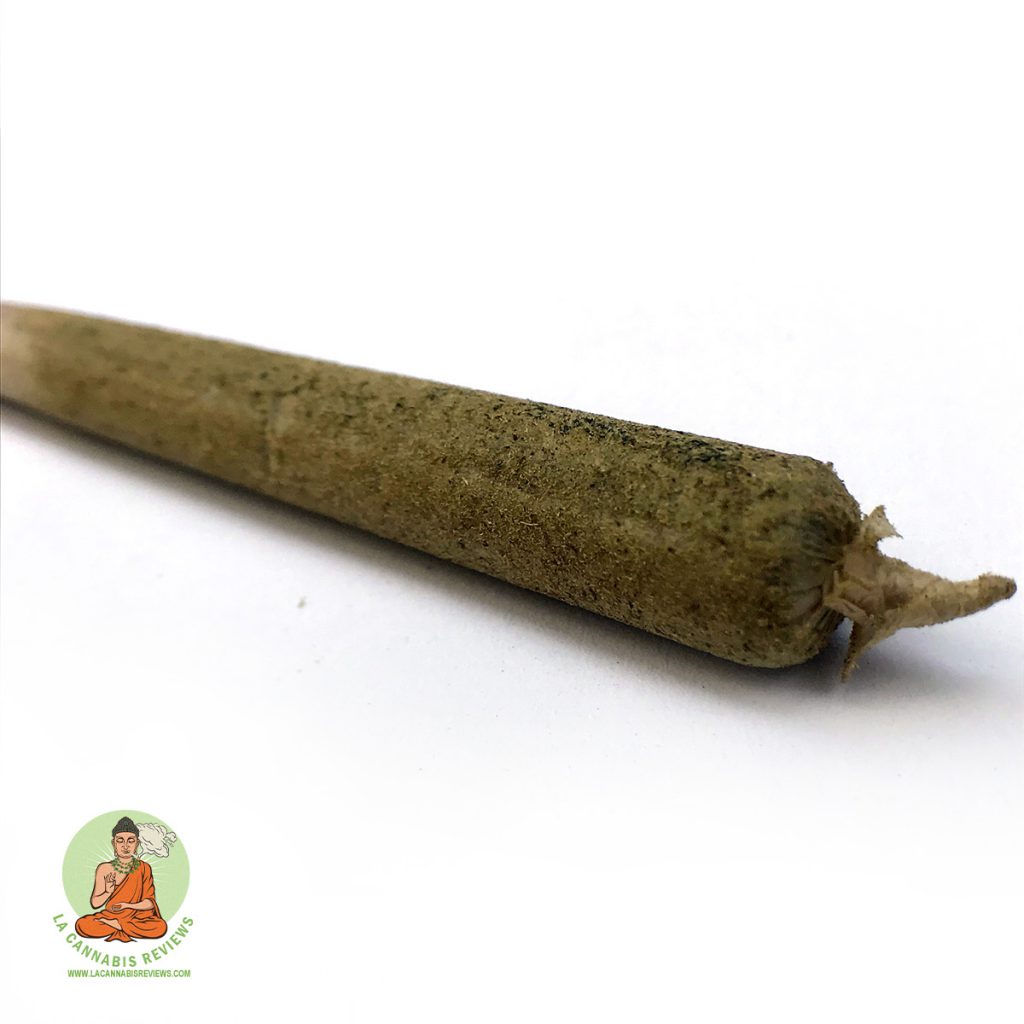 Speaking of randomly common objects in cannabis culture, what’s the obsession with the blueberry? As far as we can figure, the berry’s unique aroma and coloring sometimes approximates the dankest and darkest of buds. Hey, that’s good enough for us. We love blueberries.

Appearance: 4/5
This joint looked slightly healthier than our King Louis pre-roll. Once again, it was covered with golden kief. However, this joint had some bigger, green flecks of plant matter stuck to one side, giving it a much greener look. It was evenly packed and seemed adequately-stuffed, with a firestarter at the tip that didn’t look excessive to us. It was a well-packed, slightly stout, looking pre-roll.

Aroma: 4/5
Despite having blueberry in its name, this strain did not deliver a sweet smelling fragrance. Instead, we got a strong, earthy aroma off of this plant. It was like the smell of petrichor — that wonderfully aromatic earthy smell unlocked once rain hits dry soil. Unexpected, but wonderful.

Taste: 2/5
While this joint came with a very strong taste, we couldn’t detect the presence of a specific flavor. It had a harsh smoke that was difficult to drag on, and the exhale was tacky on our tongue without any rewarding sweetness or savoriness.

Effect: 3/5
Much like the King Louis XIII OG joint, this pre-roll had an energizing effect on us — but not in a positive way.

This Blueberry Diesel twist made us completely paranoid and uncomfortable in our surroundings. Although it was packaged as a Sativa, it delivered a strong Indica head buzz; namely, a hyper-awareness of minute details, and the energy to dissect them ad nauseum.

This was a really strange thing to happen to us, since we’re not prone to paranoia, especially not from a Sativa joint. But this Blueberry Diesel took us for a ride, and we couldn’t do anything but go along with it.

Recommendation
This was a disappointing smoke. This VVS Blueberry Diesel cone made us paranoid and introspective to a negative degree. On top of that, it was difficult to smoke — the flower was too wet and tight, which prevented a clean drag. And the joint itself was loosely packed and canoed hard when we burned it.

In the end, we had to ditch the remainder of the wrap and deposited the rest of the flower into our bowl. After a great experience with our first VVS encounter, this was a major surprise – in that it was a massive letdown.

When it comes to VVS cones, this Indica outclassed the Sativa in nearly every category. It was better looking, better made, and the effects were way more desirable. We think the VVS brand, despite a mysterious backstory, offers some good products. We loved our Indica, but didn’t like our Sativa – at all. Would we try a Hybrid? You bet.