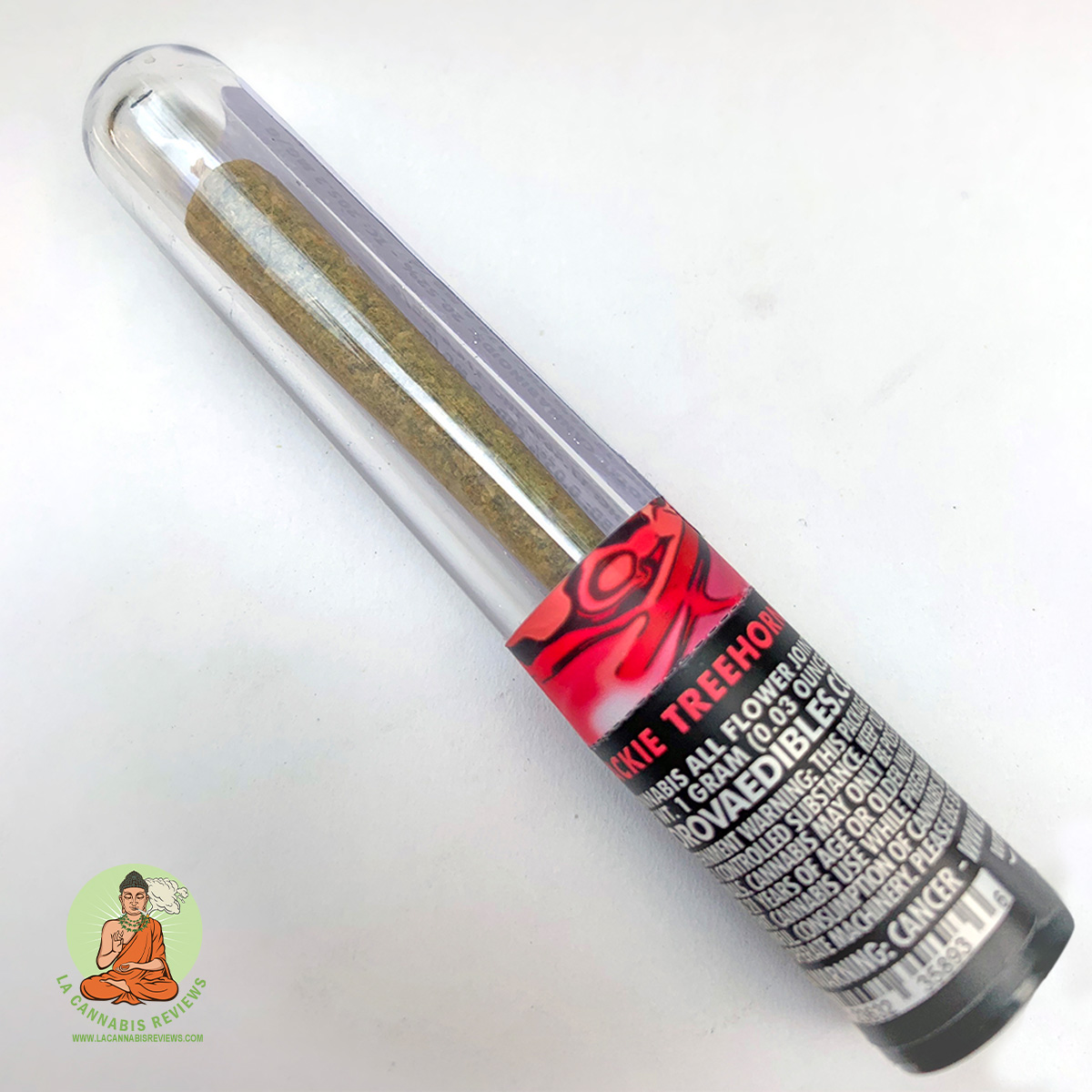 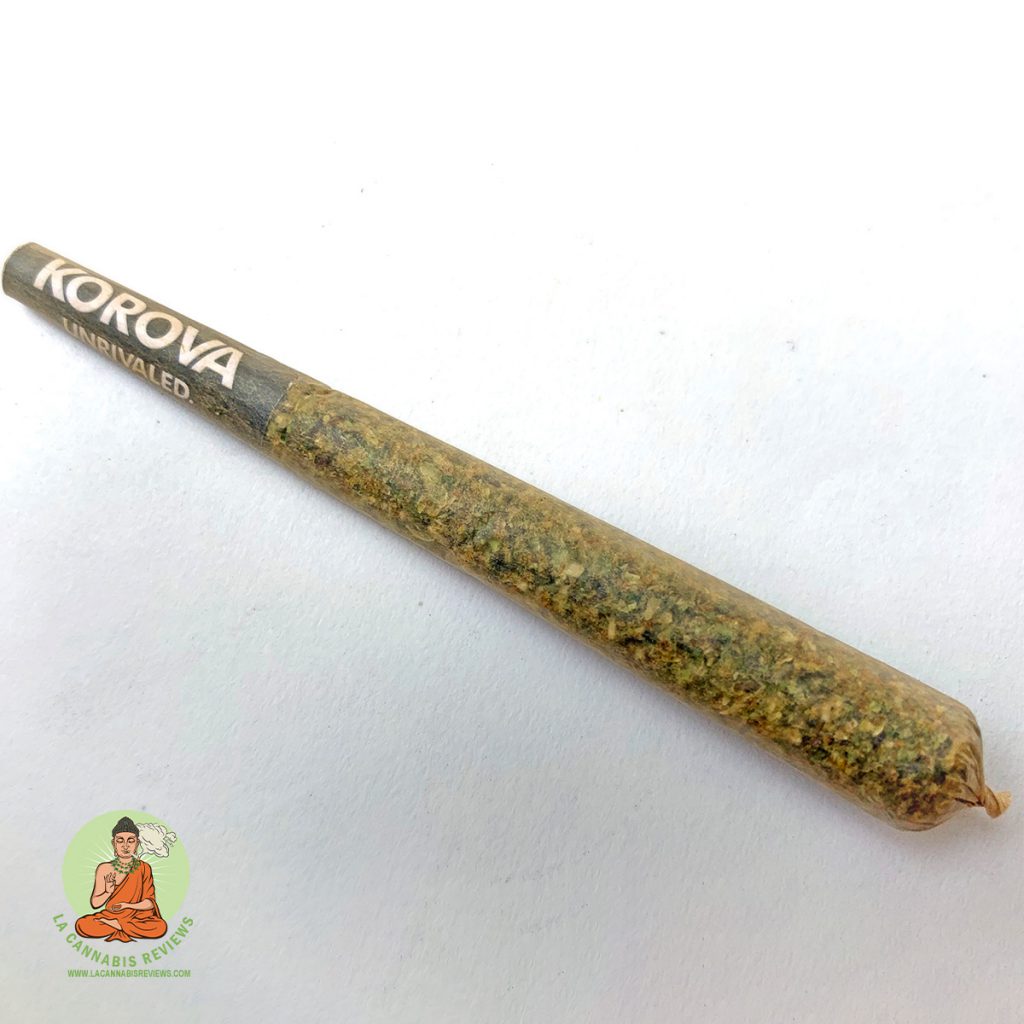 Appearance
A full cone packed with one gram of flower. 100%
Aroma
light, sweet, and floral 60%
Taste
didn’t have much of a taste 60%
Effect
I was puffing hard until the end before I felt anything 20%

Korova Pre-Rolled Jackie Treehorn Joint (Sativa)
If the brand name sounds familiar, that’s because it should -- Korova is responsible for a line of dynamite edibles that might be the best (and strongest) ones of the market. This is the first time I’ve ever seen any flower from them, let alone some that’s been weaponized into a pre-rolled joint. Would their joints be as strong as their edibles? Read on to find out.

Appearance: 5/5
First of all, let’s just put on record that I dig the packaging. The joint comes housed in a rounded glass tube that twists open. When I pulled it open, I realized the joint was perfectly resting inside the plastic end, like a professionally-displayed specimen. Pretty cool.

As for the joint itself, it had a nice, healthy shape. A full cone packed with one gram of flower. It was expertly rolled, and came to a fine little point at the very end.

Aroma: 3/5
This is where things got weird.

I took a big whiff of this pre-roll and came away with something that I wasn’t quite expecting. It was light, sweet, and floral. But also bitter, clean, and chemically fresh. The aroma made me feel like I was seated between a bed of jasmine flowers and a swimming pool.

Taste: 3/5
The not-so-great surprise train kept a-rollin’ as I lit it up and took my first few drags of this joint. It was hard to taste anything at first, since the joint was so tightly packed that it required some force to even get a good inhale. I was sucking so hard that my lungs were screaming, and I still wasn’t getting a good taste of this smoke.

Finally, I discovered that the smoke didn’t have much of a taste, after all. It had a bland, waxy flavor that left barely a trace on the taste buds. There might have been a little fruity accent on the exhale, but it was barely noticeable.

Effect: 1/5
This joint took me on a canoe trip up the river, and all I got was stoned - barely.

This Jackie Treehorn flower is supposed to be a Sativa, but it was a “barely-there” Sativa, at best. I was puffing hard until the end before I felt anything, and the body buzz wasn’t anything to write home about. I can’t even say that it was relaxing like a Sativa high should be, it just made me feel stoned - kind of.

If you had told me this was a joint full of swag, I would have totally believed you.

Considering the strength of the brand name, I expected better things from this offering. But this Korova pre-roll was a total disappointment. It looked great and smelled, uh, interesting, but it was hard to smoke, unsatisfying, and ultimately, unrewarding. For a high-end of marketplace pre-roll, I want more bang for my buck. Nay, I demand it.

If you haven’t seen The Big Lebowski, you should do so immediately. I consider it one of the best comedies of all time, with so many jokes layered upon each other that I find something different to laugh at each time I watch it.

And if you haven’t checked in with Buddha Company DTLA, then you most definitely need to make that a priority. This place is stocked with so much product. While I was disappointed with this pre-rolled joint, that doesn’t mean I won’t be back.

Is The Big Lebowski the best stoner movie of all time?

Let me rephrase that: Is “The Dude” the best depiction of a heavy marijuana user ever put on film?

Anyone who has ever used marijuana for an extended period of time will likely identify with the saga of one, Jeffrey Lebowski (not the married one, the other one) and his odd trip through Los Angeles to get his rug back. The film is very adept at capturing the sense of mundane absurdity that we feel when we’re high. Everything is real, but it’s also very funny if you look at it a certain way.

It also totally nails how the events of a day can have a rambling quality that almost feels designed with an unknown higher purpose. It might actually make sense -- the way appetizers lead to the entrees, which segue right into dessert. But when you’re stoned, the whole thing can lose logic and feel like a nonsensical parade of food.

The movie, itself, feels like it’s gotten a contact high. It has a very silly, absurd plot that’s basically spoiler-proof, since what happens isn’t nearly as important as how it happens. But to describe it more would detract from the thrill of experiencing it for the first time.

If you have seen the movie, you know that “The Dude” is probably way too much of a shaggy dog to shop at Buddha Company DTLA. Which is a damn shame, because we think “The Dude” would love this place.

What’s not to love? He could get hooked up on the best brand-name flower, or perhaps a pre-rolled joint, or even an edible if he wanted. And if that old 60s hippie has finally joined the twenty-first century, there are plenty of waxes, vapes, tinctures, and topicals that would satisfy his groovy soul. And, yes, we know he’s a little slow, but that wouldn’t matter at all because the Buddha Company’s budtenders assist you one-on-one, guiding you through the inventory, assisting you based on the customer’s needs - not just their budget. They offer first class service that any level of user would appreciate.

But the real reason we’ve got The Big Lebowski on our brains is because, on our last visit, we scooped up an item that might sound familiar to him -- a pre-rolled joint from Korova packed with a flower named, Jackie Treehorn.