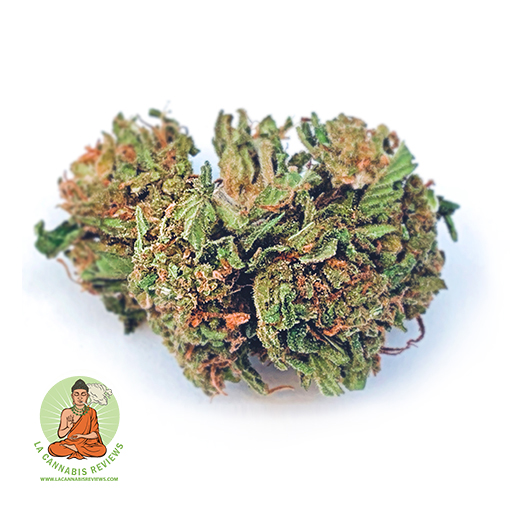 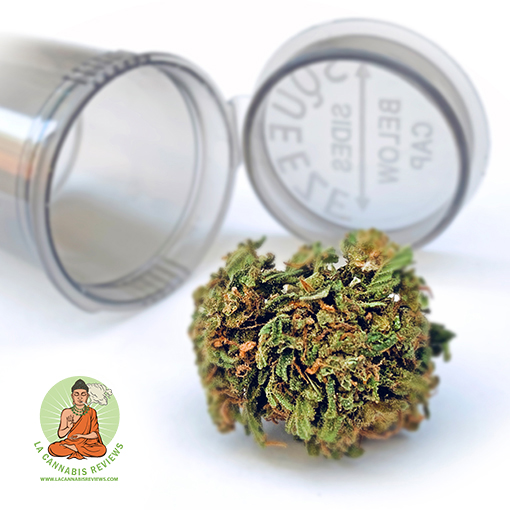 Appearance
This is a wonderfully leafy looking plant 80%
Aroma
Twang of sweetness on the very end 80%
Taste
Something earthy and hollow, almost tasting like cardboard. 80%
Effect
It was a creeping relaxation, a good - but not too heavy - buzzing inside my head 80%

When it comes to marijuana, things haven’t gotten mainstream enough for brand recognition just yet. Sure, we know that the Lowell Smokes or MedMen brand names might carry some cache with consumers who are in the know, but there isn’t a name that means both cannabis and quality that even your Mom may be aware of (unless she likes to get high, that is.)

This became apparent to me when I spotted this strain of Gucci at the Dank. While it didn’t come with a faux-Gucci pop top container (which would have been a nice touch), I was curious to see if this strain would live up to its moniker.

Appearance 4/5
This is a wonderfully leafy looking plant. The leaves are a shade of dark green, which makes me believe that this plant was grown outdoors. The orange tendrils twist all around the pod, and the outermost leaves have a dry, flaky quality that makes them pull apart and crumble very easily. Upon a closer look, you can see the crystals sparkle along the surface. It’s a flower that carries a lot of subtle beauty.

Aroma 4/5
This was not a very fragrant flower, but I found it to smell slightly sweet (if you’re willing to search for it). A lot of outdoor plants that I’ve smoked in the past usually do not carry a strong aroma, and this one was no exception. But getting in close and taking a pull revealed that this was a flower that wore its earthiness on its sleeve, giving off a leafy and dirt-centric smell that had a twang of sweetness on the very end.

Taste 4/5
Like a lot of flowers that carry a very soft aroma, this plant showed off a bold taste once I started to smoke it. Our inhale was very sharp and perfumey, a big smoke that I could really taste. After my exhale, I noticed that there was a particular aftertaste that lingered on the tongue. It smacked of something earthy and hollow, almost tasting like cardboard.

Effect 4/5
This strain provided me with a very mellow high. Unlike the brand it’s named after, this wasn’t a flashy or bold sensation. It was a creeping relaxation, paired with some intensified focus and a good - but not too heavy - buzzing inside my head. I could feel my worries melting away after smoking this, allowing me to focus on what really mattered at the moment. My gradual calm eventually gave way to full blown bliss, but I wasn’t stuck in one place -- I was still peppy and mobile.

We wound up loving this strain of Gucci.  It’s a great Indica high that centers you without body-slamming you into your sofa.  I think it would be great for patients with anxiety or overthinking issues, not to mention great for anyone that needs help with focus and energy.  After one hit of this, you’ll be so in love with this strain that you’ll buy real Gucci clothes, just to rep the flower.

Dankilicious 15 Cap seems to have a very loyal customer base.  I’ve seen some of the same people during my visits there, and I’ve enjoyed chatting them up and hanging out with them.

Unfortunately, the employees at the shop are not as friendly or as welcoming as their clientele.  They treated me like a customer they didn’t want, and didn’t even label the two purchases, so I couldn’t tell which plant was which.  If you’re in Mid-City, skip this shop for another one in the area.  If you’re not already a regular, you aren’t welcome.

When it comes to awesome dispensaries, I’m usually thinking about the flower above all else. But sometimes the difference between one shop and another comes down to something as simple and mercurial as “the vibe” -- the general feeling of the shop, how it greets their customers, how it treats me, personally. It’s undefinable, yet monumental. And when it comes to “the vibe” down at Dankilicious 15 Cap, my last trip gave me whiplash.

I found parking in the lot, which is clutch for this part of town. As I headed for the shop, there was a dude hauling is bicycle up the stairs with one hand. Considering it was a hot August afternoon, this was mighty tiring work. We both entered Dank’s waiting room, and the dude told me I could go ahead of him.

“Really?” I asked, surprised by his act of kindness.

He nodded and said, “I’m in no hurry. I can sit and cool off for a minute.”

We both took a seat. A minute later, another person came in. They brought their dog with them, an adorable and super friendly golden retriever. We asked if we could pet their dog, and they said absolutely. I was just getting my first pets in when I was allowed back into the showroom. Damn, that was too bad. I wanted to hang out with that dog!

Entering the showroom was where everything flipped for me. Suddenly, there was a chill in the air. The budtender greeted me, but their voice was very low and difficult to hear over the radio. I asked about prices, and they pointed to a placard on the counter that listed everything. I asked about recommendations, and they started putting jars in front of me. No explanation or background on any of them. Just opened them up and laid them out for me to examine. If I wanted to know anything besides the name, it looked like I was on my own.

After glancing over what had been laid out, I decided on one of the flowers. The budtender quickly weighed it out and put it into a container. “Twelve bucks.”

At that moment, I was glancing at another shelf. Maybe they were just bad at reading body language, but I always hate paying before being asked, “Will there be anything else?”

I told them, actually, I’d like to look at those jars over there, too. They showed me more stuff and I grabbed another gram. Then it came again -- “Twenty bucks.”

Actually, I had been interested in some pre-rolls, as well… but forget it. I felt like I was being rushed out of the shop, and I decided to take the hint. I’d rather spend money at a place where they seem to appreciate my business. I paid and left, but made sure to pet that dog again on my way out, because...I just had to.

But it doesn’t end there. The ultimate insult came when I got home and realized the budtender had not labeled my purchases. I had two containers without labels at all. What a jerk! Is it too much to ask to label these containers? I guess they aren’t looking for me to come back for more. Too bad.