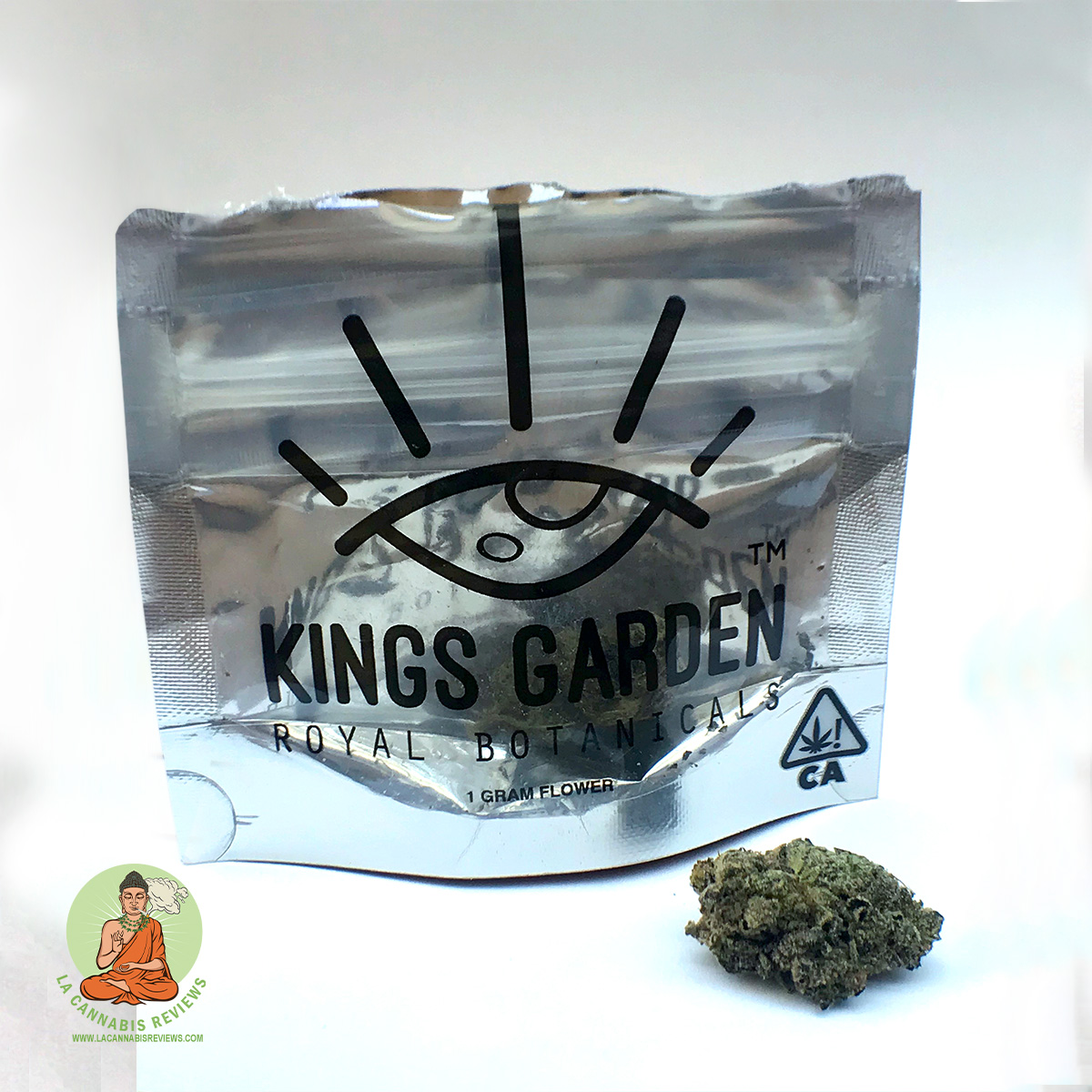 Gelato (Hybrid)
This plant comes to us via the King’s Garden brand. The packaging states that this flower was cultivated locally in the Coachella Valley, about two hours outside of LA (traffic permitting). It’s always exciting to see local products in stores. It reminds us that marijuana is still a small business, and like any farming operation, the less middlemen involved results in a better, fresher product. We tore open our plastic bag, and hoped that the middlemen hadn’t meddled in this mary jane.

Appearance: 3/5
You might not see a lot upon first glance, so you’ll have to look closer to really admire the qualities of this flower. Looking past the medium-dark shade of green, you can really start to see how the orange tendrils pop up in between the leaves. The orange and green are so similar in color that they almost blend together into a shade of purple/brown (this outdoor-grown plant has definitely been sunbaked). Look further and you’ll spot random crystals along the surface.

Aroma: 4/5
This flower not only looked fresh, but it smelled fresh, as well. As we dipped our noses into the bag, we couldn’t help but think that we were smelling the aroma of fresh mint - both sweet and sour, natural but also muted. It was wonderful, but subtle.

Taste: 3/5
As we smoked this plant, we couldn’t help but think that while pleasant, it was a bit bland. The fresh aroma translated to a natural taste that was a little dark and a little leafy. But it wasn’t enough to make us cringe. What it lacked in flavor, it made up for in smooth smokability. This smoke was very neutral, meaning it didn’t burn our throats, or coat our tongues with anything that tasted off putting.

Effect: 4/5
This strain is the perfect example of a Hybrid that’s a “companion, not a guide.” It had a very subtle effect, leaning more towards a Sativa sensation, rather than an Indica.

It’s a calm feeling that washes over you. You feel a little bit of a head buzz, but most of the effect goes towards your body and your insides -- soothing them, relaxing them, all while melting anxieties away. We think this would be a great strain for anyone that needs help with anxiety or other social issues. Nothing will be able to touch you after smoking this flower.

Also, be warned -- this strain is a sleeper. You won’t be feeling it after your first hit, so give yourself some time to feel it before you go crazy.

Looks can be deceiving, and if you were passing this Gelato on the street (or in your local dispensary’s display case), then you might not give it more than a passing glance. That would be too bad, because this is a totally groovy flower that gives you a smooth, subtle, and surprisingly long-lasting hang-out high that’s perfect for a relaxing afternoon.

Everyone has what they like, but sometimes you want to try something new, and you don’t know if that “new thing” is going to be as good as the old. That’s why you need someone you can trust to fill you in, and give you good advice. Someone who knows what they’re talking about.

And if you’ve had LA Kush’s kush, you know they know what they’re talking about. So when you’re in the mood for something new, head to their spot on Alvarado, and check out their selection. If it’s there, it’s got to be good.

As the marijuana industry marches towards being a more legitimate enterprise, more players are entering the game every day. New shops, new growers, new brands, new products. But since things are still a little like the Wild West around here (with the Bureau of Cannabis Control acting as our own modern day Pinkerton’s), there’s the feeling that not everyone is working above board.

Shops get shut down due to lack of permits. Brands make splashy ad sales for products that don’t deliver. Growers harvest flowers that don’t live up to the marketplace standards. With all of these variables, you need something (or someone) that you can trust. Someone like, LA Kush.

LA Kush isn’t just a brand. Sure, they grow their own weed and they operate their own storefronts. They also stock their flower in other people’s stores. Needless to say, they’re out here. They’re a proven name. They’re quality you can trust.

Stepping into the store on Alvarado Street, though, was a whole different experience. This was a well-designed space, but it wasn’t the “LA Kush Show” the entire time. Besides stocking their own products, LA Kush pays it forward by having tons of product displays inside their showroom. It feels almost like an old-school department store make-up section.

The display case is broken up, not just by product type, but by brands. Each case might have a large selection of products from one particular brand -- Stiizy, Cru, Canndescent, King’s Garden, Bloom Farms, Pure Vape, etc. -- along with several other related products filling out the space.

We think that’s cool because, for a really long time, LA Kush was just another brand that we saw in other dispensaries. And through time, word-of-mouth, and killer bud, they’ve ascended to this place of respect and authority. And they’ve used that reputation for good by opening their own dispensary, and using their power to help out other brands.

As we browsed around the store, we saw several products (and brand names) that we were familiar with, but we also saw a few that were new to us. And we could tell right away that if LA Kush cared enough about them to have them on display, then they must be good. Just having a spot at the table was enough of a stamp of approval for us.

We dug the vibe inside LA Kush. It’s a store that’s designed for you to look over everything -- not to just find some random strain and buy it. Feel free to look around and see what they’ve got, because there’s plenty of stuff that might be new and exciting to you. Who knows, you might just find the thing that you’ll never want to be without.

In our case, the thing that we didn’t want to leave without on this visit was some Hybrid flower grown by King’s Garden called, Gelato.