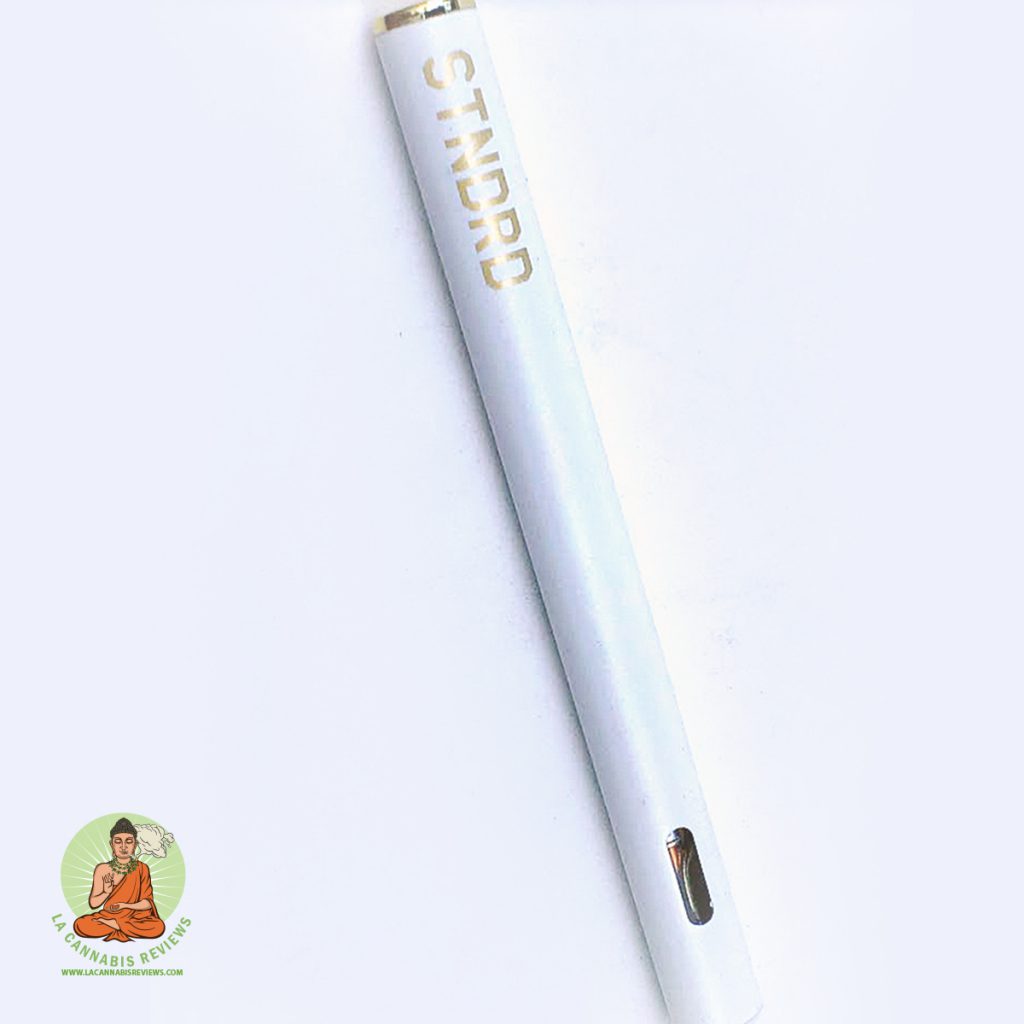 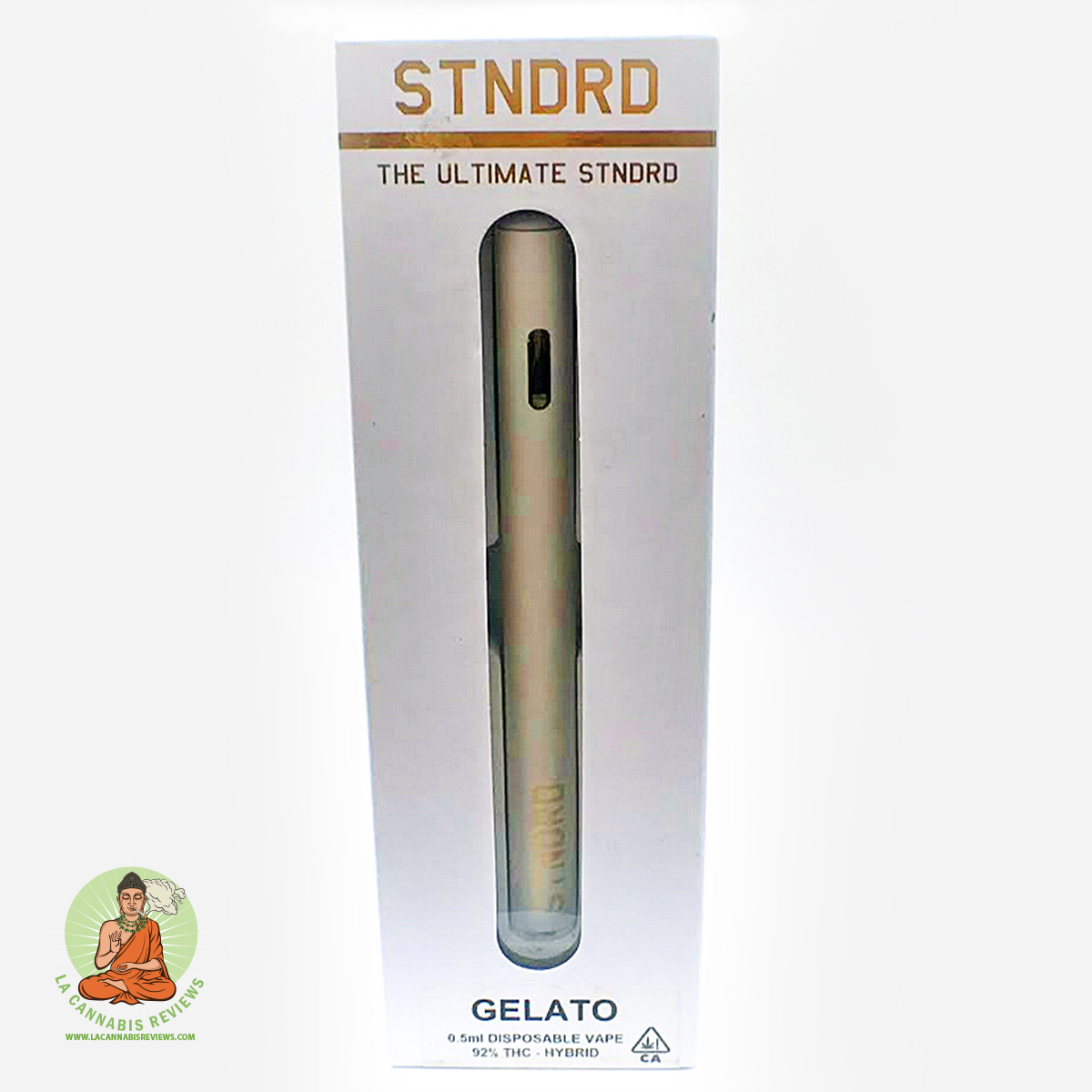 Appearance
This vape pen has a really cool look 100%
Aroma
It might not be invisible, but it is odorless 100%
Taste
It’s neutral, but acrid, with a kind of “balloon rubber” taste 80%
Effect
This packed a really strong punch 80%

Stndrd Disposable Vape Pen - Gelato - Hybrid
Based out of Los Angeles, the Stndrd Vape company provides a slick, well-designed disposable pen that comes packed with 0.7g of concentrate. While we were at Dope Girls LA, we saw they had a variety of strain types available. For whatever reason, the Gelato stood out to us on that day, so that’s what we went with.

Appearance 5/5
We think this vape pen has a really cool look. Unlike the Pure Disposable Pens that go for solid colors or pop art graphics, the Stndrd line of disposables are plain white. Elegant and simple, they remind me of an old school iPod, or something the Svedka robot might smoke at a party.

There’s also a small window where you can view the oil level remaining inside the pen. This is great, because there’s nothing worse than puffing away like a chain-smoker trying to confirm that your pen is, in fact, dead.

Aroma 5/5
As with most vape pens, there’s no scent or fragrance that’s detectable from this. Anonymity is the name of the game here, and this vape gives nothing away, even as you exhale the vapor into the air. It might not be invisible, but it is odorless.

Taste 4/5
We didn’t get much of a taste off this vape. To be honest, all vape concentrates taste kind of the same to us. It’s neutral, but acrid, with a kind of “balloon rubber” taste that always flies like aerosol into the back of our throats. It’s not the worst, but we’d rather burn flower.

Effect 4/5
We’re mostly skeptical about how vape pens actually affect us, so we decided to hedge our bets and select the Gelato flavored pen, which is loaded with a Hybrid concentrate.

Despite tasting like every other vape, this packed a really strong punch. Much stronger than the other disposable vapes on the market. Each individual puff felt full of THC, and it took fewer drags on this pen to get us feeling high than with others. The Hybrid Gelato gave us a head buzz and a nice body sensation, but they were mixed evenly together. It was just an overall serene feeling that really mellowed us out.

We enjoyed puffing away on this disposable vape pen. It was our first experience with the Stndrd product line, and we were very impressed by not only the design, but the intensity of the concentrate that was packed inside their product.

Would we be happy if vaping replaced smoking, as the common method of marijuana ingestion? No, I don’t think so. It’s too sterile, and the vapor isn’t as tactile, nor as satisfying, as smoking herb. But we do enjoy vaping every so often, and we’ll be reaching for our Stndrd pen the next time we’re in the “mood.”

While I don’t normally vape, I must admit that the disposable pen is the more attractive option. It’s infinitely easier, plus it’s cooler than vaping with a cartridge and battery combo, in my opinion.

Buying a vape cartridge always seems like a great idea at the store, but once I get home, the hunt is on for a battery that still has some charge left to it. Which usually winds up being none of them, so it becomes a hard target search for one of those USB chargers. Even though each battery comes with one, I can only seem to find a couple (if I’m lucky). And of course they’re not compatible with all batteries, so you’ve got to find the “right one.” Then you’ve got to charge it for a few hours until you can actually use your vape pen.

All this unwanted hassle often makes vaping more trouble than it’s worth.

That’s why the disposable pen is a thing of beauty. All the ease of having a vape with none of the upkeep. Just simply unwrap the package and start puffing away until you can’t puff anymore. Then, just toss it away and move on with your life. However, this might be the most problematic part of the disposable pen promise, simply because we hate excess waste and its effects on the environment. So, while recycling the leftover material is always on our minds, the notion that we could just toss it away is so romantic that it doesn’t even matter.

Even though they don’t say it, the disposable vape pen is really made for novice smokers, casual users, or anyone who doesn’t have the patience (or attention) to keep all their cartridge/battery/charger equipment together.

There are plenty of people I know who would never smoke marijuana, even if it was one hit at a party, because they’re either identified as non-smokers, or would have an adverse reaction to it, like extreme sleepiness or disconnection. But these same people puff, puff, and pass the disposable pen without blinking an eye. Perhaps, it’s because there’s no stigma attached to it, or maybe the vapor feels cleaner (and possibly less potent) than the smoke, itself. That’s the valuable niche they fill, and who knows, maybe someday vaping will be more common than smoking. Only time will tell.