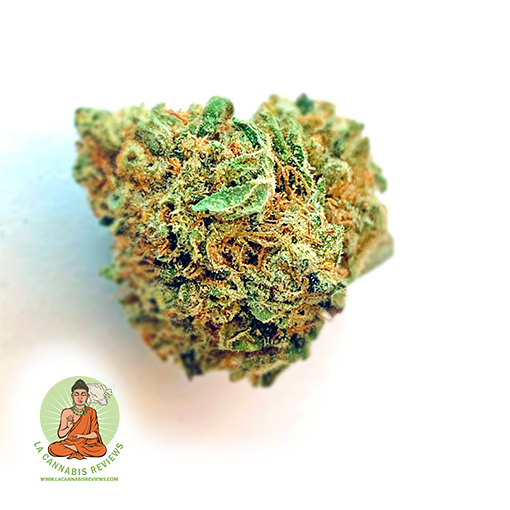 Appearance
The green was medium light, with dark orange tendrils along the sides 100%
Aroma
Very strong lemony citrus kick on the back end 80%
Taste
It tastes earthy and smooth 80%
Effect
This strain turned out to be powerful enough to take me to the Dark Side 80%

There are not many characters from pop culture that deserve their own marijuana strain, but somehow there’s at least three we can think of from Star Wars alone. There’s Skywalker, Master Yoda, and now this offering known as Darth Vader OG. Would this Indica be powerful enough to woo me over to the Dark Side? I was willing to take the chance. So strap on your respirators and “May the Force Be With You.”

Appearance 5/5
This plant sure doesn’t look like it belongs to the Dark Side. This flower had a great look. The pods were round and lush with spiky little leaves all over them. The green was medium light, with dark orange tendrils along the sides, and there was lots of white, fuzzy crystals all along the surface. And while the pods we got from the Dank had more stems among them than we normally like to see, the flower itself looked so good that we weren’t concerned.

Aroma 4/5
While this plant looked great, it only smells okay. It’s got an earthy aroma with a very strong lemony citrus kick on the back end. Besides that, it was an extremely pungent aroma that felt like it packed a concentrated punch. I hoped that this power would translate into a strong effect, but sometimes these things don’t always work out that way.

Taste 4/5
This smoke starts with a big flavor on the inhale, but then dissipates into a barely-there aftertaste. It tastes earthy and smooth, as you first take a drag. As you exhale, you’ll notice a light coating of flavor on your tongue, including a very slight hint of that aforementioned lemon aroma.

Effect 4/5
This strain turned out to be powerful enough to take me to the Dark Side -- or rather, the Sleepy Side.

I felt a strong Indica sensation off this strain. It was a powerful hit that made me feel sleepy almost immediately, despite the fact it was the middle of the day. It was part “head buzz” and part “physical alleviation.” The result was something that made me want to fall fast asleep -- my eyes were droopy, my brain felt slowed down, and my muscles just wanted to chill out and relax. While I shouldn’t be surprised to feel these things from an Indica, I usually prefer a strain that gives me a little more energy, so I was slightly disappointed by how much of a “downer” this flower turned out to be.

This Darth Vader OG didn’t really do it for me, but I can absolutely recommend it as a sleeping-aid for anyone who might be searching for that kind of thing.  It’s very much an end-of-the-day, right-before-bed type of smoke.  Maybe someone with high anxiety might find it soothing, but even regular stoners will still feel knocked out by this Indica.  Don’t sleep on how strong this one is, or you’ll find yourself sound asleep.

I’ve been late for work before, and I’ve always hoped for the grace of others to understand that sometimes “sh*t happens.”  Maybe if it had been another type of store, it would be different.  But when it comes to weed, most people are pretty chill.

Plus the budtenders hooked up a little extra weight in our bud for the trouble, which is always appreciated.  That’s the kind of shop that Dankilicious is -- not a corporate retail space.  It’s a shop made up of people that are very human, who know how to make up for their mistakes.

I pulled into the parking lot around 11:15 am. It was one of those August days in Los Angeles that makes everybody wish they had better air conditioning. I was out running errands and anxious to get back home before high noon, when the sun would come out and demand a showdown with your sweat glands. I was nearly home, I just needed to stop at Dankilicious for some bud for that afternoon. Then I would be on my way.

As I walked across the lot, I noticed that the shop’s steel door looked fully shut. That was odd, I’ve usually seen it hanging open. I never made it to the door. At the foot of the stairs, a voice called out to me from a parked car. I recognized her as one of the budtenders. She had her dog, a white collie, also known as the Dankilicious Shop Dog, in the car with her. She told me the shop was closed because the Security Guard wasn’t there, and she needed to wait for him before she could open up. Ten minutes.

That’s when I noticed everyone else in the lot. They were huddled in the shade, or they were sitting in their cars with the A/C blasting. All of them waiting for the shop to open. I wondered how long they had all been there.

I got back into my car and decided I would wait, as well. Sure, there were other shops in the area, and they were good shops too, but I came to Dankilicious because I wanted their bud and their prices. They sell flowers by whatever quantity you want, pulled right from their jars. Most shops in Mid-City (especially after some recent raids) were now only selling brand-name bud at marketplace prices, plus tax. At the Dank, you could still get an old school eighth for a simple price. That’s where I wanted to shop, and that’s why I was stuck around waiting for the Security Guard to show.

Eventually, the Guard did arrive, and I was glad that I waited around. The waiting room had a very friendly vibe that morning -- we had all survived the heat, and we felt like we had earned our bud for the day. And there was no jockeying over first arrivals or who would go in before who; everyone was just happy to be out of the heat.
Once we got inside the shop, we finally got to see our flower. And oh boy, did it feel great. They had a generous selection that day -- maybe they had just gotten in a fresh shipment -- but we saw a ton of flowers in big jars that were all nearly full. That made it really easy to smell and see the goods. But of all the things I saw, nothing captured my attention quite like this Indica strain of Darth Vader OG.