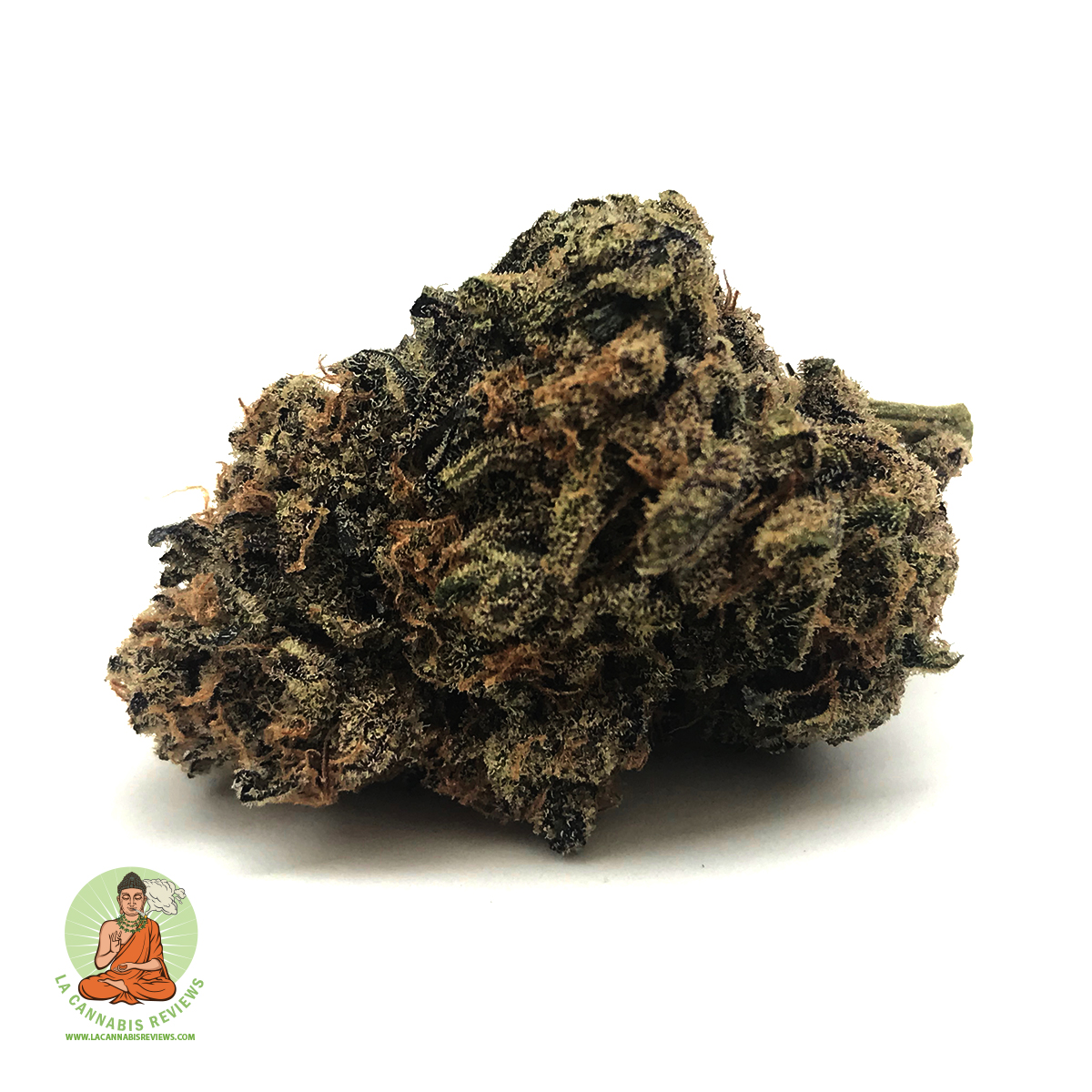 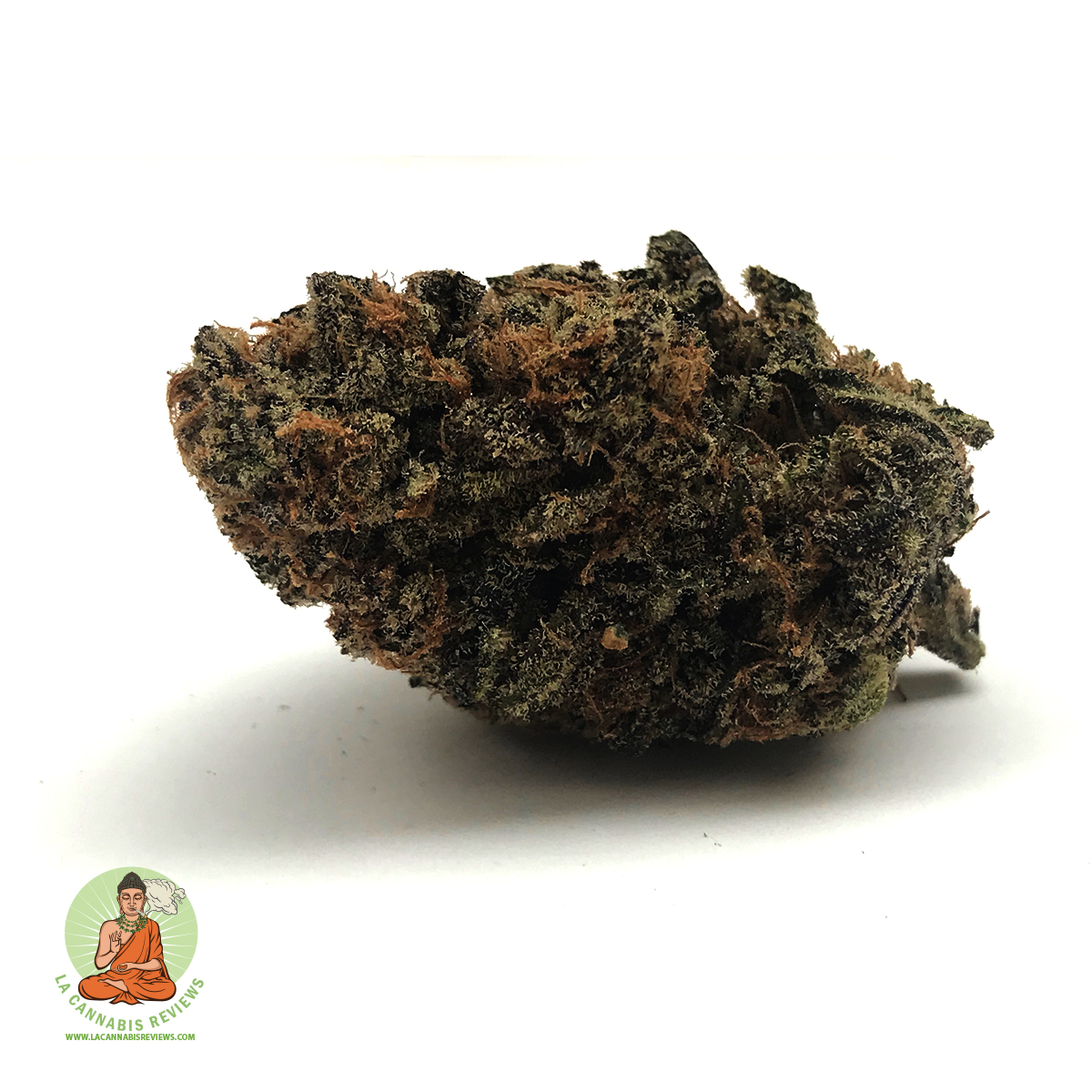 Appearance: 5/5
It’s got an absolutely fabulous look -- green leaves, orange pockets, rivers of purple-blue, all dusted with a diamond sparkle crystal. This weed looks and smells so good, that we thought it was a shame to even load some into our bowl. We just wanted to hang out in a garden of Blueberry Shortcake, getting high off our eyes and the smell of this sweet bud.

Aroma: 5/5
With this weed, the smell is everything. That’s where it’s name comes from, at least as far as we can tell. It was super strong, and we couldn’t stop going in for more sniffs. It was incredible.

Flavor: 5/5
It’s got a really strong fruity flavor that pops like a blueberry, and a sweetness from the crystals that give it a warm, buttery birthday cake taste.

Effect: 5/5
That feeling only lasted so long before we took a hit. This strain provides a powerful high. A full-bodied feeling that gave us a bit of that tunnel-vision focus that’s perfect for a movie, or a chill night at home. It was strong, but not overwhelming. We were focused, but not lost. We were stoned, but not wrecked on the couch. It was all so finely calibrated. The best possible version of what a designer marijuana strain is supposed to offer. This strain comes courtesy of Flawless Pharms, and our hats are off to them for crafting such a fine plant, with well-designed high.

Our nickname for this strain eventually became Aquabud. Because, at times, we were so stoned we felt like we were underwater. It’s also worth noting that this high lasted for a long time from just one bowl. So keep in mind that a little goes a long way with this potent plant.

Long story short -- we genuinely believe this is one of the best buds we’ve smoked in quite a long time. Blueberry Shortcake, we love you. We’re clearing off a special spot on the shelf for you, and look forward to celebrating long days (and holidays) with you for a long time. Welcome to the family.

Hollywood High Grade is an impressive shop that makes a strong, ultimately bad impression. Their security is next level. Their set-up is meant for the masses. And their weed selection is big, but perhaps too big.

We can’t deny that they’ve got a lot of impressive products on display, and we absolutely love the plant that we picked up here. But we’d be remiss if we didn’t mention that the whole menu seemed to be on the pricey side, and the lowest quantity of marijuana we could purchase was an eighth.

Call us crazy, but we like to buy a few grams and test out new flavors when we visit a shop. With only eighths available, combined with the high-end prices, that meant we were only able to sample one bud from this location. That being said, this is a well-stocked shop that will satisfy your needs, but it might not be for us. We can’t say that we don’t recommend it, but we also can’t say that we will shop here again.

They might call Los Angeles the “City of Angels,” but it’s a town with a lot of broken dreams and bad vibes underneath it. And if you know anything about the stretch of Santa Monica Blvd. near La Brea Ave., where Hollywood meets the City of West Hollywood, then you know it’s a neighborhood known for indiscretion. We went down there to visit Hollywood High Grade, and while it’s one of the most famous and long-running marijuana dispensaries in town, we were immediately bracing ourselves for the unpleasant experience that this shop unfortunately delivered to us.

First, the good news -- there is a parking lot, which is perfect for a neighborhood that’s mostly warehouse offices and production houses. This shop lives inside a converted warehouse that definitely fits in with the block. While there’s brand-new apartment buildings, a Target, and an outdoor mall within walking distance, it somehow feels like a world away, as you enter the (usually) open front entrance.

As we stepped into the waiting room, we were immediately greeted by a Security Guard. It’s not unusual to see Security working at these shops, but it’s not everyday that one of them waves a metal-detecting wand all over your body before you even put your name down. At this point, we thought that High Grade was taking the Hollywood part a little too seriously. We wanted to buy weed, not gain entry into some hip nightclub.

After we were cleared to move on, we checked-in at the desk and had a seat on the long leather couch. It was so long, we felt slightly ridiculous sitting on it by ourselves. There were TVs and iPads fixed to the walls, not to mention ample seating. This shop obviously was designed to accommodate a large number of people all at once. When we dropped in during a weekday afternoon, we had the place to ourselves, and it was only a few minutes before we were allowed inside.

Entering the showroom requires going through two doors separated by a short hallway. We’re usually not the paranoid type -- unless we are really stoned, that is -- but all this increased security was making us nervous. What exactly were we getting ourselves into here? We just wanted some good bud, not necessarily some stuff that required a high-level security clearance.

Once inside, the first thing we noticed was a stanchion waiting line snaking around the middle of the floor. This had us thinking about the DMV, which is not how we like to feel about our weed shopping experience. Thankfully, the line ahead of us was non-existent, so we bypassed the maze and went straight to the front. But we’d hate to be here when that thing was even half-full.

The next thing we noticed was a display table from Bloom Farms set up in the room. There were oil cartridges on display, along with a special promotion that afternoon for a free battery with purchase. We thought that was pretty cool, and gave the product a quick glance before heading to the front.

We were really impressed with the selection of flowers this shop had on display. If anything, they had too much of it. The plants are kept in small sample jars with names, types, and prices printed on it. They are kept in two rows, inside a glass case displayed at eye level for ideal browsing effect.

Our budtender allowed us to handle the jars, so we could inspect the bud and smell the goods. Unfortunately for us, there was an overwhelming amount of weed being shown off. Too many jars were packed too tightly into this display case. All of them were trapped inside identical show-jars, too. Some of them were stacked two deep, making it impossible to even get a glimpse at everything they had to offer. While we’re not afraid to ask for recommendations while shopping, we believe that part of the fun of visiting a new shop is looking around and finding things that pique your interest.

We didn’t get to do that here, so we asked our budtender for some guidance. They pointed us to a wonderful, powerful little strain called, Blueberry Shortcake.