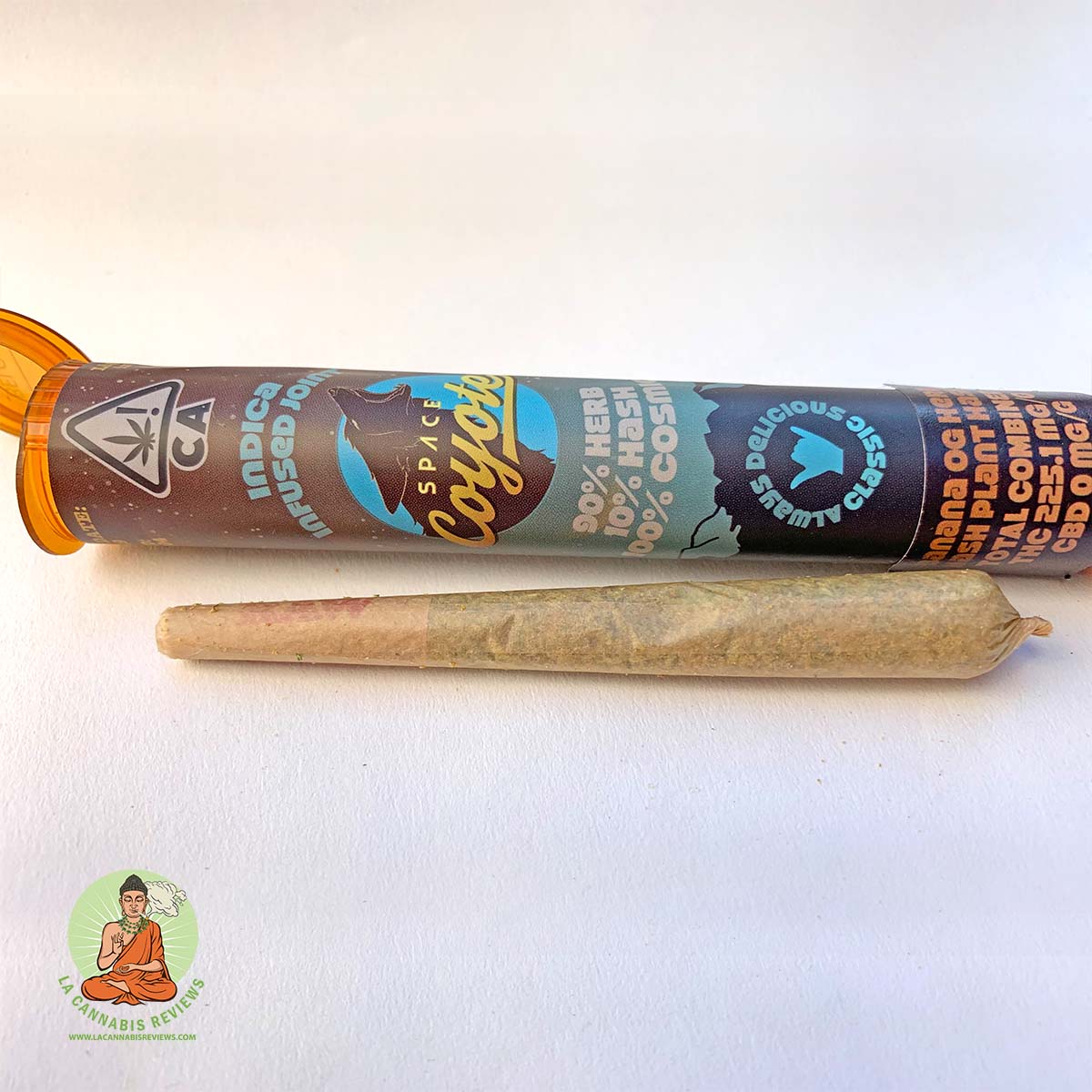 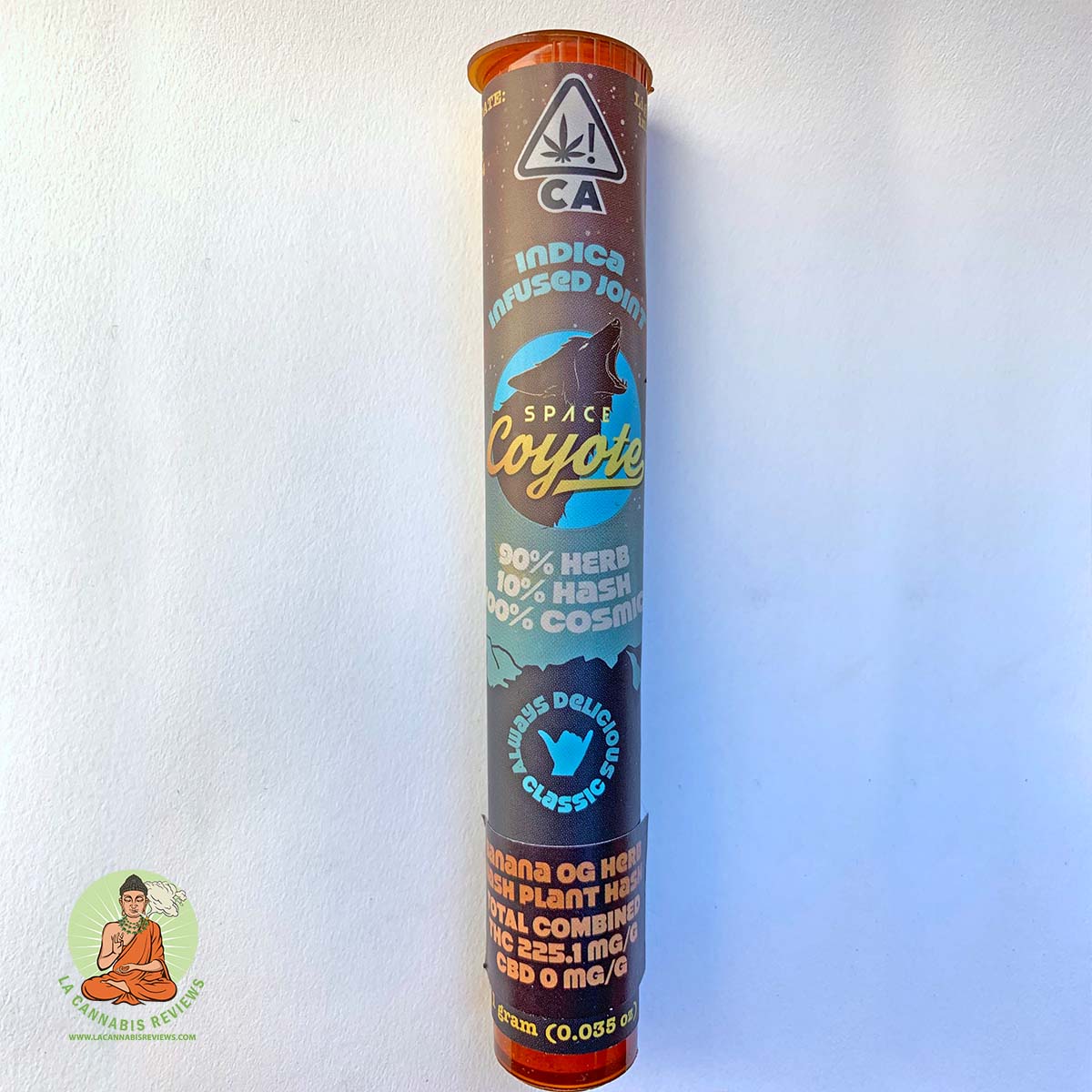 Appearance
The cone wasn’t packed tight, and there were creases and weak spots running along the sides. 80%
Aroma
It was delicious and we loved it 80%
Taste
Brown sugar and vanilla flavor 60%
Effect
It was a great feeling 80%

Coyotes are pretty cool, but a space coyote? Man, that sounds really cool. And so does this pre-rolled joint. This brand is new to us, but they boast an “Indica Infused Joint” with 90% Banana OG herb and 10% Hash. How would this combination suit us? Who knows?

Oh wait, we do. Keep reading!

Aroma 4/5
Floral and kind of tasty, the scent of this joint didn’t give off much of a banana vibe, to be honest. Instead, it smelled like a lotion we might find at Bath and Body Works. Don’t get us wrong, it was delicious and we loved it. But our first instinct was to rub it on our hands, not to smoke it.

As we smoked on, the hash that was supposed to give this flower “a kick” wound up kicking us in the throat. Not only that, it started to canoe as soon as it was lit, and the ride only got bumpier from there.

Effect 4/5
Ultimately, this Indica felt more like a Sativa when things were all said and done. It was an “upper” - making us feel very creative and focused. We were also energized and quite gabby as well. It made us want to save this for the next time we needed to get creative work done or possibly entertain. It was a great feeling, but it didn’t feel like we got the Indica that we were expecting.

We have very mixed feelings about this one.  We dug the effects, but they weren’t what was advertised.  We like the aroma and taste, but the ten percent hash nearly killed out throats, and made us question whether or not this joint was worth the trouble.

We’ll recommend it, but with some caveats.

We may sound like an old man, but we like how MedMen is changing the game.  If they can offer all the products that we like to buy at shadier dispensaries with a guarantee of expertise, they might not be so bad after all.

To be honest, we don’t shop at MedMen because we don’t really think it’s for us. Not to say that we haven’t tried it before, but our past experiences have only reinforced our suspicions -- this isn’t the type of dispensary we want to shop at.

MedMen is corporate. MedMen is high-end retail. MedMen has no soul.

Or, at least, that’s what we thought. Until we paid a visit to the DTLA location.

We weren’t trying to go there. We were just downtown that day and suddenly remembered that we needed something to smoke. It was the closest spot, and we were on a time crunch. It would have to do. But would they even have what we were looking for?

We like dispensaries that feel like a neighborhood quick-stop, not an Apple Store. We usually want to pop in, grab some bud or a pre-roll, and be on our way. The last time we went to MedMen, we saw lots of stuff displayed in tiny jars with iPads on the table. Sure, that’s cool and all, but that’s just not the vibe for us. We know what we want, and we just need to know if there’s variety. Simple. There’s no need to involve an iPad in this transaction.

Lucky for us, we didn’t have to at the DTLA location. We saw all the typical visual cues of a MedMen establishment -- display tables, iPads, magnifying show-jars, a wall of products, a drink cooler, swag, a gift shop, etc. But we didn’t see any pre-rolls, which is what we came for.

Sometimes it’s frustrating to ask for help, but we didn’t need to -- it came to us. We were met by a MedMen employee who asked if we needed any assistance.

When we asked about pre-rolls, we were told that they had a bunch of them. Not just big brands like Lowell Smokes and Tarantula, but smaller labels that we had never even heard of before. We were surprised at how many were available, and the MedMen employee answered every single one of our questions about them.
Honestly, it was really cool. It’s nice to know that you’re talking to an expert, and this place was literally full of them -- all identically dressed in red, waiting to assist you. With their guidance, we were able to find something that we’d never seen before, and it looked great -- a joint packed with Banana OG flower and hash, made by Space Coyote.