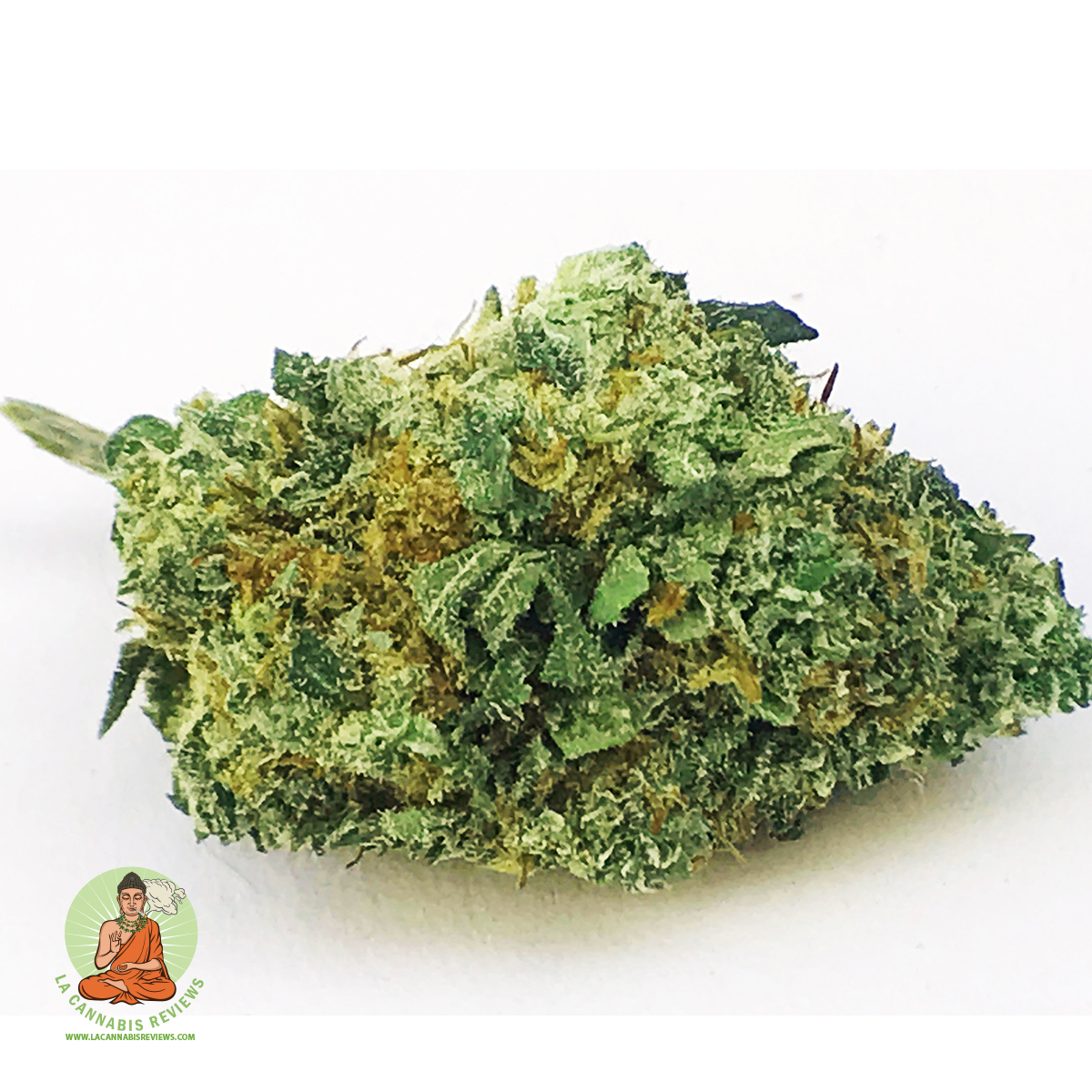 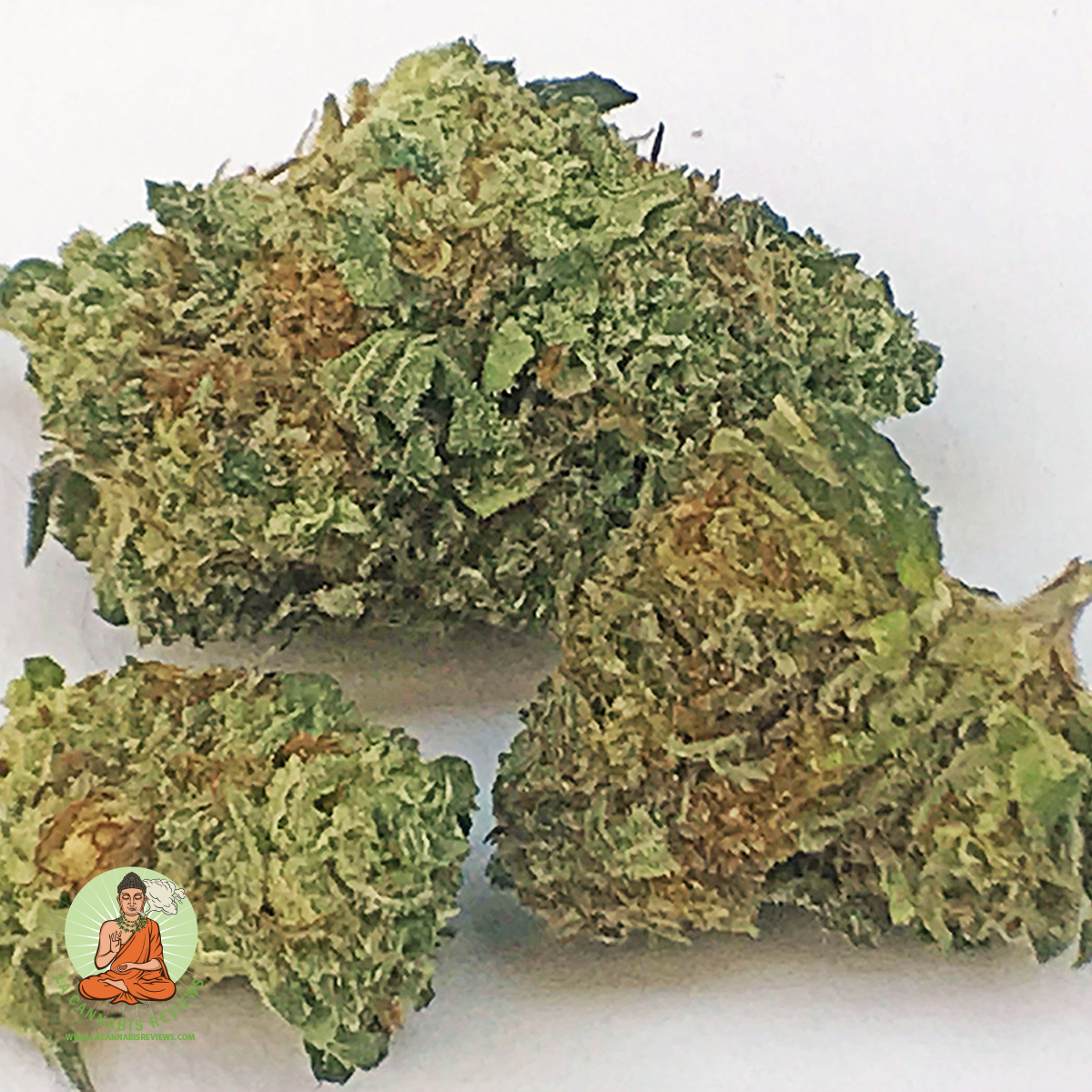 While we like to think of ourselves as enthusiasts, not experts, we must admit that Alaska does not spring to mind when we think about marijuana. We suspect that the discordant nature of this strain’s name comes primarily from the fact that the words form the decidedly tongue-in-cheek acronym, “A.T.F.” - which is normally short for “Alcohol Tobacco and Firearms” a government agency that used to be known for raiding cannabis clubs back in the day.

Appearance: 4/5
While Alaska usually makes us think of the frozen tundra (immortalized by the 1991 Disney classic, White Fang) we saw only green (and orange) when putting this flower under the microscope. The leaves carry a medium shade of green that flashes lighter on the underbelly. There aren’t many crystals on the plant, but the bursting orange tendrils cover a lot of surface area. The combination of colors gives this flower a bold, vibrant look.

Aroma: 3/5
While the real ATF is notorious for sniffing around, we wondered how they would feel about this strain, and it’s wonderfully unique fragrance. We discovered a sweet aroma that had hints of berries to it. In fact, the scent reminded us of strawberry milk. Not our favorite beverage, but a cool, fun odor that made us excited to smoke this strain even more.

Taste: 3/5
Unfortunately, once we started smoking this strain, that strawberry milk aroma turned into a sour experience for our taste buds. Our inhale was sharp and harsh, but our exhale had hints of that strawberry sweetness we were smelling previously. But the aftertaste it left in our mouths was acrid, bitter, and, um, not our favorite. We were reaching for a beverage to wash away that flavor, and recommend that you have one on hand, too. Unless you enjoy drinking sour milk.

Effect: 3/5
Despite the rude awakening we experienced as we smoked this flower, its effects were enjoyable, but that’s where the positives end with this bud. “A.T.F.” is a Sativa strain, and it was hitting us with only a mild Sativa-like high. We were focused and calm, but we were coming from a fairly relaxed place already. If we were really stressed out, or if a user was trying to medicate against anxiety or other ailments, we wondered how much this strain would actually help.

Despite its big name and somewhat nortorious reputation, we came away from this smoke session of Alaskan Thunder Fuck feeling like the name was a bit of an overhype. This Sativa strain produced a calming effect that was disappointingly mild to our taste. While we might not have anything bad to say about this bud, we’re not going to be singing its praises around town, either. A good strain, but not one we’ll be looking to buy again.

Our trip to Angels Kush didn’t turn out the way we planned. First, the dispensary was missing. We found it quickly, albeit with a different name and a selection of products that paled in comparison to the menu that was listed online. We know, we know -- you can’t believe what you read on the Internet.

But still, reliability and consistency are virtues we value in a dispensary, as well as, quite frankly, properly listed addresses and upfront information. While our shopping trip turned into an adventure, we didn’t discover anything that was truly exciting or noteworthy. HMU is just another dispensary, and one that forces you to jump through unnecessary hoops. Is that a reason to shop somewhere else? It might be. But if you’re looking for a little adventure in your shopping, go searching for the elusive Angels Kush and see what you find.

Despite the laws that have been passed and the stigmas that are gradually being erased, buying weed in Los Angeles can still be sketchy. It is the Wild West, after all. Most shops go through the proper channels, but some forgo the permits solely for the opportunity to make some fast cash before they get raided and shut down. We’ve seen plenty of shops come and go over the years, and they’re usually the ones that cut corners or simply do things in a less-than-professional manner. That’s where we found ourselves last weekend, driving into the heart of Koreatown, in search of Angels and their mighty fine kush.

This place has been on our radar for some time now. Quite literally -- it pops up on Weedmaps all the time. Both close to our neighborhood, yet totally inconvenient, this was a spot that we always considered, but never found ourselves visiting. That is, until the other day, of course. We arrived at the address and were surprised to find not one door -- but a bunch of them. The address belongs to a shopping plaza, with no unit number listed for the dispensary. We took a quick scan over the signs, but there was no Angels Kush. Not even a green cross to guide the way.

Hmm. Thinking we had made a mistake, we double checked the address on Weedmaps and Google Maps. Nope, we were in the right place; but Angels Kush wasn’t. Well, shame on them, but that was going to leave us high and dry (actually not high, just dry).

Before giving up, we realized that this couldn’t have been an overnight occurrence, and somebody else must have been in this same predicament already. A quick scan online revealed that some helpful user had already posted the proper address in the comment section. It was the plaza next door, second floor. Above that entrance was a pink sign that read ‘HMU.’

We soon found ourselves inside an oddly shaped room -- first a narrow hallway into a wider space -- painted all white, with a plush white couch, and a Security Guard seated behind a massive desk. At least this was starting to look familiar. We checked in, dropped our bags, and headed into the showroom.

After the bright white waiting room, the showroom was all black. There were windows, but they were covered by shades, keeping the light exposure to a minimum. This is room was dominated by a large display counter. The budtender was seated behind it, casually filling cones to make pre-rolls.

It took no time to look around, because this place had very little product to show us. There were some pre-rolls, concentrates, vape cartridges, and an entire wall dedicated to showing off pipes. We saw no flower, but there was a paper menu left on the counter. It listed prices and quantities for the plants they had available, which were limited to less than ten strains in their entire inventory. Considering we had fallen in love with the large menu listed on Weedmaps, this was a huge disappointment.

But it might not turn out to be a fatal one. Our budtender was helpful, and she happily stepped away from her pre-roll rolling duties to show us the plants we asked about. And in seconds one particular strain caught our eye: Alaskan Thunder Fuck.